FacebookTwitterWhatsAppEmail
Mohammed Rafi (24 December 1924 - 31 July 1980), whom the world calls Rafi or Rafi Saab, was one of the finest playback singer of Hindi cinema. For the abundance of the melodrama and range of his voice, he distinguished himself among his contemporary singers. He is also called as Shahanshah-e-Tarannum. Mohammed Rafi's voice inspired many singers in the upcoming days. The name of Sonu Nigam, Muhammad Aziz and Udit Narayan is notable, though many of these are now their separate identities. He sang 26,000 songs from the 1940s to the early 1980s. These include songs written in Ghazals, bhajans, patriotic songs, qawali and other languages ​​besides mainstream Hindi songs. Those actors who were filmed on their songs include singer actor Kishore Kumar, among others including Guru Dutt, Dilip Kumar, Dev Anand, Bharat Bhushan, Johnny Walker, Joy Mukherjee, Shammi Kapoor, Rajendra Kumar, Rajesh Khanna, Amitabh Bachchan, Dharmendra, Jitendra and Rishi Kapoor. On December 24, 2017, on the 93rd birthday of Mohammad Rafi ji, Google dedicates his memoirs to his songs and memories by making a Google doodle in his memory. This doodle was created by Mumbai painter Sajid Shaikh.

"Mohammed Rafi" is at the 1st Position in this list. 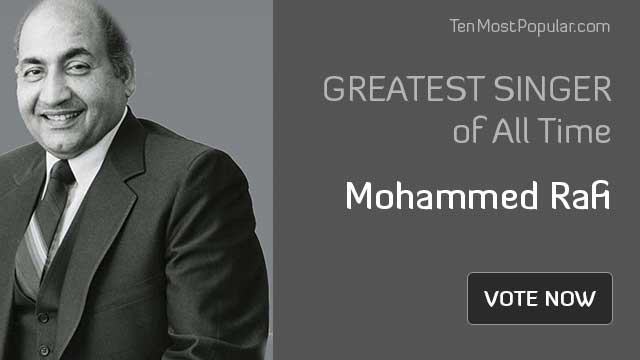 Total Votes: 9870
Votes received:581
Up votes:468
Down votes:113
5.46% Popularity
81% Up votes
19% Down votes
Go to voting page
Comments on Mohammed Rafi
Submit
Cancel
10 Comments
Mukesh Golden voice put all these morons to sleep
3
0
Reply
MD Rafi sir best India singer
1
0
Reply
Mohd Rafi number one without any shadow of a doubt. Made 3 rated actors into hero's with he's gold controlled silky smooth voice.We have sadly lost much material specifically in the 70's when many conspiracy have been wedged to keep him away, when the golden bollywood era arrived for the very first time...
1
0
Reply
Rafisahab.illoveyu
1
4
Reply
Rafi sir bahut up down ho rahe hai.... Abhi 5th position par hai.... Inhe to 1st position par hona chahiye
1
6
Reply
hmm.... he got 2 up vote and 5 down vote.... fuuuuu
1
7
Reply
Rafi on 85, are you kidding??
2
9
Reply
View 1 reply
Rafi is on 279 not 85. You blind person the very last position on this list. Don't tell this to psychotic rafi fans they will get heart attack. Lolololololololololo
0
0
Greatest Ever
2
12
Reply
Greatest playback singer of India
1
12
Reply