FacebookTwitterWhatsAppEmail
Kishore Kumar (born Abhas Kumar Ganguly, 4 August 1929 - October 13, 1987) is a script writer, director, producer, composer, lyricist, actor and Indian film playback singer. He is considered one of the most successful playback singer in the Hindi film industry. He sang in several Indian languages like Bengali, Hindi, Marathi, Assamese, Gujarati, Kannada, Bhojpuri, Malayalam, Oriya, and Urdu. He also sang on personal albums in several languages ​​especially Bengali which were recorded as an all-time classic. He won 8 Filmfare Awards for Best Male Playback Singer and won the record for winning the Filmfare Award in that category. He was awarded the "Lata Mangeshkar Award" by the Madhya Pradesh government and from that year, the Madhya Pradesh Government made a new award called "Kishore Kumar Award" for contributions to Hindi cinema.

Kishore Kumar was born in a Ganguly Bengali family in Khandwa, Tengah Province and Berar (now in Madhya Pradesh) under the name Abhas Kumar Ganguly. His father Kunjalal Ganguly (Gangopadhyay) was a lawyer and his mother Gouri Devi comes from a middle class Bengali family. Kunjalal Gangopadhyaya was chosen by the Kamavisadar Gokhale family of Khandwa to become their personal attorneys. Kishore is the youngest of four children, three others are Ashok (eldest child), Sati Devi, and Anoop. When Kishore was a child, his brother Ashok became a Bollywood actor. Then, Anoop also entered the cinema with the help of Ashok. Having spent time with his brothers, Kishore became aware of the fields of film and music. He became a fan of singer-actor KL Saigal, whom he considered his teacher.

"Kishore Kumar" is at the 2nd Position in this list. 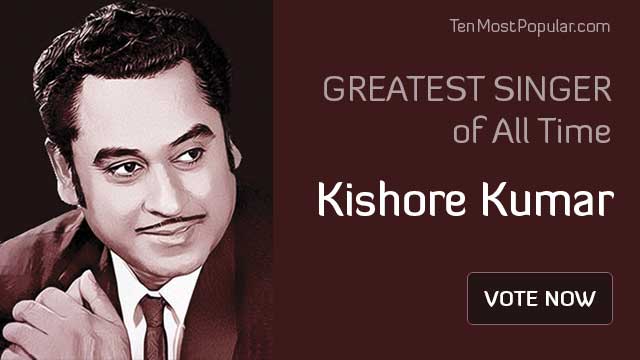 Total Votes: 9565
Votes received:370
Up votes:277
Down votes:93
3.34% Popularity
75% Up votes
25% Down votes
Go to voting page
Comments on Kishore Kumar
Submit
Cancel
9 Comments
Kishore kumar deserves to be no 1 He is the greatest singer of Asia if not the world.I am Really Pleased with the ranking
1
0
Reply
Best singer of The World.This man can do anything
1
0
Reply
View 1 reply
What the f*** are you people smoking???? Mukesh the greatest
0
3
Kishore Kumar was and always be the one and only greatest singer . No one else exist.
0
0
Reply
God of singing Kishore Kumar Pranam karta hoon aisi mahaan anubhuti ko 🙏🙏🙏🙏🙏🙏🙏🙏🙏🙏🙏🙏.
0
0
Reply
Kishor kumar india no.1 singers hai
0
0
Reply
You people are fucking stupid. Ravi has no voice. Kiss ore is a clown
0
0
Reply
not better then sonu sir
0
5
Reply
You are all fu**ing morons. Mukesh was and will always be the best singer
0
5
Reply