FacebookTwitterWhatsAppEmail
Kavita Krishnamurthy (born 1958) is an important playback singer of Indian cinema. When Kavita was eight years old, she won the first prize in a singing competition. From then on, she had grown up dreaming of being a famous singer. She was awarded the Padma Shri on 2005.

Kavita, a popular playback singer in Hindi cinema, was born in 1958 in New Delhi. She got her early education in the house. She later learned classical music from Balram Puri. At the age of nine, Kavita got the opportunity to sing a song in Bengali with Lata Mangeshkar. From here she decided to come in the field of playback.

While graduating at St. Xavier's College in Mumbai, Kavita used to take part in every contest. This was the time when in a program famous singer Manna Dey heard the song and gave her an opportunity to sing in commercials.

In the year 1980, Kavita sang her first playback song "Kaahe Ko Byaahi Maang Bhabro Sajna" However this song was later removed from the film. In the year 1985, the songs of the film 'Pyaar Jhukta Nahi' gave her recognition as a playback singer. Subsequently, Mr. India's song "Hawai Hawaii" and "Karte Hai Hum Pyaar" gave her super hit singer status. In the 90's, Kavita Krishnamurthy emerged as a leading female playback singer of Hindi cinema.

Her songs sung in Film "1942: A Love Story" are still liked today. In her career, she got chance to worked with Anand-Milind, Udit Narayan, A.R. Rehman, Anu Malik liked singers and music directors. Kavita once said in an interview that in the childhood, actor Dilip Kumar was very much liked. She also like Sanjeev Kumar, Amitabh Bachchan and Aamir Khan.

In actresses she like Sridevi, Rani Mukherjee, Kajol and Preity Zinta. Kavita considers Shabana Azmi as the best actress. Kavita has sung for the top actresses like Shabana Azmi, Sridevi, Madhuri Dixit, Manisha Koirala and Aishwarya Rai. Kavita is the wife of violinist L. Subramaniam. In an interview, she told that once she had to sing with singer Hariharan for Subramaniam, then she was not married.

"Kavita Krishnamurthy" is at the 19th Position in this list. 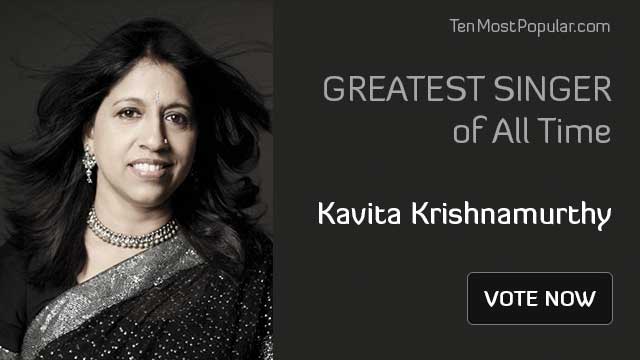