FacebookTwitterWhatsAppEmail
The name of Jagjit Singh (February 8, 1941 - October 10, 2011) is among the most popular ghazal singer. His music is sweet and his voice melts beautifully with music. His ghazals not only encompassed the understanding of the Shiro-Shayari among the less knowledgeable figures of Urdu but also introduced him to Shayars like Ghalib, Mir, Majaz, Josh and Firak. Jagjit Singh was honored with Padma Bhushan in the field of art by the Government of India in 2003. In February 2014, two postage stamps were released in Jagjit's honor and memory.

Like many, Jagjit's first love could not be reached. Recalling his days, he says, "I loved a girl. I was not interested in studies. In some classes, I spend two years". When asked, If I was not a singer, I would have been a Dhobi. It was a habit to see movies without the permission of the father and to enter the movie hall by bribing the gatekeeper.

In childhood, he inherited music from his father. Jagjit started learning classical music for two years with Pandit Chagan Lal Sharma in Ganganagar. He went further and learned the nuances of Khayal, Thumri and Dhrupad from the Ustad of Senia Gharana Jamal Khan Sahib. Father's wish was that his son would go to the Indian Administrative Service (IAS), but Jagjit had a tune of becoming a singer.

His interest in music during his studies at Kurukshetra University, Vice Chancellor Professor Suraj Bhan gave a lot of excitement to Jagjit Singh ji. He came to Mumbai in 1965. Here is a period of struggle. He used to stay as a paying guest and singing jingles for advertising or singing in the wedding ceremony etc. Jagjit had met Chitra ji in 1967. Two years later both of them got married in 1969.

"Jagjit Singh" is at the 25th Position in this list. 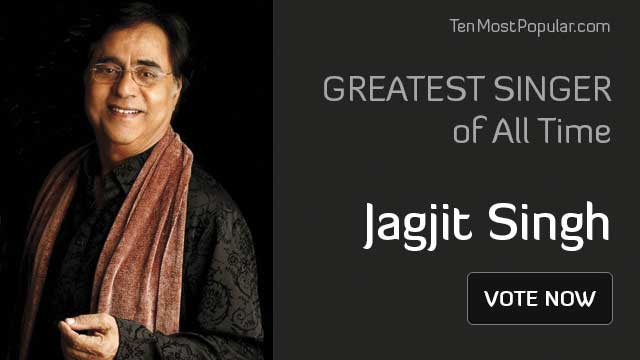