FacebookTwitterWhatsAppEmail
Asha Bhosle (born in Sangli, September 8, 1933) is an Indian female singer known as a playback singer in Bollywood films. Her career as a professional singer began at the age of 11 in 1943. Her first song was "Chala chala navabala" for Marathi films, Mazhe Bal sung with her younger brother and sister.

Asha Bhosle is a versatile singer. Besides singing film music, she also sang rhythmic pop songs, ghazals, bhajans, traditional Indian music, folk songs, qawwali, Rabindra Sangeet, and Nazrul Geeti. She has sung in almost all languages ​​in India, and also in English. In connection with her 60th birthday, Asha Bhosle published a book containing a list of songs she had recorded. All there are 10,700 songs in Hindi, but publishers cannot get the data of songs in other languages ​​that they have sung. In the interview, Bhosle herself claimed to have sung around 12,000 song titles.

Lata Mangeshkar, the older sister was recorded in the Guinness Book of World Records from 1974 to 1991 as a singer with the highest number of song recordings in the world. However, other sources doubted the Guinness Book record, and stated that Bhosle recorded more songs than Mangeshkar. Bhosle herself claims she has recorded more songs than any other singers in the world, a total of 12,000 songs.

"Asha Bhosle" is at the 10th Position in this list. 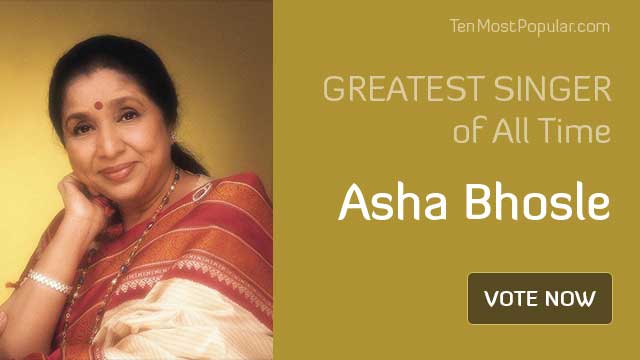