Ed Seminaro, an IBM researcher who participated in the University of Illinois program, pointed out that according to the "LINPACK" benchmark performance test of the Top 500 supercomputer, it can produce very good numbers, but the bandwidth (speed) between nodes is not high, because When doing this kind of test, there is almost no communication between the nodes, so the memory bandwidth may actually be poor. In contrast, it pointed out that Blue Waters' inter-node transfer rate can reach 192GB per second. This high performance is important for large companies such as Boeing, GM, and Ford, as well as government agencies. It is useful for various impact simulation experiments, as well as simulation operations such as weather forecasting and nuclear waste processing.

IBM announced the core frequency of the Power775 processor and the specific price of Blue Waters. The processor is packaged in a ceramic package with an interface of 5,336 pins. The chip runs at 3.84GHz and is between 3.5-4GHz announced by IBM. The Power775 consumes 800W, which is why it requires water cooling. The basic system Power775 price 560097 US dollars, which includes eight processors and each processor Power7 two 4GB memory. If the user wants to upgrade two 8GB of memory per processor, then an additional $2,690 is required, if you want to upgrade to two 16GB of memory per processor, you will need to pay an additional $5,199. If the user wants to achieve a maximum memory capacity of 2TB, the price will reach $332,736.

"Blue Waters" is at the 1st Position in this list. 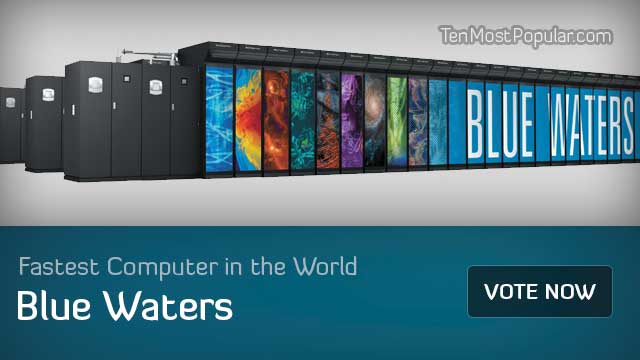