FacebookTwitterWhatsAppEmail
The Atlas computer was a supercomputer model designed jointly between the University of Manchester and the Ferranti and Plessey companies. When the first Atlas was put into operation at the University of Manchester in 1962, it was one of the first supercomputers, and the fastest until the release of the CDC 6600. At that time it was claimed that alone accounted for half the computing capacity of the entire United Kingdom. It was a second generation equipment that used transistors of germanium. Two other Atlas machines were manufactured, one for British Petroleum and the University of London, and one for the Atlas Informatics Laboratory in Chilton, near Oxford.

Ferranti designed a variant of the system for the University of Cambridge, called Titan or Atlas. This had a different memory organization, and used an operating system developed by the Cambridge Computer Lab, which allowed time-sharing.

The Atlas system of the University of Manchester was withdrawn in 1971. The last Atlas computer was in service until 1974. Parts of the Chilton Atlas are conserved in the National Museum of Scotland, in Edinburgh.

If the upper bit was set it was set to one, it was an Extracode and it was implemented as a special type of jump subroutine to a fixed address in the store (ROM), where that address was determined by the other nine bits. Extracode mode had its own program from the opposite direction.

Many of the extracodes were what today could be called microcodes, they were simple calculation procedures that would have been too inefficient to implement them in hardware, for example, sine, logarithm, square root. However, about half of the codes were designed as Supervisor functions, which invoked operating system procedures. Typical examples would be "Print the specified character in the specified stream" or "Read a block of 512 logical tape words N".

Extracodes were the only means by which a program could communicate with the Supervisor program.

One of the first high-level languages available in the Atlas was named AutoCode Atlas, which was contemporary to Algol60 and created specifically to address the shortcomings of that language that Tony Brooker perceived. However, the Atlas supported Algol 60, as well as Fortran and COBOL. Being a university machine, it was sponsored by a large number of the student population who even had access to a machine protection code for the development of the environment.

"Atlas" is at the 6th Position in this list. 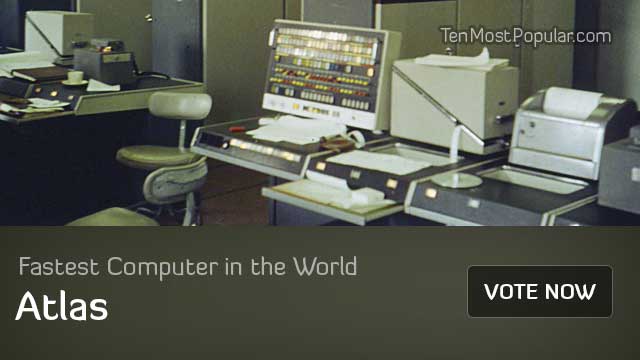