Windows NT is the collective name for the 32 and 64-bit versions of Windows - and Xbox - operating system from Microsoft. The letters NT stand for "New Technology", because the operating system, unlike the earlier Windows versions, is not based on MS-DOS.

The first name for Windows NT would have been given by Dave Cutler who used the initials "WNT" as a variant of VMS. However, the project was based on the OS/2 codebase, so it was often referred to as "NT OS/2" before it was named after Windows. One of the first NT developers, Mark Lucovsky, said the name came from the Intel i860 processor, which the system was originally aimed at. It bore the code name N10 ("N-Ten"). Several documents that were later released by Microsoft, such as a question and answer session with Bill Gates, suggested that NT stands for "New Technology", which was intended as a marketing term and had no underlying technical meaning.

Microsoft has stopped renaming Windows versions to their NT version number since Windows 2000, but it does mention "Built on NT technology". In later versions, the Windows number is not the same as the NT number, although it is done with Windows 10 (NT 10.0).

When Microsoft stopped developing OS/2, which was an operating system from IBM in collaboration with Microsoft, part of the code of the new OS/2 (version 3) had already been written. Microsoft and IBM initially agreed that IBM would develop OS/2 2.0, while Microsoft would develop OS/2 3.0. Microsoft used this code for a totally new operating system that was released in 1993: Windows NT. The first release of Windows NT was 3.1. Instead of starting with 1.0, Microsoft chose to use the same version number as the simultaneous Windows 3.1. Moreover, the GUI was also the same as that of Windows 3.x. The next version, Windows NT 3.5, was released in 1994 and a year later version 3.51 followed.

Windows NT 4.0 was introduced in 1996, the GUI of which was the same as that of Windows 95. In the years that followed, no new versions of Windows NT were released, but a number of updates, the so-called 'Service Packs'. In 2000 Windows 2000 came out, actually Windows NT 5.0. This version is also considered the first really stable Windows. Windows NT 5.1, better known as Windows XP (eXPerience), was released in 2001. With Windows XP the first version of Windows NT appeared that was also intended for home use. Windows Server 2003 followed in 2003, aka Windows NT 5.2. This version is actually the server edition of Windows XP, which, unlike earlier versions of Windows NT, did not have a server with the same name. Windows FLP was released in 2006. It is a limited edition that was only sold in America.

Windows NT 6.0 was released in 2007. The final name of this Windows NT was Windows Vista. Windows Vista has been available through a volume license since the end of 2006. Microsoft released Windows 7 on October 22, 2009. This version of Windows elaborated on its predecessor and brought various improvements. Windows 8 was released on October 26, 2012, introducing a completely new interface (Modern UI). Windows could now also run on ARM devices (including the Microsoft Surface). Windows 8.1, an update for Windows 8, was released in 2013.

A more comprehensive overview of the Windows NT versions and properties can be found under the Microsoft Windows article.

When development began in November 1993, Windows NT (using protected mode) was developed along with OS/2 3.0, the third version of the operating system jointly developed between Microsoft and IBM. In addition to the work of the three versions of OS/2, Microsoft continued to develop in parallel a Windows environment based on DOS and with less demand for resources (using real mode). When Windows 3.0 was released in May 1990, it was so successful that Microsoft decided to change the API for the not yet released NT OS/2 (as it was known) from an OS/2 API to an extended Windows API. This decision caused tension between Microsoft and IBM, and the collaboration fell apart. IBM continued the development of OS/2 on its own, while Microsoft continued to work on the newly named Windows NT.

Microsoft hired a group of Digital Equipment Corporation developers led by Dave Cutler to develop Windows NT, and many elements that reflect DEC's experience with VMS and RSX-11. The OS was designed to run on multiple architectures, with the core separated from the hardware by a layer of hardware abstraction. APIs were implemented as subsystems above the undocumented native API. This allowed the future adoption of the Windows API. Originally a micronucleus. It was designed, subsequent releases have integrated more features to improve core performance. Windows NT was the first operating system to use Unicode internally.

When Windows NT was designed, it looked at certain points that Microsoft had not yet reached, such as portability and stability. For example, Windows NT was equipped with three subsystems (Win32, OS/2, POSIX) with the possibility to run programs from OS/2, Xenix and MS-DOS. For the transferability was kernel written in C. Good thought was also given to modern I/O technology and Virtual Memory capabilities.

NT also introduced a new NTFS file system as a replacement for the FAT system that had been used in Windows up to then. This file system is based on OS/2 from IBM.

Around Windows Vista (NT 6.0) changes were made such as a new driver model (WDDM) and 64bit support for kernel and runtime. With Windows 8 a new API was written, called WinRT.

The user mode consists of subsystems that can pass I/O requests to the appropriate controllers in the core mode through the I/O manager (which is in core mode). Two subsystems form the Windows 2000 user mode layer: the Environment subsystem and the Integral subsystem.

The Win32 environment subsystem can run 32-bit Windows applications. It contains the console in addition to support for text windows, shutdown and handling of serious errors for all other environment subsystems. It also supports Virtual DOS Machines (in English, Virtual DOS Machine, VDM), which allows you to run MS-DOS applications and 16-bit Windows 3.x applications (Win16) on Windows. There is a specific VDM that runs in its own memory space and emulates an Intel 80486 running MS-DOS 5. Win16 programs, however, run on a Win16 VDM.

Each program, by default, runs in the same process, so it uses the same address space, and the Win16 VDM provides each program with its own thread of execution to run. However, Windows 2000 allows users to run Win16 programs on a separate Win16 VDM, which allows the program to be a priority multitasking when Windows 2000 runs the entire VDM process, which contains only one running application. The OS/2 environment subsystem supports 16-bit character-based applications and emulates OS/2 1.x, but does not allow 32-bit or graphical applications to run as in OS/2 2.x and later. The POSIX environment subsystem only supports applications that strictly comply with the POSIX.1 standard or the standards of Associated ISO/IEC.

The integral subsystem is responsible for specific functions of the operating system on behalf of the environment subsystem. It consists of a security subsystem, a terminal service and a server service. The security subsystem deals with security receipts, allows or denies access to user accounts based on resource permissions, manages log on requests and initiates authentication, and determines which system resources need to be audited for Windows 2000. It also handles the Active Directory. The terminal service is an API to the network redirector, which provides access to the network to lscomputer. The server service is an API that allows the computer to provide network services.

A number of early developers came from the team that had worked on their VMS operating system for Digital Equipment Corporation. Some aspects of VMS are still somewhat recognizable in Windows NT. It was therefore joked that the abbreviation WNT per letter was just one further in the alphabet than VMS.

"Windows NT" is at the 24th Position in this list. 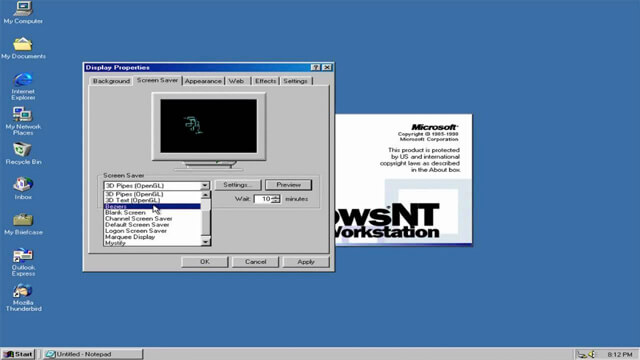