Windows 8 is an operating system developed by Microsoft for use on computers, laptops and tablets and is the successor to Windows 7. The RTM version was released on August 1, 2012 and the final consumer version has been available since October 26, 2012. TechNet and MSDN users (or another type of account with the option to obtain a license from Windows 8) were able to use the operating system from August 15, 2012. Windows Server 2012 was released at about the same time as Windows 8. Windows 8 was succeeded by Windows 8.1 on October 17, 2013. Windows 8.1 is available for free in the Windows Store for anyone with Windows 8.

According to the 'Windows Design Team', the difference between Windows 7 and Windows 8 is that Windows 8 can handle the chipset much more efficiently, making the system faster. Windows 7, on the other hand, was more focused on improving the classic Windows experience.

Windows 8 has a completely new user interface, Modern UI (codenamed Metro). This interface is also applied to the Windows Phone, Xbox, Office 2013 and Zune. The new interface is designed to be better suited for touch screens, but also to work well with mouse and keyboard. A version of Windows 8, called Windows RT, has been specifically developed for tablets and Microsoft's own Surface RT tablet and offers support for ARM processors.

The development of Windows 8 started before Windows 7 was available in 2009. In January 2011, at the Consumer Electronics Show (CES), Microsoft announced that Windows 8 will support ARM processors, along with support for microprocessors from Intel, AMD and VIA, who have been around for some time. On June 1, 2011, Microsoft officially announced Windows 8, and already showed some of the all-new interface, along with some other new features at the Taipei Computex 2011 in Taipei (Taiwan). Later the D9 converence in California (United States) by Julie Larson and Microsoft Windows president Steven Sinofsky.

Just before the BUILD conference from Microsoft started, Microsoft opened a new blog called "Building Windows 8" for users and developers on August 15, 2011.

On February 16, 2012, Microsoft announced that the expiration date of the Developer Preview was delayed. Normally this was on March 11, 2012, but this was postponed to January 15, 2013. The user had to activate this new expiration date himself.

At the Japan's Developer Day conference, Steven Sinofsky announced the Windows 8 Release Preview (build 8400). It would be available in the first week of June, but was already downloadable on May 31, 2012. On May 28, 2012, the Release Preview already landed on various BitTorrent websites, but this was only the Chinese x64 version.

The biggest changes in the Windows 8 Release Preview are the support for Flash in the Metro version of Internet Explorer 10, three new standard apps: Sport, Travel and News. Unlike the Developer Preview and the Consumer Preview, the Release Preview expires on January 16, 2013, a day later than the two previously mentioned versions.

Windows 8 reached the RTM (Release To Manufacturing) milestone on August 1, 2012. This version contains new wallpapers, both for the home screen, the lock screen and for the desktop. Small adjustments have also been made to the Modern UI. The term Metro has also been deleted and replaced by Modern UI. The build number is 9200. On October 26, 2012, Windows 8 must be available in stores. The Windows 8 RTM became available on 15 August 2012 for developers via the MSDN site and on 16 August 2012 for companies via Microsoft Software Assurance.

The Windows 8.1 update was officially announced at the end of May 2013. With the announcement, various improvements were revealed. Later Microsoft also published a video clip showing new functionality. Windows 8.1 will be a free update for Windows 8 users.

The Windows 8.1 Milestone Preview was released on June 26, 2013 and will be distributed through the Windows Store. Anyone with Windows 8 will be able to use and test this preview for free. New features include an improved home screen, new apps, and Internet Explorer 11 beta. The Milestone Preview would also bring improved support for portrait mode and smaller screens. Furthermore, various personalization options have been added and the start button is also making its appearance.

Microsoft officially announced Windows 8.1 Update 1 on Build 2014. Among other things, the update includes updated "Apps" views. Internet Explorer 11 has also received an update with improved support for WebGL, ECMAScript and new developer tools. The home screen now shows a search and on/off button and context menus are now mouse friendly. Users without a touch screen will now also be able to boot to the desktop as standard, Internet Explorer Touch has the option of displaying the tabs and address bar as standard and all standard programs are also set to desktop apps. It also becomes possible to open Windows apps in the taskbar, and these apps contain a title bar. The Windows Store would also receive a visual update after the launch of Update 1.

The most notable change from Windows 8 compared to earlier versions is the user interface, including the home screen that consists of tiles that applications introduce. This start screen appears when Windows 8 starts up (the desktop is no longer visible). The way to get to the desktop is that one of these tiles displays the desktop in small format and when one clicks on it, the desktop appears in its familiar form (however, by default without a start button, unlike Windows 7). The tiles continuously update to display relevant information and they can be organized somewhat by the user. Microsoft has mainly focused on making a simple home screen and therefore the options are limited. This is necessary, among other things, to make Windows 8 suitable for use with a touchscreen. The interactive elements are large, the number of options and settings is limited to the absolutely functional and the tiles are flat and brightly colored to keep the home screen visually organized. Each tile displays an application (app), link to a site, or Windows program that can be started by clicking on the tile.

If one clicks on a tile, the app or program is brought out and any items under the tile are then displayed extensively. Some tiles form a kind of pre-installed websites, such as weather or stock prices.

The desktop is therefore somewhat more in the background and actually serves more if one starts to use the computer for the more traditional purposes that one could also execute in Windows. To have a quick look at Windows 8, the entire desktop no longer needs to be used.

In addition to an installation via optical disc or ISO format, it will also be possible in Windows 8 to install the system via the internet. According to Microsoft, this way should go faster and the total size of the installation should be smaller. The upgrade of an old Windows version has also been adjusted: in addition to a complete reinstallation or full upgrade with all files, it will also be possible to transfer only personal files.

Windows RT, a version of Windows 8 made for the ARM instruction set, only supports programs that are built into Windows by default, are included with Windows Update, or are downloaded from the Windows Store. Microsoft Office 2013 RT is also included with Windows RT. Windows RT does not support running, emulating, or porting existing x86/64 desktop programs on the ARM architecture.

Metro-style applications can be used on both Windows 8 and Windows RT, it is also possible that they only support a certain architecture.

Microsoft has said goodbye to the old logo with the colors red, green, yellow and blue. It has been exchanged for a new logo in one color (the default is light blue) that symbolizes the relationship with the tiles in the Modern UI. According to Microsoft, the logo was not really redesigned, but rather returned to its original meaning. The user can change the color of the logo by choosing a different color theme.

There is also a server version of Windows 8 called Windows Server 2012.

Windows 8 was very mixed. Among other things, there was extensive criticism of the new Metro screen and the lack of the familiar start button and the start menu.

Several game developers commented on the closedness of the Windows Store. Gabe Newell from Valve described Windows 8 as "a catastrophe". To reinforce their position on Windows 8, Valve launched "Steam on Linux". In addition, among others, Rob Pardo from Activision Blizzard and Markus Persson (the developer of the popular game Minecraft) expressed their dissatisfaction with the Windows Store. 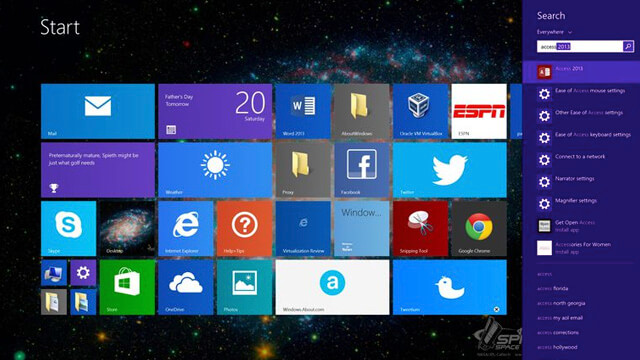