Windows 10 is an operating system for personal computers developed and released by Microsoft as part of the operating system family Windows NT. It was released on July 29, 2015. It is the first version of Windows for which feature updates are constantly being released. Devices in enterprise environments can receive these updates at a slower pace or only receive critical updates, such as security patches, during the ten-year lifetime of extended support.

Windows 10 introduces what Microsoft describes as "universal apps", as an extension to metro style apps. These apps can be designed to work on different Microsoft product families (including PCs, tablets, smartphones, embedded systems, Xbox One, Surface Hub and Mixed Reality) with almost identical code. The Windows user environment has been revised to be optimized for both mouse and touch screens based on available input devices, especially on 2-in-1 PCs's. Both environments contain an updated start menu in which elements of the traditional start menu of Windows 7 are interwoven with the tiles of Windows 8. The first release of Windows 10 also introduces a virtual desktop system, a window and desktop management function called Task View, the Microsoft Edge web browser, support for fingerprint recognition and face recognition, new security features for corporate environments and DirectX 12 and WDDM 2.0 to improve the graphics capabilities of the operating system for games.

Windows Threshold was officially announced on September 30, 2014 as Windows 10. Terry Myerson said that the next iteration of Windows is a threshold for Windows and it would therefore not be appropriate to simply call it "Windows 9". He also joked about the name "Windows One", but that it could not be used because of Windows 1.0. Windows 10 was announced as a logical sequel to both Windows 7 and Windows 8 with focus on both mouse and keyboard as well as touch.

Skipping Windows 9 happened for ideological and technical reasons. A lot of old software uses the name of the Windows version to check whether it works or not. However, software that searches for "windows 9" does not expect Windows 9, but Windows 95 or Windows 98. This led to compatibility issues in early tests with Windows 9. In addition, Windows 9 does not belong to the Win9x series, but belongs to the Windows NT series. That is why Microsoft decided to give Windows 10 as the version name and as the system name NT 10.0.

The Windows 10 Insider Preview is the 3rd milestone in the development of Windows 10. Build 10074 is the first build to be named. The build contained a few updates to the start menu and the general interface. The search bar was given an improved interface and Cortana was integrated with the start menu. It is now also possible to make the tiles static again. The Settings app has also been expanded and various settings have been removed from the Control Panel. The old sounds were also replaced by new ones.

Microsoft announced build 10074 with the new name on Microsoft Build 2015, but also showed a build that includes further adjustments to the start menu and includes various improvements to the tablet mode and further adjustments to the interface and apps that come with Windows 10 On May 20, 2015, Microsoft announced it would distribute build 10122 with "different enhancements." The build was made available to Windows Insiders the same day. Build 10122 brought an improved tablet start menu. Cortana was also taken care of. In addition, various apps were changed, removed and added. Finally Microsoft Edge an update with various new features. On May 29, 2015, build 10130 was rolled out to Windows Insiders, with further minor changes to the start menu and bug fixes, among others. A month later, on June 29, build 10158 was rolled out with more stability to Windows Insiders and a day later, build 10159 was also announced. Build 10162 was offered from 2 July and build 10166 on 9 July 2015.

On November 5, Microsoft rolled out build 10586 to Windows Insiders. This build only contained quality improvements. The build was later rolled out to Windows Insiders in the Slow Ring on November 9, 2015 and finally on November 12, 2015, the rollout of the first major update for Windows 10 to the Current Branch began. This update has been made available for Windows 10 users and users of Windows 7, 8 and 8.1 can install the update as part of the Windows 10 upgrade.

Various apps have been updated to more recent versions in early Technical Preview builds. In later builds, apps were provided with the design language of Windows 10, for which some apps were repeatedly given a new design. Various new functions were also added to all apps. Messages and Calendar were replaced by an Outlook app and the OneNote app was given a completely new interface similar to the Office for Windows apps. The PC Settings app was renamed to Settings and was given a new design and a large amount of new settings that had to be adjusted earlier in the Control Panel.

Microsoft also added some new apps to Windows 10, including the Xbox app. This should make it possible to stream games from an Xbox One to a Windows PC. Microsoft also added a support app. Furthermore, two apps for Windows Insiders were added and several apps were made that are part of Cortana in more recent previews. In addition, some apps were removed or deleted from the list of apps that were pre-installed, such as Windows Reading List and Windows Reader. These apps were replaced by Microsoft Edge.

Cortana is a function to use and process internet information. Cortana already worked on some Windows 8.1 smartphones, but will become a standard feature on all new Windows 10 versions. It combines elements of a search engine with those of a personal assistant, because it can keep track of what a user is looking for, what his interests are and what a user is probably looking for. In regions where Cortana has been implemented (not yet in the Netherlands and Belgium) it can be used to monitor surfing behavior and thus provide the user with relevant information. Cortana also responds to speech-driven questions and assignments, and an e-mail can be dictated and sent via Cortana. 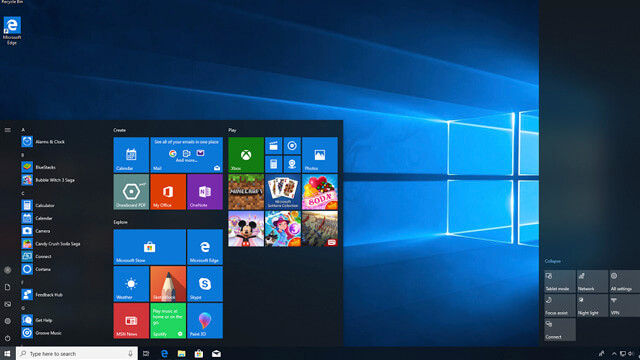 Total Votes: 11148
Votes received:152
Up votes:137
Down votes:15
1.29% Popularity
90% Up votes
10% Down votes
Go to voting page
Comments on Windows 10
Submit
Cancel
4 Comments
No longer fit for purpose as updates disrupt the system and can take hours to implement
0
0
Reply
Crap, a mixture of old and new operating systems. What a mess! Two applications to do the same thing, almost all the time.
0
0
Reply
this os is the best
0
2
Reply
A little better than windoze 7 and 8, but still sux compared to linux.
0
2
Reply