System 7 is a version of Mac OS, the operating system of Macintosh personal computers introduced on May 13, 1991, and was the main operating system of the Mac until it was replaced by Mac OS 8 in 1997. Features added to System 7 included Cooperative Multitasking, virtual memory, personal file sharing, QuickTime, QuickDraw 3D and an improved graphical interface. Nowadays it is still used by a small number of Macintosh users that use computers based on Motorola 68000 family microprocessors.

Note that "System 7" is used as a generic term to refer to all its versions. With the release of version 7.6 in 1997, Apple officially changed the name of the operating system to Mac OS, a name that first appeared in System 7.5.1. System 7 was developed for Motorola 68k processors but was ported to PowerPC, when Apple adopted the use of the new processor.

Shortly before the release of System 6 in March 1988, the Cupertinos held a visiting meeting to discuss plans for the further development of the "apple" OS. The tasks were written on cards: those that seemed fairly simple to implement in the short term (such as adding color to the user interface) were written on blue cards, and long-term goals (like full multitasking) were written on pink cards, and the most difficult ones (as an object-oriented file system) on red. The implementation of the tasks outlined in blue and pink cards was supposed to take place simultaneously on the first two projects code-named "Pink" and "Blue", respectively (including the project "Taligent ru en"). Through the efforts of the "blue" team, who called themselves "Blue Meanies" in honor of the characters of the cartoon "Yellow Submarine", Apple intended to release an updated version of the existing OS for "Macs" in 1990—1991, and the team of "pink" was to develop a completely new OS by about 1993.

By the beginning of the 1990s, it became obvious that the Motorola 68k processors were obsolete, and the Macs needed a switch to a fundamentally new architecture. ARM seemed an interesting solution, but at that time the processor performance on this architecture was low. Processors from Intel were quite expensive. Ultimately, in 1991, the AIM alliance was formed, which included Apple, IBM and Motorola, which resulted in the emergence of PowerPC micro architecture. System 7 began to support PowerPC, starting with version 7.1.2. Due to the lack of software, the built-in 68k emulator loaded without starting FPU and PMMU when starting the OS, thus the ability to install A/UX has been closed. To simplify the development of new software for PowerPC, a special nanocore was written - smaller in size than the microkernel used. It was launched with the highest priority, acted as a layer of hardware abstractions and provided low-level interfaces for handling interrupts, exceptions, and memory management. Only OS system services and the debugger could access it directly.

It is worth noting that the first versions of the classic Mac OS for PowerPC contained quite a bit of platform-specific code. Most of the applications, drivers that existed at that time, and most of the Toolbox and the OS code itself were run in emulation mode only. It was assumed that a nanonuclear architecture would help to simplify porting and software development for PowerPC. Similarly, Apple made the switch from PowerPC to Intel processors in 2006.

System 7 was the first version of Mac OS that required a hard drive because of the large size of installed files that did not fit on a 1.44 MB floppy disk.

Later versions of System 7, specifically System 7.5 and 7.6, come with a directory of utilities that brought extras such as AppleScript, Disk Copy, QuickDraw GX Extras and QuickTime Movie Player, in addition to other applications that could be installed later, manually.

System 7.0 and 7.1 offered a utility called Apple File Exchange, which provided access to diskettes in MS-DOS and Apple II format. System 7 Pro, System 7.5 and later came with PC Exchange, previously a separate product, which allowed the system to mount floppy disks formatted in DOS and Windows on the desktop in the same way as Macintosh format disks.

Third-party software such as SoftPC allows compatibility with MS-DOS and Microsoft Windows programs, while others such as Connectix Virtual PC (today Microsoft Virtual PC) allow the Mac to run Windows and earlier versions of Mac OS through emulation. Others approach the issue via hardware using expansion cards with an Intel x86 processor and its own memory (the rest is mapped to Mac resources). Apple launches a series of devices with the last name DOS Compatible that bring one of these cards as standard (with an Intel 80486 or an Intel Pentium).

After System 7 was released, 7.0.1 was a minor re-release given in October 1991. A patch called "System 7 Tune-Up" followed the previous one, and minor updates followed throughout its life.

Although there were several updates that were added, due to the long period that System 7 had life. Most of the changes were improvements, to the existing software. At that time they did not focus much on security but on the stability of applications. 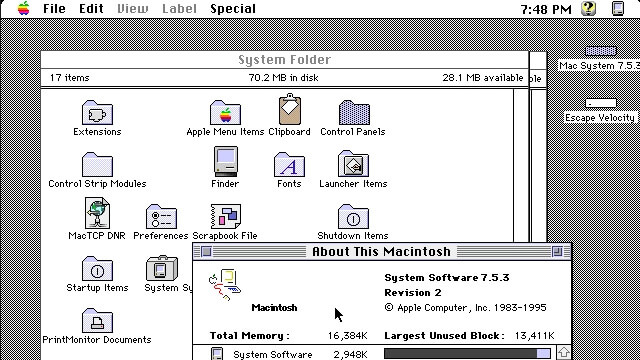