SunOS was the version of the operating system derived from UNIX and BSD developed by Sun Microsystems for its workstations and servers until the beginning of the 1990s. This was based on the UNIX BSD with some additions of the System V UNIX in later versions.

SunOS is a version of UNIX used in Sun Microsystems workstations which was released in 1982. After releasing SunOS version 4, Sun Microsystems changed the UNIX BSD code they had previously used with the UNIX System V code, after obtaining a license from the UNIX licensee at that time, AT&T. This change made the name change to Solaris version 2, from what SunOS should have been 5. So, indirectly, SunOS was considered as Solaris version 1.x.

SunOS 1.0 was basically based on BSD 4.1 and was published in 1982. SunOS 2.0, which came out in 1985, used BSD 4.2 as a base and introduced a virtual file system (VFS) layer and the NFS protocol. SunOS 3.0 coincided with the launch of the Sun-3 series in 1986 and incorporated several utilities of System V. SunOS 4.0, which came out in 1989, migrated to the base of BSD 4.3, introduced a new virtual memory system, dynamic linking and a System V STREAMS I/O architecture implementation.

SunOS 5.0 and later versions are based on UNIX System V Release 4, and have been known under the trade name of "Solaris". Even in 2010, the core of Solaris 10 and OpenSolaris systems (the free version) internally retains the name "SunOS 5.10" and Solaris 5.11, respectively.

In the early 1990s Sun replaced the SunD 4 BSD derivative with a version of UNIX System V Release 4, which they called Solaris 2. SunOS 4 was then retroactively called "Solaris 1" in the Sun marketing format.

GUI environments from the earliest versions of SunOS included SunTools (later SunView) and NeWS. In 1989, Sun released OpenWindows an X11- based environment that also supported SunView and NeWS applications. This became the default SunOS GUI in Solaris & 1.0 (SunOS 4.1.1). Solaris 2.5 introduced the CDE desktop.

Confusingly, the core of the Solaris operating system (Solaris 2 onwards) is identified as SunOS 5.x despite its very different origins compared to previous versions of SunOS.

The minor version of SunOS 5 included in the Solaris versions corresponds to the minor (up to Solaris 2.6) or greater (Solaris 7 onwards) Solaris version number. For example, Solaris 2.4 incorporated SunOS 5.4 and the latest version of Solaris, Solaris 10, runs with SunOS 5.10. For its part, OpenSolaris is SunOS 5.11 (future Solaris 11). Solaris man pages are tagged with SunOS, and the boot sequence shows it on the screen, as well as the kernel version, but the term "SunOS" is no longer used in Sun marketing documents.

In 1987, AT&T and Sun announced a collaboration on a project to merge the most popular UNIX variants at that time: BSD, System V, and Xenix. The result was to be System V Release 4 (SVR4).

September 4, 1991 Sun announced the transfer of its operating system with the BSD code base to the SVR4 code base. Although inside the Sun the system was called SunOS 5, it was marketed under the Solaris brand.

It was supposed to release a new operating system next year, however, Sun immediately began to apply the name Solaris to the existing SunOS 4 (including OpenWindows). Thus, SunOS 4.1.1 became known as Solaris 1.0, SunOS 5.0 has become part of Solaris 2.0. SunOS 4.1.x releases were released before 1994, each of them had the equivalent name Solaris 1.x.

"SunOS from Sun Microsystems (became Solaris)" is at the 14th Position in this list. 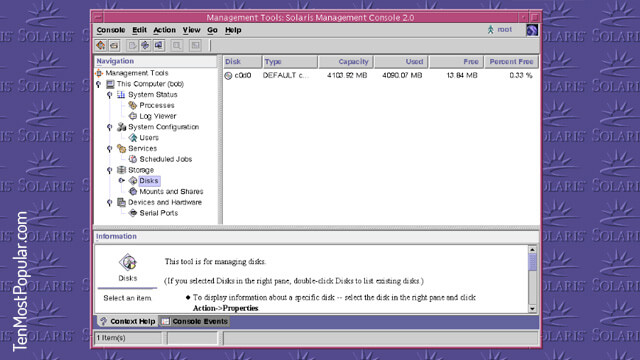