MS-DOS was born in 1980. When tasked with Microsoft to produce an operating system for personal computers range of IBM PC of IBM. At this time, Microsoft bought the rights to QDOS, also known as 86-DOS, of Seattle Computer Products that was developed by Tim Paterson, and began working on the modifications to meet IBM's requirements.

When IBM developed its IBM PC, they initially had their own operating system in mind. The BASIC - interpreter would by Microsoft of Bill Gates delivered.

However, when the company's own operating system did not run smoothly, IBM turned to Microsoft. A deal was concluded that Microsoft would write an operating system. Bill Gates decided not to start it himself, but went looking for a suitable product at other companies.

The operating system he found was QDOS (a Quick and Dirty Operating System derived from CP/M, hence the 'D'), which Microsoft bought for the sum of $50,000 and then further developed it himself. Microsoft adapted the system according to the wishes of IBM, that it sold under the name PC-DOS.

However, the contract with IBM stated that Microsoft could also sell DOS independently to third parties. Microsoft did this under the name MS-DOS. When PC clones appeared on the market in addition to the IBM PC, MS-DOS quickly became popular and Microsoft began its advance in the computer world.

MS-DOS was developed from QDOS, Quick and Dirty Operating System, also known as 86-DOS. Its development officially began in 1981 and was launched in 1982 as MS-DOS 1.0. It had nine major versions and reached wide dissemination, but was gradually replaced by operating systems that offered a graphical user interface (GUI), in particular, by several generations of the Microsoft Windows operating system.

The development of MS-DOS as an independent operating system has been discontinued. The last standalone version was 6.22. From version 7.0, MS-DOS is no longer a separate operating system, but directly integrated into Windows. MS-DOS was still fairly visible in Windows 95 and 98, but in Windows Me most traces were erased. A Chinese MS-DOS fan (Wengier) has made an independent version of the most extensive version. This is MS-DOS 7.1, introduced by Microsoft with Windows 95 OSR2, this was for everyone to download for free, but at the moment this is no longer possible.

Windows 95, Windows 98 and Windows Me as well as the versions for that use MS-DOS to start, after which the graphic shell takes over. MS-DOS is not a multitasking operating system, which means that only one program can work at a time. By using virtual processors (in practice the V86 mode of the 80386 processor and higher), however, it is possible to run different MS-DOS programs each in their own virtual computer. However, this method can be problematic because many MS-DOS programs want to directly control the hardware. An advanced operating system can allow this, but at the expense of stability (setting the hardware incorrectly can cause the computer to crash), or virtualizing the hardware, whereby the operating system monitors what the MS-DOS program has with the hardware is doing.

In version 2.0, launched in 1983, Unix's own features were introduced, such as the use of subdirectories, pipelines, redirection of incoming and outgoing orders, as well as support for hard drives and floppy disk drives of 360 KiB capacity.

Here are some of the commands used by MS-DOS, which can currently be used from the command line in Windows operating systems. To access the help of these, MS-DOS, from version 6.2 allows the following: command_to_consultation /? (Ex.: copy /?). They can be internal (included within COMMAND.COM itself) or external (executable files in the MSDOS directory).

Internal or resident commands are those that are transferred to memory at the time of loading the Operating System and can be executed without having the DOS present in the default unit from which the command can be executed. The default unit is the unit it is in, for example A:\>_; and the specified unit is the one to which we address or specify being in another unit, for example A:\> B:, the specified unit is B.

Here are some of the commands that MS-DOS used, and that can currently be used from the command line in Windows operating systems. To access the help of these, MS-DOS, from version 6.2 allows the following: command_to_consultation /? (Ex.: copy /?). They can be internal (included within COMMAND.COM itself) or external (executable files in the MSDOS directory):

You can use these combined parameters. 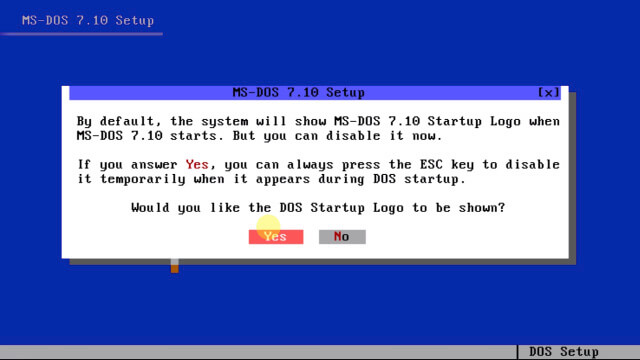