MacOS (formerly Mac OS X and later OS X) is a line of operating systems from Apple and has been included on all new Apple Macintosh systems since 2002. It is the successor to Mac OS 9, the last "Classic" Mac OS Apple used since 1984. In 2016, this operating system was renamed from OS X to macOS.

For Apple server systems became OS X Server made. The base of this system is identical to the consumer version, but it included specific tools for servers. The iOS mobile operating system is a modified version of macOS and is used for the iPhone, iPad, and iPod touch.

The Mac OS was initially programmed with the idea that a computer would mainly use one program at a time. Supporting advanced multitasking, or the ability to run multiple programs independently of each other on the same computer, turned out to be very difficult to add to the system. Macintosh computers lost a lot of following due to the lack of this capability, which was already realized on many other systems.

Over time, more obsolete elements of the Macintosh operating system came to light. It became increasingly clear that it would be easier to design a completely new system than to solve all problems from the existing system. Initially, only a server version was released in 1999 on a limited scale. This version includes workgroup management tools and simplified access to network services, such as mail, Samba and DNS servers. In March 2001, a consumer version of Mac OS X was also released without these services. It is largely based on NeXTStep, the operating system for NeXT Computers, which in turn is based on a BSD core.

However, the old Mac OS could still be used in emulation, Classic named. Starting with the Intel Mac systems, the Classic environment was removed from the operating system and a transparent PowerPC emulation system called Rosetta was added. This allowed older programs written for the PowerPC processor to work on a Mac with Intel processor, making for an easier transition to the new systems. Starting with OS X 10.7 ("Lion"), Rosetta is no longer included.

Mac OS X consists of two parts: XNU (a microkernel design based on the Mach 3.0 microkernel and the 4.4 BSD system service) and Aqua, a graphical user interface developed by Apple.

A variant of OS X called iOS is used by Apple in its iPhone, iPad and iPod touch products. Since these products do not use an Intel or PowerPC processor, this means that a modified version of OS X has been developed for ARM processors.

Mac OS X is the successor to Mac OS 9. The character "X" in the name refers to the Roman numeral ten. However, some people read the sign as the letter 'x'. This is facilitated by the fact that many Unix-related systems have names that end with an 'x', for example AIX, IRIX, Linux, Minix, Ultrix and Xenix. In addition, the graphical Unix interface is called the X Window System. Another reason is Apple's tendency to refer to specific versions with decimal notation, for example with Mac OS X 10.4.

Former versions of Mac OS X are named after big cats and have been advertised and sold under this name since version 10.2 (Jaguar). For example, Mac OS X version 10.6 is commonly referred to as Snow Leopard by Apple and Mac users, and version 10.7 Lion. As of version 10.8, "Mac" has disappeared from the name, and the operating system continues under the name "OS X". Starting with OS X 10.9, Apple uses locations in California for naming.

As of version 10.12, the name has been changed from OS X to macOS, to better align with iOS, tvOS and watchOS.

In March 2001, Apple launched the first version of Mac OS X called Cheetah. The initial version was slow, incomplete and had very few applications at the time of launch. While many critics suggested that the operating system was not yet ready for use by the general public, they recognized the importance of the launch as a basis for improvement. The Macintosh community already saw the launch as a huge fulfillment, as efforts to completely overhaul the Macintosh operating system had been going on since 1996 and were delayed by endless problems.

Later that year, in September 2001, Mac OS X version 10.1 was released. The release was characterized by increased performance and additional applications, such as the ability to play DVDs. Apple launched the 10.1 as a free upgrade CD for 10.0 users and as a paid version for users of Mac OS 9. It was soon discovered that the upgrade CDs could also be used as full installation CDs by modifying a particular file. The upgrade CD was later reissued in a reduced version that prevented installation on Mac OS 9. On January 7, 2002, Apple announced that Mac OS X would become the default operating system for all Apple computers by the end of that month.

On August 24, 2002, OS X version 10.2, or Jaguar, was launched. It was the first version to introduce a "family pack". This family pack allowed a user to install Mac OS X on up to 5 different computers.

On October 24, 2003, OS X version 10.3, or Panther, was launched, which contained 150 new technologies and programs compared to the previous version.

In April 2005 OS X version 10.4 aka Tiger was launched. This version included innovations in the field of search with the Spotlight program and facilitated regularly recurring actions with Automator. In addition, the user could display a number of widgets on the screen with Dashboard, with which the weather, world times, stock prices and flight information can be seen at a glance. Furthermore, since version 10.3 Exposé included, a tool with which you can see all open windows simultaneously reduced in size with one press of one key - previously F9, on new Macs F3, on F10, all open windows in the current program are minimized and with F11 you can see the desktop.

October 26, 2007 Mac OS X 'Leopard' 10.5 was released as the successor to 'Tiger'. In addition to added functions such as Time Machine, for making backups, Quick Look and Cover Flow for faster display of file information, Boot Camp is one of the standard features. The latter program makes it possible to run on Macs with Intel processors in addition to Mac OS X also Microsofts Windows (usually for running computer games or programs not available for OS X). Via alternative 'virtualization' packages such as VMWare and Parallels it is also possible to run many Windows programs directly within OS X, without having to restart in Windows via Boot Camp.

Mac OS X Snow Leopard (10.6) was released on August 28, 2009. This system aimed to improve existing functions instead of adding more functions. The main advantages of this system are that it takes up less space than Leopard-7 GB according to Apple, an improved interface for Exposé, faster backups, faster shutdowns and faster wake-up times from sleep mode. Much of the space saved is due to "cleaning up" the system. For example, support for PowerPC processors and AppleTalk has been dropped, and design files incorrectly included in the program files in Leopard have been removed. System processes and almost all applications included with Snow Leopard have been converted to 64 bit and the Finder has been completely reprogrammed in the Cocoa programming language.

Mac OS X 10.7, called Lion, was announced by Steve Jobs in October 2010 during the media spectacle 'Back to the Mac'. This new version of Mac OS X was released on July 20, 2011. Lion contains more than 250 new additions. Many changes and additions are based on the way iOS works.

OS X 10.8, dubbed Mountain Lion, was announced on February 16, 2012 through Apple's website and has been available for download from the Mac App Store since July 25, 2012. The operating system contains many new functions that originate from iOS, Apple's operating system for mobile devices. OS X is referred to as "Mac" without the prefix from this version onwards.

OS X 10.9, called Mavericks, was announced on June 10, 2013 through Apple's website. Apple is discontinuing feline animal names and promises to use names that refer to Apple's roots for the next decade: California. There are about 200 new functions. Mavericks has been available for free download from the Mac App Store since October 22, 2013.

OS X 10.10, called Yosemite, is the successor to OS X Mavericks. The name, as well as the revamped graphical user interface, was unveiled at the annual WWDC in June 2014. Yosemite has been available as a free download from the Mac App Store since October 17, 2014.

OS X 10.11, called El Capitan, is the successor to OS X Yosemite. With this new version of OS X, the focus is mainly on performance and user-friendliness. El Capitan was unveiled at the annual WWDC on June 8, 2015 and has been available as a free download from the Mac App Store since September 30, 2015.

MacOS 10.12, called Sierra, is the successor to OS X El Capitan. The operating system will be renamed to better align with iOS, tvOS and watchOS. Apple has also brought Siri to the Mac with this update.

MacOS 10.13, called High Sierra, is the successor to macOS Sierra. One of the biggest changes in High Sierra is the switch from the HFS + file system to APFS. In addition, this update provides support for VR game development, external GPUs (Metal 2), and HEVC video encoding. Changes have also been made to Safari, Photos and Mail. Safari has a new "Intelligent Tracking Prevention" mode to stop trackers. Photos has new editing tools and an updated sidebar. Mail is faster and uses up to 35% less storage.

"Mac OS X from Apple Inc." is at the 9th Position in this list. 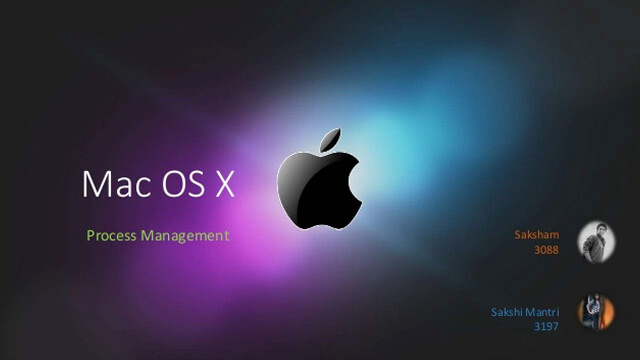