It was a mono user and mono task operating system, where communication with the user was similar to that of a terminal. Its user interface is in some ways similar to that of CP/M, even from the point of view of the program interface. ISIS-II was distributed as part of Intel's Microprocessor Development System.

To open files, the program sends the name of the file and a handler is returned. Each device has a name, which is entered between a pair of two points (F0 and F1 for floppy drives, LP for printer, etc.). Each diskette has a single directory with no possibility of subdirectories.

At the level of user commands, the system includes:

From a program there was access to a series of procedures that could be used to carry out certain specific operations of the system, facilitate programming and manage external devices in a unified manner. These included:

The programs and data of the ISIS-II operating system were not compatible with the format of the most extended CP/M operating system, but the differences were not large and there were methods and simple application programs that made the corresponding conversions.

ISIS-II needed at least 32 kilobytes of RAM, half the maximum address space for the 8080/8085 CPU that was 64 kilobytes. In the MDS-800 and in the Series-II, the Monitor occupied the addresses between F800h and FFFFh in memory. The format of the 8-inch floppy disks was single-sided, 250 KB in simple density (SSSD) coding in FM, or 500 KB for double density (SSDD) encoding in MMFM. ISIS-PDS was incompatible and unique in both software and storage media, reaching 720 KB on 5¼-inch double-sided double density (DSDD) drives in the Intel Personal Development System (iPDS-100).

The ISIS-IV operating system was also incompatible with the previous ones, since it ran on the iMDX-430 Series-IV Network Development System-II.

The languages of Intel ASM80, PLM-80, BASIC-80, COBOL-80 and FORTRAN-80 were available under ISIS-II. ASM86, ASM48 and ASM51 were also available on systems with processors compatible with these assemblers.

"ISIS (operating system)" is at the 47th Position in this list. 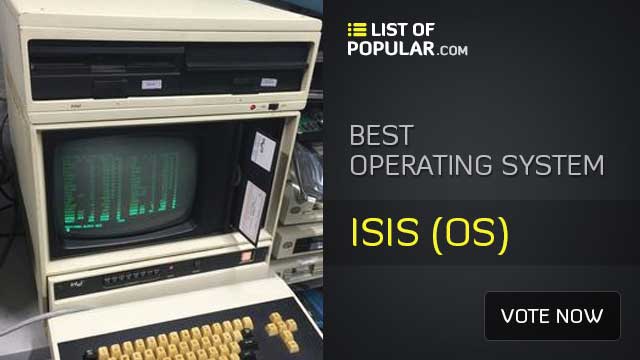