IOS (iPhone OS for June 2010) is the operating system of the iPhone and iPod touch. It is being developed by Apple. It is the second most used operating system on smartphones. There are more than 1,400,000 apps available in Apple's App Store, from which users can download software to add new functionality to the OS.

In September of 2007, Apple released the iPod Touch, which apart from the phone was largely the same as the iPhone. Apple sold more than a million iPhones during the Christmas period of 2007. In January 2010, Apple announced the iPad, a tablet that would run the same operating system. In June 2010, Apple changed the name iPhone OS to iOS. The name IOS has been in use by Cisco for some time, and to prevent a lawsuit, Apple entered into a licensing agreement with Cisco.

IOS only works on devices released by Apple. However, new versions of iOS are not always released for older devices. For example, one year after the last sale of the iPhone 4 (the 8GB model was sold until September 10, 2013), no upgrade to iOS 8 (available since September 17, 2014) came out for this model.

This update was released on June 21, 2010 to users of the iPhone 3GS, the iPhone 4 and the iPod Touch third and fourth generation. On the iPhone 4, which was released three days later, iOS 4 was pre-installed. Users of the iPhone 3G and iPod Touch second generation received a variant with limited functionality. The first iPhone and first generation iPod Touch received no update. The update was free for all users. The most important features of iOS 4 were, among other things, the addition of multitasking, FaceTime image calling and folders, with which the user could organize applications.

Various other features have been added in later versions, such as Game Center (4.1), HDR photography (4.1), iTunes Ping (4.1), Airplay streaming of video, photos and music (4.2) and internet sharing through Personal Hotspot. IOS 4.2 was the first update in which the iPad was supported. Earlier, support for the iPad was delayed because there were wifi and 3G connection problems.

IOS 5 was announced during the WWDC 2011, the newest major release of iOS. The update was made available on October 12, 2011, along with the release of the iPhone 4s, to users of the iPhone 3GS, the iPhone 4 and the iPhone 4s, the iPad 1, iPad 2, iPod Touch third and fourth generation. IOS 5 offers several new features such as iCloud, Apple's cloud storage service, and the Notification Center, a central place where users can find things like messaging and missed calls.

In iOS 5 it is possible for the first time to use an iOS device without first having to set it up by means of a computer. A device can automatically synchronize things such as music and contacts with iCloud, making it no longer necessary to connect a device to a PC. For this, the user must first upload his stuff to iCloud. In addition, there is support for over-the-air updates, so that a user no longer has to connect his iPhone to a PC or Mac to be able to update to a new version.

Another innovation is the iMessage application, which allows the user to send messages to all iOS devices with iOS 5. This is also possible on devices that do not have an SMS function. iMessage is integrated with sending text messages on the iPhone. Sending messages to people who do not use iOS 5 is also possible: the message is then automatically converted to an e-mail, an SMS or an MMS.

IOS 6 was announced during the WWDC 2012. The version is also available on the internet as a download for members of the iOS developer program. The system runs on the iPad 2, the third and fourth generation iPad, iPhone 3GS / 4 / 4s / 5 and iPod touch 4th and 5th generation. In terms of interface, this version does not or hardly differ from iOS 5.

New functions, improvements and changes compared to iOS 5 are:

IOS 7 was introduced during the WWDC (10 June 2013). The product has been completely overhauled in appearance. It also contains more than 200 new functions, including:

IOS 8 was demonstrated on 2 June 2014. In the fall of 2014, iOS 8 became available to all users. Until then, only developers could use the beta version. In appearance it is practically the same as iOS 7, there are mainly new features added. For example, widgets can now be seen in the notification center and the lock screen has been given an emergency button that can easily be used to get the medical ID in the event of an accident can request information from the victim or call the emergency services. Apple also added a Health app to iOS 8. From September 17, 2014, iOS 8 is for everyone with an iPhone 4s, iPhone 5, iPhone 5s, iPhone 5c, iPod touch fifth generation, iPad 2, iPad third / fourth generation, iPad Air, iPad mini or iPad mini Retina available and downloadable. For people who have purchased an iPhone 6, iPhone 6 plus, iPad Air 2 or iPad mini third generation, iOS 8 is already installed.

IOS 9 was announced during the WWDC 2015. In iOS 9, Siri was greatly improved and multitasking was improved on the iPad. Furthermore, the Maps, Passbook, Newsstand and Notes apps were heavily modified. IOS 9 is compatible with the same devices as iOS 8. It therefore supports all iPhones since the iPhone 4S, the iPad 2 and the 4th generation iPad, all iPad Minis, all iPad Airs and the iPod Touch 5th generation.

Siri has gained deeper integration with Spotlight (the search system on iOS) has become a more proactive assistant. For example, Siri knows better what the user wants and Siri can help the user better. In addition, Siri can also speak Flemish from iOS 9. From iOS 9, Spotlight has deeper integration with apps and with Siri. For example, notes from an alternative note app can be found by Spotlight.

IOS 10 was announced during the WWDC 2016. IOS 10 resembles iOS 9 in appearance, but there are still some changes. The control panel (Control Center) has been completely redesigned and now has more color. Notifications also look different: they are less transparent and more white. The well-known 'slide to unlock' has disappeared with effect from iOS 10: instead, the user gets a Widgets panel. To unlock the device, the user must press the home button once. Various apps including Maps have also been completely redesigned. From iOS 10, it is also possible to hide standard Apple apps, so that they are no longer on the home screen.

IOS 11 was announced on June 5, 2017 during Apple's WWDC, and became available on September 19, 2017. Innovations can be found in the App Store, the control panel, dragging files, an improved keyboard, the 'do not disturb' function while driving, Augmented Reality, a new photo and video format, AirPlay 2, and a new emoji. 32-bit applications are no longer supported from iOS 11.

IOS 12 was announced on June 4, 2018 during Apple's WWDC and became available on September 17, 2018. Improvements can be found in performance. New elements can be found in Messages, Facetime, Photos, Safari and Maps. The iBooks application has been renamed to Apple Books. Screen time is also new, with which insight can be gained into the usage time.

IOS 13 was announced on June 3, 2019 during Apple's WWDC and will become available in the fall of 2019. Will be new in this version - dark mode, improved Photos and Camera, improved privacy and security with Sign in with Apple, improved Apple Maps, improved Siri, new emoji functionalities, improved Reminders application, completely renewed CarPlay Dashboard and improved performance, and also many other small improvements.

The user interface of iOS is based on "direct manipulation", the direct manipulation of objects that are in view. The operating system is designed to be operated with the user's finger. In addition, the device can respond to the sensors built into the devices, such as, for example, the accelerometer (to detect lying or standing position), distance sensor (to detect whether the user is holding the phone to his ear) and a light sensor, to adjust the brightness of the screen automatically.

Applications for the iPhone can be built in the program Xcode. Like applications for macOS, they are written in Objective-C, a variant of programming language C, and Swift. Creating applications is only possible on macOS. Among other things, a simulator is included in the iOS SDK and since Xcode 7 it is possible to sideload applications onto the device without paying a Developer member.

"iOS" is at the 6th Position in this list. 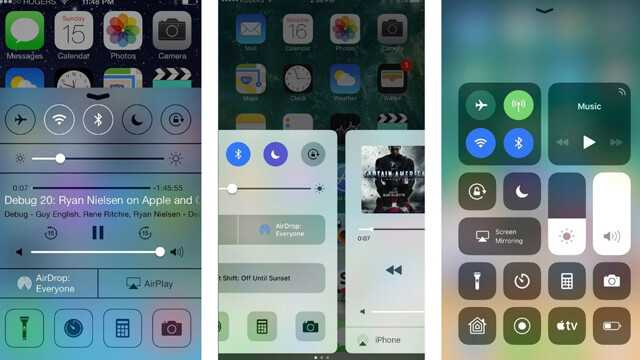