Haiku, formerly known as OpenBeOS, is an operating system to open source for platform x86 trying to maintain backwards compatibility with the now discontinued BeOS. Its development began in 2001 and became self-hosting in 2008. The first alpha release was made in September 2009, and the first most recent beta release in September 2018, development is still active in 2018 with "nightly images".

Haiku is supported by Haiku, Inc., a nonprofit organization based in Rochester, New York, USA, founded in 2003 by former project leader Michel Phipps.

As reported in June 2018, by the monthly activity report, Haiku developers ported LibreOffice for the operating system.

Haiku is an open source operating system under development that focuses specifically on personal and multimedia computing. Inspired by BeOS (Be Operating System), Haiku aspires to become a fast, efficient, easy to learn and use system, without neglecting its power for users of all levels. The project is led by Haiku, Inc., a nonprofit organization located in New York.

Immediately after Be Inc., the company that developed the BeOS operating system, was sold to Palm, Inc. in 2001. A number of BeOS enthusiasts have started developing the then OpenBeOS. In order to prevent possible problems with the use of BeOS in the name of the open source project, it was decided in 2004 to change the name of the project to Haiku, a reference to the famous error messages in the Haiku form of the internet browser included with BeOS NetPositive.

The Haiku project aims to fully redevelop the latest BeOS version, Release 5. After this, the focus will be on the further development of the operating system and the associated software applications. During the development of Haiku, an attempt will be made to maintain compatibility with existing BeOS software in order to have an extensive range of working programs available after the first release.

Unlike many other operating systems, Haiku does not have a taskbar. There is, however, a start button in the top right corner of the screen that opens the Live menu (Leaf menu), which can be moved to please by dragging. Here you can also activate four desktops. The folder structure on the hard disk has been kept very simple. Installing software is usually done with zip files and must be done very carefully. By replacing libraries, already installed software can no longer work or, in the worst case, Haiku will no longer start up. This will certainly change in the future. For browsing the internet, Haiku has Webkit and Minefield (Firefox3), where support for Flash is still problematic, Silverlight is not an option and Java is being worked on.

Haiku is focused on personal computing and has its own modular micronucleus, called NewOS, which is highly optimized to work with audio, video, graphics and animations in three dimensions, being inspired by the one used in BeOS. Its core architecture provides accommodates multiple processors, high performance, bandwidth input/output and a penetrating modular system multithreaded for system reentrant processes multitasking, graphical flexibility and response time real. Unlike other operating systems, Haiku Os is natively graphic, a feature inherited from BeOS. It also has visual programming by nodes from the program outputs through a native software called Cortex.

Currently it has own browser based on webkit called Web + or WebPositive which supports HTML5, giving the ability to watch videos on YouTube and Dailymotion among many other pages that support multimedia formats.

Some other features that it has are:

It is compatible with BeOS, both at the source and at the binary level, allowing written and compiled software for BeOS to be compiled and run without modifications to Haiku. This provides Haiku users with an instant library of applications to choose from (even programs whose developers have not updated), in addition to allowing the development of applications created for BeOS. This dedication to compatibility has its drawbacks, for example, requiring the use of version 2.95 of the GCC compiler, which is now 10 years old. The change to a more modern version of GCC would break compatibility with BeOS, something that Haiku developers try to avoid.

These compatibility issues only apply to x86 systems, and not to the PowerPC version of BeOS R5. As a consequence, Haiku's ARM, 68k and PPC architectures versions must use GCC version 4. Because of this, problems occur with compatibility with a number of the add-ons system used in private APIs, which will not be implemented. This includes file system and codec add-ons.

The compatibility with the controllers is incomplete, and it is unlikely that they will cover the large number of controllers available in BeOS. On the other hand, Haiku offers a layer of compatibility with network drivers based on FreeBSD, which means it can support network hardware that works in FreeBSD. The API for audio controllers and low-level controllers for storage devices and SCSI adapters will not be compatible with BeOS, unlike USB 2.0 and 3.0 devices, already supported on BeOS in versions R5 and R5.1 ("Hurt").

In other aspects, Haiku is more advanced than BeOS. For example, the interface kit allows the use of a design system to automatically place the elements in the window, while in BeOS the developer has to specify the exact position of each element by hand. This allows graphical user interfaces that will be correctly represented with any font size and makes the location of applications much easier, automatically changing the size of the element by changing the length of sentences in different languages.

Haiku released its third alpha version for x86 computers (32 bit) on 20 June 2011. Haiku has also successfully participated in the Google Summer of Code. In the third alpha version, the old Firefox BeZilla browser from the BeOS time was relieved by Firefox 3 under the name MineField (this name was used to indicate test versions of Firefox). Through TiltOS, many KDE applications including KOffice have now been ported to Haiku. Version Beta 1 has been available since 2018.

Being Haiku a free operating system offers the possibility that each individual can create and compile their own distribution. There are currently two distributions already installed programs: TiltOs and Senryu. The two distributions have virtual machines ready to be able to test them without having to install them on a computer.

"Haiku" is at the 11th Position in this list. 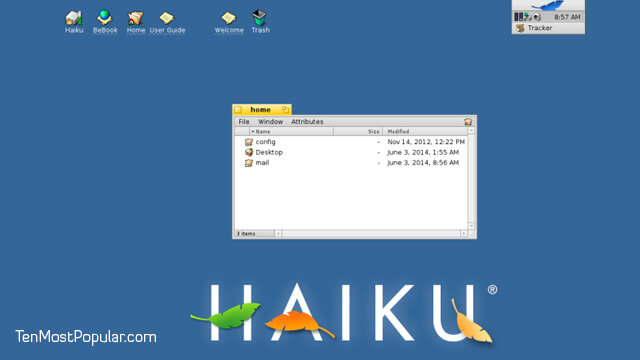