Chrome OS is a project carried out by the Google Company that is based on the Linux kernel and uses the Google Chrome web browser as its main user interface, it is a cloud based operating system. Therefore, Chrome OS mainly supports web applications. It was initially focused on netbooks and simple laptops. When Chrome OS is used on desktops it is called Chromeboxes.

Chrome OS was announced on 7 of July of 2009 through the official blog of the company. The operating system was initially oriented for mini-laptops, being available as of June 2011. The first Chrome OS notebook, known as Chromebook, arrived in May 2011. Initial shipments of Samsung and Acer Chromebooks occurred in July 2011. It works on microprocessors with x86 or ARM technology.

Chrome OS has a media player and an integrated file manager. It supports Chrome Apps, which resemble native applications, as well as remote desktop access. Some Android apps have been available to the operating system since 2014.

Chrome OS is based on the open source project Chromium OS, which, unlike Chrome OS, can be compiled from the downloaded source code. Chrome OS is the proprietary commercial version installed on specific hardware manufactured by Google partners such as Samsung, Acer and LG Electronics, among others.

Google Chrome OS can run on x86 and ARM processors. The source code for the project was made public on November 19, 2009, and the first Chromebooks running Google Chrome OS were expected on June 15, 2011. Google Chrome OS is not related to the Android operating system developed for smartphones. There is a possibility that Android and Chrome OS will partly be merged in the future.

Meanwhile, in September 2014, Google launched App Runtime for Chrome (beta), which allows certain Android applications to run on Chrome OS. At the beginning the update was launched with the possibility of downloading four applications for Android: Duolingo, Evernote, Sight Words and Vine. Many more applications can now be installed from Google Play.

The first features that Google highlights is that its operating system is an open source project at no cost. Like the Google Chrome browser that has the Chromium project as the open project for its development, Google Chrome OS has Chromium OS as an open source project for its development. Google also highlights that its user interface is simple, fast, and secure, because its main use tool is the Google Chrome browser. The operating system is designed in such a way that the user can connect to the Internet in a matter of seconds. It will have support for x86 and ARM processors, and with the support of a large list of hardware and software manufacturers.

On November 19, 2009, the Chromium OS open project was launched, a project that allows the open collaboration of the development of Google's operating system. The core of the system is Linux, and it has tools from the Linux environment.

7 December 2010, Google announced a pilot program that involves sending a laptop (notebook) at no cost to those US residents who want to start testing in a previous stage, the Chrome OS operating system. The computer has a 3G connection, thanks to the Verizon mobile phone provider, Wi-Fi connection, a 12.1-inch LCD screen, integrated camera, multi-touch touchpad, and a modified keyboard specially for Chrome OS.

On May 11, 2011, in the Google I/O event two Chromebooks powered by Chrome OS, manufactured by Samsung and Acer, are presented. Both Chromebooks feature SSD units, no optical drive, multi-touch touchpad, 12.1 and 11.6-inch screens, Wi-Fi or 3G connection, and long-lasting batteries for up to 8.5 continuous hours. On June 15, 2011, Chromebooks are released for sale to the public, with prices ranging from $349 to $499 USD.

Google has announced that it has developed a relatively safe operating system where users do not have to worry about viruses, malware and updates. It is also safe because each tab runs in a separate sandbox.

Google Chrome OS will run almost exclusively on netbooks with a solid state drive (SSD). There are no traditional applications for the desktop, it is only possible to run web applications via the built-in web browser Google Chrome. The user's data is stored encrypted on the SSD and this is constantly synchronized with the online services being used.

Chrome OS is designed in a minimalist way, because its main tool is the Google Chrome web browser. In this way, the company plans to move much of the user interface from a desktop environment to the Internet. In fact, Google refers to its Chrome OS project as a natural extension of the Chrome browser. In other statements for a developer audience, Google emphasizes that the web is the platform, noting that web-based applications will work in Chrome and vice versa.

The main features of the user interface are:

One of the points that Google highlights most is the speed of the system, with a boot time of 8 seconds and a fairly short shutdown time, in addition to how quickly it opens its web applications.

All documents, applications, extensions, and configurations are backed up online under the concept of cloud computing. So if the user loses his machine, he can obtain another one or access it from another machine, and obtain exactly the same data that he previously maintained.

Chrome OS can only be obtained through the direct purchase of a Chromebook, with 3G or Wi-Fi connection to always be online. Google's promise is that Chrome OS is always connected, no matter where. In addition, in the development versions of Chromium OS, 4G connections (LTE) with other devices are already being tested.

It will also have an updated security architecture. Google emphasizes the fact that its Chromebooks will not suffer from viruses or malicious programs. Because many current operating systems were designed in times when the internet was not predominant, Chrome is designed with this in mind, thus eliminating entrenched common security risks.

The most important regarding security Chrome OS points are:

The first multi-touch gestures were seen on the Chrome Notebook (Cr-48), but with basic operations, such as two-finger page scrolling... But Google will provide full multi-touch support of up to four fingers in stable versions.

All downloaded multimedia content, such as music or videos, can be played using the Chrome OS integrated media player.

To solve the hardware driver compatibility issue of the different printers available on the market, Google launches Google Cloud Print (still in Beta). Which allows you to print documents from any device and application, it is only necessary to connect the printer to Google Cloud Print and also connect using Chrome OS to send the print order.

Although Google Chrome OS is largely based on the same source code as Chromium OS, there are a number of differences including:

Chrome OS is an independent project of the Android operating system, which was designed primarily for use on smartphones. The new Chrome OS focuses on users who spend most of their time on the Internet.

"Google Chrome OS" is at the 4th Position in this list. 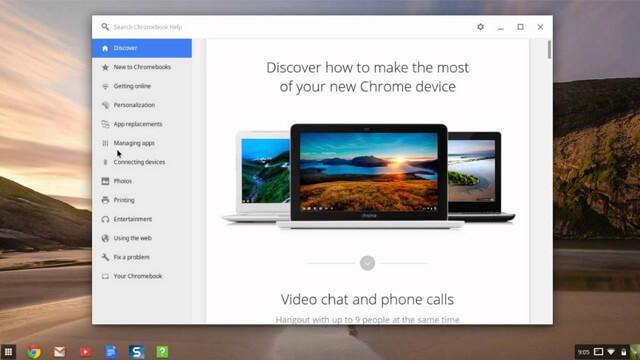