FacebookTwitterWhatsAppEmail
The FreeBSD is a free Unix-like type operating system. It comes from the Research Unix via the Berkeley Software Distribution (BSD). However, for legal reasons FreeBSD can not use the Unix trademark. It is a descendant of BSD, which was historically called "BSD Unix" or "Berkeley Unix". The first version of FreeBSD was released in 1993 and today FreeBSD is the most widely used open source BSD distribution, accounting for more than three-quarters of all systems using BSD derivatives.

FreeBSD has similarities with Linux, with two major differences in scope and license: FreeBSD maintains a complete operating system, ie the project provides the kernel, device drivers, user space, and documentation, unlike Linux which provides only the kernel and drivers and leaves the system software to third parties. FreeBSD source code is usually released under a permissive BSD license as opposed to the Linux GPL copyleft.

The FreeBSD project includes a security team supervising all software integrated in the base distribution. A small range of third-party applications can be installed using the package management system of the FreeBSD Ports, or by directly compiling the source code. Due to its terms of permissive license, much of the FreeBSD code has become an integral part of other operating systems such as Juniper JUNOS and OS X from Apple.

"FreeBSD" is at the 5th Position in this list. 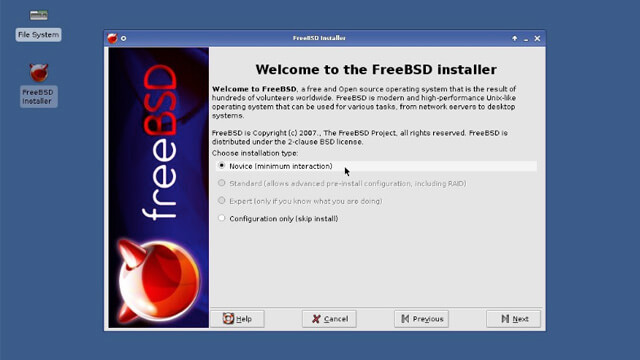 Total Votes: 11148
Votes received:203
Up votes:201
Down votes:2
1.9% Popularity
99% Up votes
1% Down votes
Go to voting page
Comments on FreeBSD
Submit
Cancel
1 Comments
I love both Linux and BSD but there's something about BSD that makes it mystical. Maybe it's the excellent documentation, maybe it's the consistency of the filesystem, maybe it's the minimal configuration. There's a lot to love and you'll feel right at home when you first use it.
0
0
Reply