Otto Louis Christian Lagoni (November 27, 1867 in Øster Hæsinge at Faaborg - May 8, 1944 in Odense) was a Danish actor who has participated in some silent films, mainly in supporting roles, but also in some major roles.

He was a trained musician and came to stage debut in 1888 in Aalborg. Three years later he was employed at the Dagmarteatret in Copenhagen. And in 1892 and 1893 he toured in Norway, first from Arendal to Stavanger, and then on to Tromsø, Vadsø and Vardø. Back in Denmark in 1895 he was engaged at Frederiksberg Theater, Casino, Aarhus Theater and was at Odense Teater 1917-27 and again from 1937 until his death in 1944. His last theater performance was May 6, 1944 as Leonard in The Political Jug of Ludvig Holberg. He hated Herman Bang and accused him of having destroyed his career opportunities early.

Otto Lagoni was a diligent film actor and starred in about 80 silent films between 1909 and 1913. His most prominent role was as Sherlock Holmes in three films from 1911.

He was the son of merchant Peder Christian Lagoni and Marie Sophie Frederikke Spøhr. He was married to actress Alma Kristine Lagoni (girl name: Olsen). He died on May 8, 1944 and is buried at Assistens Cemetery in Odense. He has written the autobiography “Before the carpet goes down” (1938).

"Otto Lagoni" is at the 59th Position in this list. 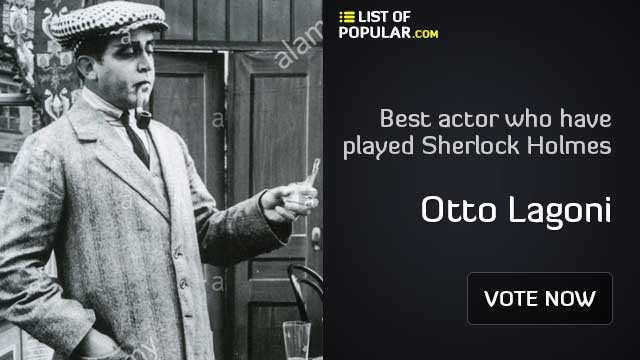