Basil Rathbone, actually Philip St. John Basil Rathbone (Johannesburg, June 13, 1892 - New York, July 21, 1967) was a British actor born in South Africa. He was nominated for two Oscars nominations. Became famous for his performances of Sherlock Holmes and villains elegant in films of swordsmen such as 'The Mark of Zorro' (1940) and 'The Adventures of Robin Hood' (1938).

Three years after his birth, Rathbone's family left South Africa after his father was called a spy by the Boers. The Rathbones went to the United Kingdom. From 1906 to 1910, Rathbone attended Repton School, where he paid more attention to sports than studies, but also discovered an interest in acting. On the advice of his father, he started working for an insurance company as a clerk after school. He kept this up for one year and then contacted his cousin Frank Benson who worked for a Shakespeare company in Stratford-upon-Avon.

He had to start at the bottom in 1911 with smaller roles. In 1915 he joined the army to participate in the First World War. Rathbone became second lieutenant in the Liverpool Scottish, 2nd Battalion. In 1919 he returned to Stratford-upon-Avon and continued with Shakespeare roles there, but after a year he went to the theater in London. A year later, he made his Broadway debut in the United States in the silent film Innocent (1921).

In 1939, Rathbone played his most famous role as Sherlock Holmes, with Nigel Bruce as Dr. Watson, first in The Hound of the Baskervilles (1939) and then in The Adventures of Sherlock Holmes (1939), followed by 12 films and numerous radio broadcasts in the following six years.

Rathbone returned to theater in New York in 1946. Over the next twenty years, he performed in numerous television shows and films such as: Casanova's Big Night (1954), Tales of Terror (1962), and The Comedy of Terrors (1964) and his one-man show, An Evening with Basil Rathbone, with toured the United States.

He made his first appearance in the theater at the Theater Royal in Ipswich, on April 22, 1911, with the role of Hortensius in the play The Taming of the Shrew, in the theater company of Sir Frank Benson, under the direction of Henry Herbert. In October 1912 he traveled to America with the same company, acting as Paris in Romeo and Juliet, Fenton in The Merry Wives of Windsor, As You Like, etc. Back in England he appeared in London at the Savoy Theater on July 9, 1914, in the role of Finch in David's Sin. In December of that year he appeared at the Shaftesbury Theater playing the Dolphin in Henry Vfrom Shakespeare. During 1915 he traveled with Benson and appeared with him at London's Court Theater in December, in the role of Lisandro in A Midsummer Night's Dream.

During the 1919 summer festival he worked in Stratford-upon-Avon with the New Shakespeare Company playing Romeo, Cassius, Ferdinando in The Tempest, Florizel in The Winter's Tale etc. In October he was at the Queen's Theater in London playing the role of Aide-de-Camp in Napoleon, and in February 1920 he worked at the Savoy Theater in the lead role of Peter Ibbetson with great success.

During the 1920s, Rathbone regularly performed plays by William Shakespeare as well as other roles in English theater. He began traveling and appeared at the Cort Theater in New York in October 1923, and toured the United States in 1925 debuting in San Francisco (May) and at the Lyceum Theater in New York, (October). He returned to the United States again in 1927, 1930, and 1931, when he appeared on the scene alongside Ethel Barrymore. He continued his theatrical career in England, returning to the USA. in 1934, where he worked alongside Katharine Cornell on various works.

He also started his film career in 1925 in The Masked Bride, appeared in a few silent films, and was Detective Philo Vance in the 1929 film The Bishop Murder Case. Rathbone became famous as portraying graceful villains in 1930s costumes and swordsman movies, including David Copperfield (1935), Ana Karenina (1935) (portrayed as Anna's husband), The Last Days of Pompeii (1935), Captain Blood (1935), A Tale of Two Cities (1935), Robin of the Woods (1938)Tower of London (1939), and The Sign of Zorro (1940). Frankenstein's Son is the third film in the Frankenstein series from Universal Studios and the last one starring Boris Karloff as the monster. Released in 1939, it is often cited among the best of that year. Rathbone played Dr. Frankenstein's son, Dr. Wolf Frankenstein.

He was admired for his mastery of the sword in his films (he recognized fencing as one of his favorite hobbies), particularly in the beach duel in Captain Blood and as Sir Guy of Gisbourne in Robin's long fight scene from the forests. Other notable sword fights appear in Tower of London, The Fox Sign, and The Court Jester (1956). Despite his real-life prowess, Rathbone only won one sword fight in the movies, in Romeo and Juliet (1936). Rathbone won Oscar nominationsas a supporting actor for his roles as Theobaldo in Romeo and Juliet (1936), and as King Louis XI in If I Were King (1938).

Despite his film successes, Rathbone insisted that he wanted to be remembered for his theatrical career, which was also legendary, and he regarded Romeo as his favorite role.

Basil Rathbone passed away from heart disease in New York in 1967, at the age of 75. His body was buried in a crypt at the Shrine of Memories Mausoleum at Ferncliff Cemetery in Hartsdale, New York.

Rathbone married in 1914 with actress Ethel Marion Foreman, from whom he divorced in 1926. During his first marriage he maintained a brief relationship with actress Eva Le Gallienne. He married for the second time in 1927 with the writer Ouida Bergère.

He had a son with his first wife, Rodion Rathbone (1915-1996), who had a brief career in Hollywood under the name of John Rodion. Basil and his second wife adopted a daughter, Cynthia Rathbone (1939-1969). Like Charlie Chaplin and unlike some of the contemporary British actors on Hollywood and Broadway, Rathbone never renounced his British citizenship.

"Basil Rathbone" is at the 3rd Position in this list. 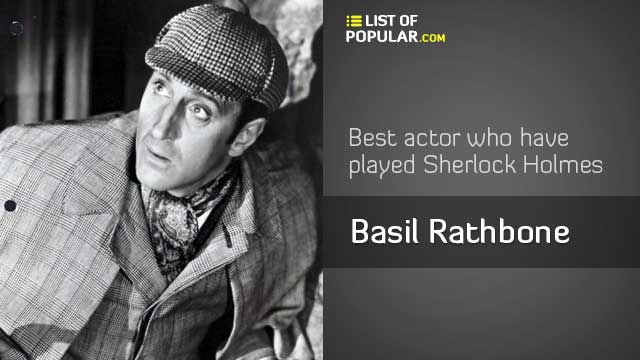