FOX News Channel, often referred to as FOX News, is an American television network that broadcasts news programs 24 hours a day. Some previously broadcast programs are repeated in the night.

FOX News Channel has been available in the United States since 1996, both by cable and by satellite. Many a cable company offers the transmitter in its standard package. The channel is owned by the Fox Corporation, which Rupert Murdoch owns.

FOX News can be received in around 85 million American households and is viewed daily by an average of 2 million viewers. According to the American research agency Nielsen Media Research, FOX News was the most viewed American news channel in May 2010, ahead of MSNBC and CNN, occupying places two and three respectively.

Rupert Murdoch is the founder of FOX News. He founded the channel because he felt that the current American media landscape was left-wing oriented. He already had experience with setting up a news channel, thanks to the launch of Sky News in the UK.

Murdoch gave the station slogan Fair and Balanced (Fair and neutral) along with the addition subslogan We Report. You Decide.

In February 1996, Murdoch contacted Roger Ailes after he was fired from America's Talking, just before joining MSNBC. A team of employees who had worked very closely with Ailes at NBC followed him to FOX News and thus provided a base of employees for FOX. Soon space was sought in New York.

At the time of the launch on October 7, 1996, only 10 million American households could receive the news channel. For example, FOX News did not reach the major cable markets of New York and Los Angeles. That is why FOX invited a number of important journalists to give a positive report of the channel's affairs, but the journalists did not see what the FOX management had promised them. They found programming and reporting very superficial and unbalanced. For example, they found that in The O'Reilly Factor some guests were tackled too harshly by Bill O'Reilly and some too mildly, which would convey a certain opinion. Also Talking Points Memo would be unbalanced criticism of Democrats to spread. Despite all the negative publicity, News Corporation kept putting money in the news channel. News Corporation also ensured that over the years FOX stations received money to maintain their news departments. What many external news journalists announced - a quick end, because they were (according to them) too subjective - did not eventually happen and FNC soon became one of the largest news channels in the United States.

FOX News quickly managed to win over a large proportion of the conservative viewers of established American news media by responding to the demand of these viewers, unlike the other news channels.

During the Monica Lewinsky affair, FOX News broadcast a one-hour program around this affair every day. According to leftist groups, the channel insisted several times on the resignation of incumbent President Bill Clinton.

During the 2000 presidential election accused the FOX News presenter Bill O'Reilly, the Democratic presidential candidate Al Gore sure he quasi collective government wanted a socialist basis. This caused unrest among the mainly conservative viewers who generally do not like socialism.

In the 2000 US presidential election, FOX News was the first to announce that George W. Bush had won the election. For example, the channel reported that Bush had won the state of Florida with a narrow majority. Remarkable was that John Prescott Ellis, a cousin of winner George Bush, made the decision. Other American news channels, such as MSNBC, CNN, ABC News and CBS News, named FOX News Bush as the winner. However, it turned out to be weeks before the final result of Florida was actually known. The FOX report would therefore have been premature.

In 2016, several Fox News female employees accused Fox News leaders of sexual harassment. Fox News boss Roger Ailes changed after accusations on the part of Megyn Kelly and Gretchen Carlson. A settlement of $20 million was made with Carlson. O'Reilly stepped out after it became known that he had made five settlements with women in the past, agreeing that they would not make any statements about his sexual escapades. Presenter Geraldo Rivera apologized to actress Bette Midler for committing abusive acts with her in the seventies.

FOX News and the Netherlands

After the murder of Theo van Gogh, a report about the so-called Holland Daze (Dutch wind) was shown on the channel, in which it was shown how the tolerant Netherlands was transformed into a country where the usefulness of a more rightful and stricter policy was recognized. The great attention paid to this case was considered remarkable in the Netherlands, given that the attack on Pim Fortuyn received little attention.

Also at the time of the murder of Theo van Gogh, conservative television columnist Cal Thomas came up with a column about the collapse of Dutch tolerance. The columnist cited Dutch euthanasia policy and described how newborn babies were murdered in a Groningen hospital because they did not meet medical standards. The columnist said that a country that has no moral standards will turn into an anarchist society, and he even drew a parallel with Nazism. The television column that was also on the NOS Journaal at the time received a lot of responses. One Dutch response was that euthanasia policy was the result of a democratic majority. Cal Thomas responded by saying that newborns cannot vote and that this was a ridiculous argument. In the months following his column, Cal Thomas received a particularly large number of (mainly Dutch) responses. In his subsequent columns, he interpreted these people as immoralists.

O'Reilly also attacked Dutch tolerance in his Talking Points Memo column, because he mentioned the pregnant woman in Big Brother and the BNN program in which two program makers experience what it is like to be addicted to drugs. O'Reilly called the Netherlands a morally reprehensible country that will perish under its tolerance. He also included the failed integration of immigrants and the prediction that in 2025 Amsterdam will accommodate more foreigners than natives.

During the disappearance of Natalee Holloway, Aruba, the place where the disappearance took place, was constantly in the news with the channel. The program On The Record with Greta Van Susteren reported the disappearance from Aruba every working day. Both Bill O'Reilly and John Gibson, both columnists in their own television program, spoke about the 'weak' justice on the island and of the Dutch authorities and called for a true boycott of the island in the tourist area. Greta Van Susteren also called for a massive response to the boycott. In addition to the presenters of FNC, the American "television doctor" Phil McGraw (better known as Dr. Phil) also reached this conclusion.

FOX News can be followed on the radio via various broadcasters throughout the United States. There are different programs, the presenters of which are often the same as on TV. Examples include the Radio Factor with Bill O'Reilly (broadcast until 2017), The Alan Colmes Show (broadcast until 2017), The John Gibson Show and Kilmeade and Friends presented by Fox News commentator Brian Kilmeade. The radio station can be received via short wave (AM) and also on the, often used in the US, digital satellite radio. Fox News Radio is also known as Fox News Talk and can be received 24/7 via the internet.

"Fox News Channel" is at the 13th Position in this list. 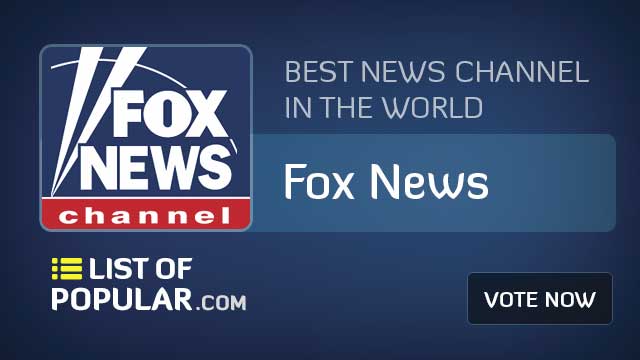 Total Votes: 7833
Votes received:244
Up votes:161
Down votes:83
2.7% Popularity
66% Up votes
34% Down votes
Go to voting page
Comments on Fox News Channel
Submit
Cancel
12 Comments
Unfortunately I voted up instead to vote down. I don't like and trust this channel
1
0
Reply
stop sponsoring white supremacist...
1
0
Reply
not a world news channel, adresse only American news
1
0
Reply
I love watching Fox News, they are I love how they stand up for truth, keep up the good work.
5
4
Reply
A declining news channel for grumpy old white men.
4
3
Reply
View 1 reply
They are all rich, just like cnn, MSNBC, CBS, ABC. PEOPLE NEED TO GET FACTS AND QUIT RELYING ON THESE PEOPLE.
0
2
It’s an entertainment, not a real news
0
0
Reply
this channel has very little to do with news
0
0
Reply
Fox News is telling the story of the working families in America. These are the hard working middle class family trying their best to maintain a solid foundation for there children and country.
1
1
Reply
Fox News reports news that other channels do not cover
0
1
Reply
Fox News need to report the facts not disinformation
2
3
Reply
Fox News don't stand for facts there more of opinionated news we need facts not disinformation
0
3
Reply