CNN (Cable News Network) - a channel created by Ted Turner on June 1, 1980. It is a division of Turner Broadcasting System (Turner) owned by Warner Media. Company CNN first introduced the concept in the world of 24-hour news broadcast. As of June 1, 2005, CNN consisted of 14 different cable and satellite news channels, two radio stations, six Internet sites and 37 foreign bureaus. They are transmitted using signals from 38 space satellites and are available for viewing to more than 200 million households in 212 countries and territories of the world. One of the key moments in the history of CNN was the coverage of the war in the Persian Gulf, in January 1991, for the first time military actions of such magnitude were shown on live television. TV reports from the scene in the Persian Gulf markedly strengthened CNN's prestige as a 24-hour international news source.

Despite its leading position in the United States, CNN is in second place among the international news services, behind the BBC audience almost one and a half times (BBC World News - 277.6 million households). The reason for this may be the relatively small age of the company compared to one of the oldest television and radio broadcasting corporations in the world, besides that BBC World is available openly from many popular satellites, while CNN broadcasts are mostly coded.

CNN in the USA

According to the Nielsen rating, CNN ranks first among the news networks. However, it is inferior to the Fox News news network in terms of the number of long-term viewers (Nielsen's spot ratings). CNN broadcasts mainly from its headquarters in downtown Atlanta, and from studios in New York and Washington. In the United States of America, as of December 2004, the news channel was available in 88.2 million apartments and houses and in more than 890 thousand hotel rooms in the USA.

CNN's Russian office is located in Moscow. The first CNN broadcasts in Moscow began in 1986 during the visit of US President Ronald Reagan to the USSR. Broadcasting was carried out for technical purposes using a backup transmitter 24 UHF 100 W from the Ostankino tower. The constant on-air retransmission of CNN on a twenty-four-hour basis began in 1991 and lasted until January 1, 1998. The channel was popular among English-speaking viewers living in Moscow, students, business audiences, and significantly contributed to the development of broadcasting in the decimeter band in subsequent years.

Also in the first half of the 1990s, CNN collaborated with the Russian federal channel TV-6 Moscow on the 6th meter button, relaying news programs with a Russian simultaneous translation by Peter Kartsev. The founders were Eduard Sagalaev and Ted Turner.

Since December 31, 2014, cable and satellite operators have stopped broadcasting CNN in Russia due to changes in Russian legislation.

In February 2015, CNN submitted an application to Roskomnadzor for a broadcast license and re-registration of the media. On March 23, the Federal Service for Supervision in the Field of Communications, Information Technology and Mass Communications (Roskomnadzor) issued a universal broadcasting license to CNN International.

At the end of April 2015, the CNN channel resumed broadcasting in Russia. It also entered the package "United" the largest Russian satellite operator Tricolor TV.

On July 2, 2017, the Multimedia Information Center (MIC) Izvestia concluded cooperation agreements with CNN International. The solemn signing took place on June 2, 2017 within the framework of the St. Petersburg International Economic Forum. Under the terms of the agreement, MIC will be able to broadcast CNN news stories and special reports on all of its sites, and these are the REN TV HD and Fifth Channel television channels, the Izvestia newspaper and the Internet portal and television channel iz.ru. It is also reported that MIC employees will have the opportunity to annually receive training at CNN headquarters in the United States.

Media researchers Edward Herman and David Peterson wrote in 2000 that CNN was dependent on the commercial and diplomatic support of the US government abroad, and for this reason most of the news was generated by the television channel based on government press releases and reports. They criticize CNN for conscious alliance and symbiosis with the authorities, which leads to the TV channel becoming uncritical media, and the work of its employees is largely reduced to covering the "correct" press conference, inviting relevant guests on the air and saying without errors all names. Herman and Peterson also concluded that during the bombing of Yugoslavia in 1999 by CNN de facto acted as a NATO information weapon. 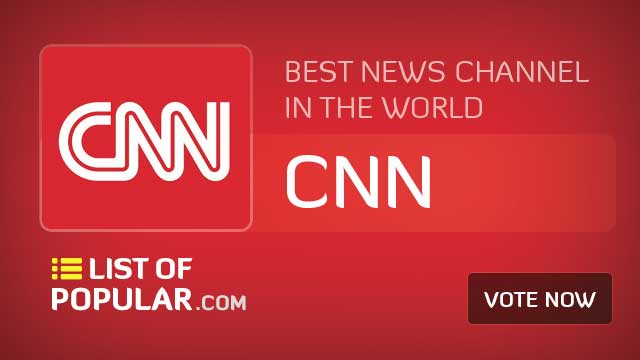 Total Votes: 7833
Votes received:215
Up votes:145
Down votes:70
2.43% Popularity
67% Up votes
33% Down votes
Go to voting page
Comments on CNN
Submit
Cancel
6 Comments
Very negative vibes is all I see I don’t like watching news that don’t stick to the good things that are happening in our country, All I see is false accusations. I no longer like this channel.
4
2
Reply
Very reliable station give us the facts and only the facts
2
1
Reply
Racist. Why Don Lemon is even allowed to spread his racist propaganda against White people is beyond me. I think we need to remind him his partner is a White man. That must be a seriously toxic relationship. How can it not be.
0
0
Reply
hypocrite media..
0
0
Reply
Fake news, caters to the left
1
1
Reply
old fashion news approach, need to change its style, not dynamic news understanding anymore
0
0
Reply