Aaj Tak is a Hindi news TV channel. It is owned by TV Today Network Limited. Aaj Tak is one of the most watched Hindi news channels in India. Aaj Tak's headquarter is located in New Delhi, India.

Aaj Tak has also been awarded as the best news channel by Limca Book of Records.

Aaj Tak was first broadcast on DD Metro of Doordarshan in the year 1995. It was then broadcast as a news program at 10:20 pm. Aaj Tak came into existence in December 1999 as an independent news channel and then it became the first complete Hindi news channel in the country to be broadcast twenty four hours. By the time the Aaj Tak channel came into existence, it had a reach of 52 lakh households and since then it has become the channel to broadcast in 3 crore households and its viewership in news channels is 55%.

Some of the people currently (2019) associated with Aaj Tak are:

Some of the programs aired on Aaj Tak till August 2012 are as follows:

"Aaj Tak" is at the 58th Position in this list. 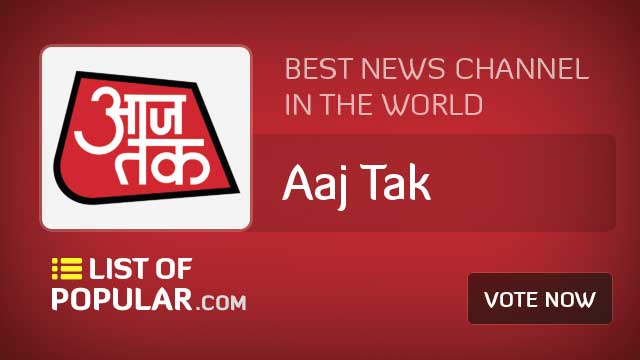 Total Votes: 7833
Votes received:58
Up votes:33
Down votes:25
0.55% Popularity
57% Up votes
43% Down votes
Go to voting page
Comments on Aaj Tak
Submit
Cancel
2 Comments
Hello, your blog is more informational for me thanks for sharing such type of content really. It is a very helpful and knowledge worthy content like us and we provide Latest news of India in hindi to our curious readers.
0
0
Reply
FAKE HAI MODI K GULAAM
0
0
Reply