Empire Test Pilots' School (ETPS) is a British flight pilot school for test pilots and flight engineers, flight mechanics in charge of fixed wing and helicopter test flights. The school is located at the Boscombe Down Air Base in Wiltshire, England. When the school was established in 1943, it was the first of its kind in the world.

The school's motto is: Learn to try, try to learn.

The school is run by QinetiQ with a long-term contract with the British Defense Ministry.

The school was established in 1943 after a large number of deaths of pilots during the trial of the many new types of aircraft that prototypes were made during the war.

On June 21, 1943, the unit was termed the "School of Trial Flight Pilots" which was part of the "Aircraft and Weapons Testing Facility" at Boscombe Down. The school would graduate pilots and technicians with knowledge and skills in testing, research and development in aeronautics and aerodynamics both in the air force and the aviation industry.

The first training, which began in the summer of 1943, graduated on February 29, 1944. 18 candidates started the course. Most came from the Royal Air Force and the Fleet Air Arm of the Royal Navy. Three civilian participants came from the aircraft manufacturer "Bristol Aeroplane Company". Five of the candidates quit after a week since the math requirements were too high. Five of the students from the first training course died later during test flights.

In October 1945, the school moved to RAF Cranfield due to rapid growth and lack of space. It moved back to Farnborough in July 1947, where the school was for almost 21 years. In January 1968, the school moved again and returned to Boscombe Down where it still holds.

Until 1963, the courses were common to pilots for aircraft and helicopters and for flight technicians, flight mechanics. Since then, separate courses have been arranged for helicopter pilots, and from 1974 there are separate courses for flight technicians, flight mechanics. Also shorter courses are arranged for other players in the flight than the military.

This school was the first of its kind, but was quickly followed by other schools like the US Air Force Test Pilot School at Edwards Air Force Base in California in 1944, the US Naval Test Pilot School in Maryland in 1945 and EPNER in France (École du Personnel Navigant d'Essais et de Réception) in 1946. Other schools have since been established in India, (Indian Air Force Test Pilots' School, in Bangalore) and in Japan. Several of these schools have exchange programs that allow students to test a large number of aircraft types. The American, French and British schools are particularly active in such exchanges for their students.

In 2010, the school uses the following flight types:

"Empire Test Pilots' School" is at the 8th Position in this list. 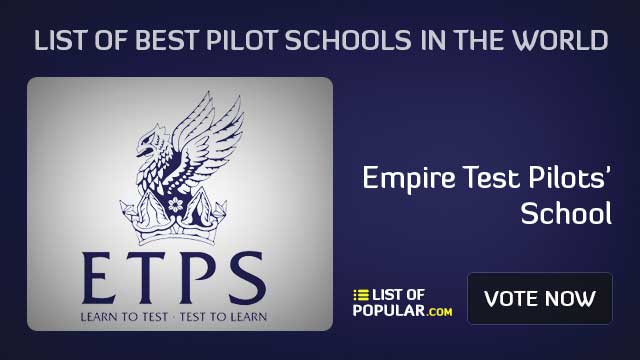