Muhammad Ali (Louisville, Kentucky; January 17, 1942 - Scottsdale, Arizona, June 3, 2016), born Cassius Marcellus Clay Jr., known early in his career as Cassius Clay, he was an American boxer, considered one of the best of all time. He was a social figure of enormous influence in his generation, in politics and in social or humanitarian struggles in favor of African-Americans and of Islam.

He was characterized by his style of boxing away from traditional technique, although he was a connoisseur of the sport and its opponents. He was led most of his career by coach Angelo Dundee, and held memorable fights against the most renowned fighters of his time, such as Archie Moore, Henry Cooper, Sonny Liston, Floyd Patterson, Ernie Terrell, Joe Frazier, George Foreman and Ken Norton. Six of his fights have been considered the best of the year by The Ring magazine. He poured both clearly irreverent opinions about his opponents, as well as accurate predictions of his contentions.

Outside the ring, Muhammad Ali emerged as a figure with social influence since the 1960s when he opposed his recruitment by the armed forces of his country during the Vietnam War. He declared himself a conscientious objector, despite the rejection of the defenders of American nationalism. He was part of the religious organization of the Nation of Islam and, although he won detractors for his behavior independent of stereotypes about African-Americans, from the 1970s he gained respect as a world-renowned sports figure, especially after his fight against George Foreman. In the twilight of his career, began to show signs of physical exhaustion, after his retirement he suffered from Parkinson's disease.

Among numerous recognitions he received the Presidential Medal of Freedom, entering the International Boxing Hall of Fame, the title of "King of Boxing" by the World Boxing Council and "Athlete of the 20th Century" by Sports Illustrated and the BBC, among others.

Muhammad Ali's record as a professional boxer ended in 56 wins, 37 of them by knockout and 19 by decision, while it accumulated five defeats, four of them by decision and one by abandonment. During his career he was recognized by the magazine The Ring as the undisputed champion of the heavyweights between the years 1964, 1967 and 1974-1978, and heavyweight champion between the years 1964-1967, 1974-1978 and 1978-1980. In addition, six of its combats were considered like the best of the year by that same means of communication: in 1963 against Doug Jones, in 1964 against Sonny Liston, in 1971 against Joe Frazier, in 1974 against George Foreman, in 1975 against Joe Frazier and 1978 against Leon Spinks.

During the years 1960 and 1970, Muhammad Ali enjoyed a great world-wide popularity, especially in those countries that had population where Islam predominated. This was because the demonstration of their pride in being African-American and the extraordinary faith in themselves found an echo in those who believed they were discriminated against, either because of the color of their skin or their place of origin.

In order to achieve this fame, its link with the Nation of Islam was fundamental. The rapprochement with that organization had begun in 1959, but it was in 1961 when he began his conversion. In order to make this decision, his friendship with Malcolm X, who gave him his support before the important fight against Sonny Liston, was decisive. Malcolm X had his reasons: he believed that a victory by Ali would prove the "superiority" of Islam in the world, since the meeting was actually a kind of "crusade" that confronted Muslims and Christians, in which his opponent represented the "infidels". In fact, Malcolm X was one of the few personalities close to the young boxer who were confident of his victory over the intimidating Liston. It should be added that at that time, Malcolm X had been suspended from the Nation of Islam due to inadequate comments about the assassination of John F. Kennedy. However, many years later Ali would regret having separated from this religious leader, whom he said was "the first to discover the truth, that color does not make a man a demon".

When Muhammad Ali won the Olympic medal in Rome, he was proud of the United States. For example, when asked by a Soviet reporter if he had been a victim of racial problems, the young boxer accepted the problems in question, but also made it clear: "Understand: it is still the best country in the world." He expressed that opinion despite coming from a segregated society, where he was taught that white-skinned people were "superior". It should be noted that in his youth he avoided participating in the protests against segregation.

"Muhammad Ali" is at the 1st Position in this list. 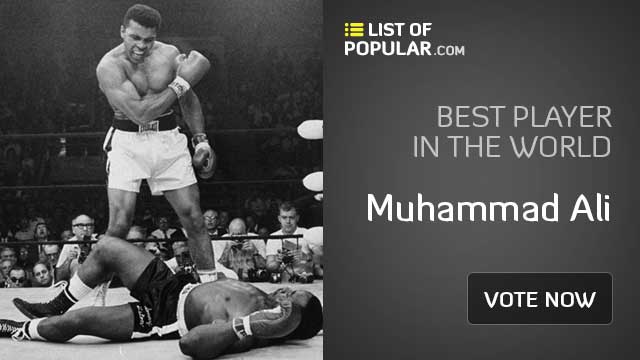