Xí Jìnpíng (Beijing, 15 of June, 1953), is a politician of the People's Republic of China, President of the People's Republic of China and General Secretary of the Communist Party of China. Xi, the main member of the Chinese Communist Party Secretariat, the President of China, the director of the Central Party School, and the most important key of the Politburo Standing Committee, which is the de facto control body of the country.

Son of Communist politician Xi Zhongxun, Xi Jinping began his political career in Fujian Province, and was later chosen as party chief in the neighboring province of Zhejiang, and later promoted to party chief of Shanghai after the resignation of Chen Liangyu. Known for his liberal stances, tough fighting against corruption, frankness and openness to political and economic reforms, Xi Jinping is the emerging leader of the fifth generation of leaders of the People's Republic of China.

He assumed the post of President of China on March 15, 2013, succeeding Hu Jintao, in the main legislative session of the National People's Congress.

In 2013, it announced the Belt and Route Initiative, an investment project in infrastructure projects in several countries in Asia, Africa and Europe, with the goal of increasing China's economic influence. In 2017, he was elected by The Economist as the most powerful man in the world.

In 2018, the Chinese parliament approved the life term for Xi Jinping.

Xi Jinping was born on June 15, 1953 in Beijing, and his family has ancestral roots in Fuping, Weinan, Shanxi Province. He is the youngest son of Xi Zhongxun, one of the founders of the communist guerrilla in Shaanxi and former deputy prime minister of the country. At the time of Xi Jinping's birth, his father was the head of the Communist Party propaganda department, and later vice-chairman of the National People's Congress. When Xi was 10 years old, during the Cultural Revolution, his father was expunged and sent to work in a factory in Luoyang, being arrested in 1968. Without the protection of his father, Xi Jinping went to work in Yanchuan, Shanxi in 1969, during the Down to the Countryside Movement of Mao Zedong. Xi Jinping became secretary of the production team of the local branch of the Party. When he left in 1975, he was only 22 years old. Xi reminded that "it was exciting, it was moving, and when the ideals of the Cultural Revolution could not be realized, it became an illusion." From 1975 to 1979, Xi studied chemical engineering at Tsinghua University.

Xi was named as one of the most influential people in the world in 2009, 2011 and 2012 by Time magazine. In September 2009, at the Fourth Plenary of the 17th Central Committee of the Communist Party of China, Xi Jinping was not chosen as the vice president of the Central Military Commission (CMC) as expected, raising some questions about his succession. Political analyst Cheng Li believes that Xi's failure to secure the CMC promotion was evidence that the Communist Party was the development of internal controls, giving way to more sophisticated mechanisms for succession of leadership. Xi Jinping was officially appointed to the vice presidency on October 18, 2010, a position of Hu Jintao, held in 1999, before taking over the secretariat and the years of the presidency after. At the 18th Congress of the Chinese Communist Party on November 8, 2012, Xi was chosen to be the Secretary-General of the Communist Party of China and President of China, a position he assumed on March 14, 2013.

Xi was described in a 2011 in a Washington Post article by those who know him as "pragmatic, serious, cautious, hardworking and discreet." Xi was also described as a good hand at solving problems and "seemingly disinterested in the pitfalls of high office." He is also known for worshiping Hollywood films such as The Rescue of Private Ryan and The Departed, also praising independent filmmaker Jia Zhangke.

Xi's family members have substantial business interests, although there is no evidence that they were assisted by Xi's political stance.

Xi married the famous Chinese folk singer Peng Liyuan in 1987. Peng Liyuan, a household name in China, was much better known to Xi's audience until his political rise. The couple often lived apart due largely to their different professional lives. They have a son named Xi Haun and a daughter named Xi Mingze, who is a Harvard undergraduate in fall 2010 under a pseudonym to have no favor.

He is known for being a football fan. It encouraged the practice of the same in the country, making the sport become a mandatory icon in Chinese schools, building thousands of soccer fields scattered throughout the eastern country. In addition to enhancing the Chinese Football Championship.

"Xi Jinping" is at the 1st Position in this list.

Most Powerful Politician in the World 2019 | List and Ranking 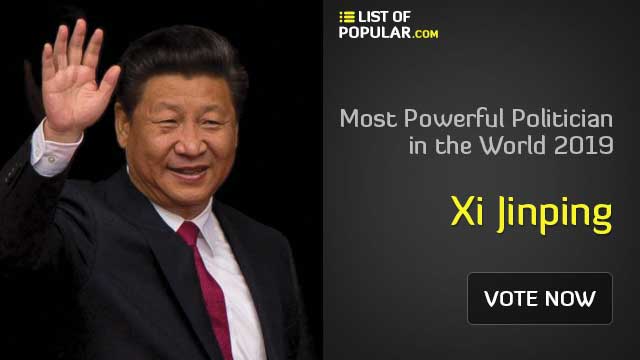