Hazrat Nooh or Nuh (in Islam) or Noah was a prominent messenger and ancestor of religions (Christianity, Judaism and Islam) revered in Abraham. He is known only for saving creatures during the deluge. The boat on which all creatures survived is known as Ark of Noah.

The beginning of mankind

This is the history of the earth and the sky. This story is about the things that happened when Yahweh created the earth and the sky. Then there was no tree plant on the earth and nothing was growing in the fields, because the Lord had not sent rain on the earth till then and there was no man to take care of the tree and plants. But the fog rose from the earth and water irrigated the whole earth. Then the Lord lifted the dust from the earth and made man. Yahweh breathed life into man's nose and man became a living being. Then the Lord planted a garden in a place formerly called Aden. The Lord kept the man he had made in this garden. The Lord grew every beautiful tree and all the good trees for food in that garden. In the middle of the garden, Yahweh placed the tree of life and also the tree which gives information about good and evil. A river flowed through Aden and it watered the garden. That river went ahead and became four small rivers. The name of the first river is Pishon. This river flows around the Havila region. The second river is named Gehon which flows around the entire Ethiopia region. The third river is named Tigris. This river flows east of Assyria. The fourth river is Euphrates.

Yahweh placed man in the Garden of Eden. Man's job was to plant trees and care for the garden. Yahweh commanded man, you can eat fruit from any tree in the garden, but you cannot eat the fruit of a tree informing about good and evil. If you eat the fruit of that tree you will die.

Then Yahweh said, "I understand that it is not right for a man to be alone. I will make him a helper that suits him." Yahweh made every animal of the earth and every bird of the sky from the soil of the land. The Lord brought all these creatures to man and man named each one. Man named all the pets, all the birds of the sky and all the animals in the forest. Man saw many animals and birds but man could not find any assistant who deserves it. So Yahweh put the man in to a deep sleep, and while he was sleeping, Yahweh took a rib out of the human body. Then the Lord closed the skin of the man from where he had taken the rib. Yahweh created a woman from the rib of man. Then Yahweh brought the woman to man.

Of all the animals made by Yahweh, the cleverest was the snake. He wanted to cheat the woman. The snake said, "O lady, has God really told you not to eat fruit from any tree in the garden?" The woman said, "No, God did not say that. We can eat fruits from garden trees. But there is a tree whose fruits we cannot eat." God told us, 'You cannot eat the fruits of the tree in the middle of the garden, you will not even touch it, otherwise you will die.'

But the snake said to the woman, "You will not die." God knows that if you eat the fruit from that tree, then you will know about good and evil and then you will become like God. The woman saw that the tree was beautiful. He saw that the fruit is good to eat and the tree will make him wise. Then the woman took fruit from the tree and ate it. Her husband was also with her so she gave him some fruits and he also ate that.

Then both men and women changed. Their eyes opened and they looked at things differently. They notice that they have no clothes, they are bare. So they took some fig leaves and added them and wore them for themselves instead of clothes. Then the man and woman heard the sound of the coming of the Lord Yahweh in the garden in the coldest day of the day. They hid among the trees in the garden. Yahweh cried and asked the man, "Where are you?" The man said, "I heard the sound of your coming to the garden and I got scared. I was naked, so hid." Yahweh asked the man, "Who told you that you are naked? What makes you shy? Did you eat the fruit of that particular tree that I had commanded you not to eat?" The man said, "The woman you made for me gave me fruit from that tree, and I ate it." Then the Lord said to the woman, "What did you do?" The woman said, "The snake tricked me. He fooled me and I ate the fruit."

Noah and the Flood

Noah always followed God throughout his life. Noah had three sons, Shem, Ham and Japheth. God looked at the earth and saw that people had ruined the earth. Violence is widespread everywhere. People have become sinful and corrupt, and they have ruined their lives on earth. So God told Noah, "All the people have filled the earth with anger and violence. Therefore I will destroy all living beings. I will remove them from the earth. Use Goper's wood and build a ship for yourself. Make room in the ship and ship it in and out of the resin. The size of the ship I want to build is three hundred cubits long, fifty cubits wide, and thirty cubits high. Make a window for the ship about one hand down from the ceiling, a door next to the ship. Build three floors in the ship. Upper floor, middle floor and lower floor."

Understand what I am telling you. I will bring big heavy water floods on the earth. I will destroy all creatures under the sky. All the creatures of the earth will die. But I will save you. Then I will make a special covenant with you. You, your sons, your wife, your sons' wives will all board the ship. At the same time, you will have to bring pairs of living beings on the earth. Bring each pair on ship. Keep them alive with you. Also find pairs of birds of all kinds on earth. Also find pairs of all kinds of wild animals of the earth. Find the pairs of every creeping creature on the earth. Male and female animals of every type of earth will be with you. Keep them alive on the ship. Bring all kinds of food on earth. This food will be for you and animals. Noah did all this. Noah obeyed all of God's commandments.

"Noah" is at the 7th Position in this list. 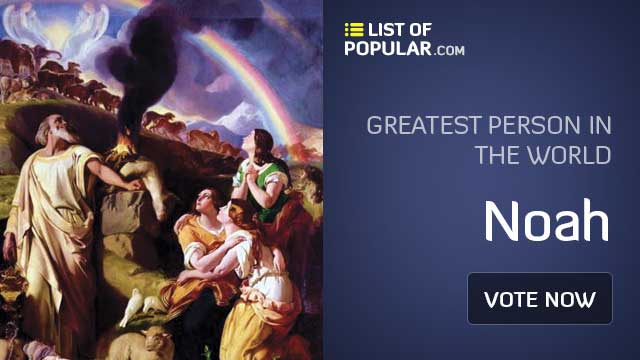