Mother Teresa, born Agnes Gonxha Bojaxhiu (Skopje, August 26, 1910 - Calcutta, September 5, 1997), was a Catholic sister, founder of the Missionaries of Charity and Nobel Peace Prize winner. She worked among the poorest of the poor in India. The congregation she founded in 1950 had more than 3,500 members in 1995 with 300 homes in 25 countries.

After her death, a day of national mourning was proclaimed in India. She received a state funeral, an honor normally given only to the highest political leaders in India.

Agnes Gonxha Bojaxhiu was born in the Ottoman Empire (now North Macedonia) and grew up in a prominent Albanian Catholic family. At the age of 17 she joined the Order of Our Lady of Loreto in Rathfarnham, Ireland. A year later she left for Calcutta in India where she became a teacher at a girls' school. There she chose the name Mother Teresa in reference to Theresia van Lisieux.

Struck by the fate of the countless homeless sick and dying, wandering children, hungry and lepers, she decided to devote herself to these poorest of the poor. She left her monastery with the permission of Pius XII and set up a worldwide work in arms in Calcutta, which she led until shortly before her death. She founded the Order of Missionaries of Charity, a religious order for sisters in Calcutta. A Dutch home of the Missionaries of Charity, founded in 1977, is located in Rotterdam, a Belgian home was established in Ghent in 1980.

In 1979 she received the Nobel Peace Prize for her work.

In 2002, the Vatican recognized the healing of a malignant tumor in the belly of Monica Besra, India, as a miracle. Monica Besra testified that when she went to Mass she saw a photo of Mother Teresa entering the church and those rays of light were coming out of her eyes. After this she felt dizzy and was put to bed by sisters. The sisters placed a medallion of Mary on her growth. She was cured six hours later. To this end, 113 witnesses were heard and 35,000 pages of documentation were collected. However, there is controversy over the veracity of these witnesses and documentation. Besra's doctors say her cyst and tuberculosis have been cured by their treatment.

On September 4, 2016, nineteen years after her death, Mother Teresa was canonized by Pope Francis during a special mass on St. Peter's Square.

Mother Teresa has been both praised and criticized for her views on responsible parenting and the dignity of unborn life. The Belgian atheist and philosopher Etienne Vermeersch wrote critically about Mother Teresa because she spoke out against artificial contraception, but in turn received criticism from philosopher Herman De Dijn. Journalist Christopher Hitchens wrote a critical book on Mother Teresa: The Missionary Position: Mother Teresa in Theory and Practice (1995), to which Belgian sinologist and literary Simon Leys responded in 1997. First this happened through the reader section of the New York Review of Books and later in an elaborated essay The Hall of Uselessness (2011) in which he denounced Hitchens' lack of knowledge of the Christian tradition.

In a 2003 article, Hitchens claimed that Mother Teresa would have stolen money from Haitian dictator Jean-Claude Duvalier (in exchange for which she would have praised his regime) and from Charles Keating, an American banker, who died in 1989 through the bankruptcy of the Lincoln Savings and Loan Savings Bank robbed thousands of Americans of their savings.

Researchers at the University of Montreal have analyzed 300 documents and found details they consider contrary to Mother Teresa's positive image.

Mother Teresa has received many awards, including the following prizes:

In 1969 Malcolm Muggeridge made a documentary for the BBC entitled “Something beautiful for God”. Muggeridge was impressed by Mother Teresa's work, which was filmed for this documentary. For this documentary, footage was shot in a building where Mother Teresa worked, called The House of the Dying. The cameraman, Ken McMillan, used a new type of Kodak film he had never used before to shoot inside this house. Back in England they watched the recordings and noticed that the pictures were made in “The house of the dying” were of very good quality and every detail was visible. The cameraman said he thought it was amazing and extraordinary and then wanted to explain that the quality was due to the new Kodak film. Muggeridge stated that this was divine light. He was convinced that he had witnessed a miracle and testified about it in the media.

"Mother Teresa" is at the 18th Position in this list. 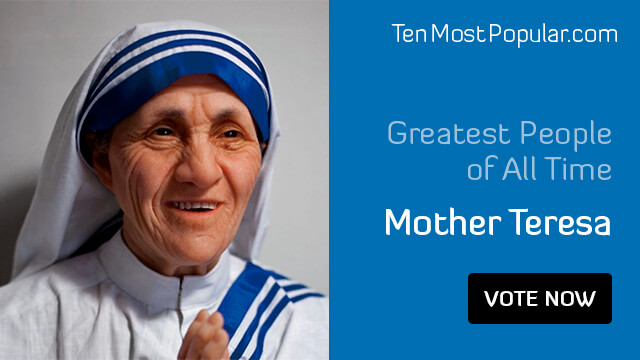