Mary was the mother of Jesus according to the New Testament. She is the most important saint for Catholics. In the Roman Catholic Church and Eastern Orthodox Church, Mary as Mother of God plays an important role in the life of faith. The discipline within theology that focuses especially on it is called mariology. Several liturgical and high festivals are celebrated in her honor. In the Orthodox Church, the common expression is for Mary Theotokos (Mother of God).

According to Luke's Gospel, Mary was engaged to Joseph when the angel Gabriel announced to her that she would become pregnant. Maria asked how this could be, because she had not yet had sexual intercourse. Gabriel said, "The Holy Spirit will come upon you, and the power of the Most High will cover you like a shadow."

Gabriel had even more news: "Your family member Elisabeth is pregnant with a son, despite her old age. She is now, even though she was considered infertile, in the sixth month of her pregnancy." Shortly thereafter, Mary traveled to a city in the Judean Mountains, where she visited Elisabeth and her husband Zacharias. Maria stayed here for about three months.

Sometime later, Mary and Joseph traveled to Bethlehem "to register". When they arrived in Bethlehem, childbirth started and Jesus was born there.

After the birth of Jesus, wise men from the east searched for the newborn "king of the Jews". Herod heard about this and ordered his soldiers to go to Bethlehem and kill all the boys up to two years old (the Bethlehem infanticide). However, an angel appeared to Joseph in a dream and instructed him to flee to Egypt with Jesus and Mary.

According to the gospel, they returned to Judea after a time when Herod died. When they discovered that the violent Herod Archelaus was the new king of Judea, they fled to Nazareth in Galilee after a clue in a dream.

According to the tradition of the Roman Catholic Church, "brothers and sisters of Jesus" should not be taken literally. The Catholic Church has accepted the dogma that Mary has always remained a virgin and interprets the word "brother" as "cousin" or "relative".

At Jesus' death and after

According to John, Mary was present at the crucifixion of Jesus, along with John himself, whom Jesus designated on the cross as the son of Mary. When Jesus saw her standing next to "the student he loved dearly", he declared them mother and son. "From that moment on, this pupil took Maria in." After Jesus' death, Mary continued to look at the grave in which he was laid and bought fragrant oil with others to embalm the body. The last mention of Mary says that in the period after Jesus' death, she devoted herself to prayer together with the apostles and her sons.

Mary was born according to a constant tradition from Joachim and Anna. According to the Catholic Church, Mary has been protected from her original sin from her conception, that is to say, she was received immaculate. Also, the Catholic and Orthodox Churches believe that Mary never committed a sin. They appeal to Luke 1:28, where the angel Gabriel addresses her with: "Hail, full of grace." No further details are mentioned in the Bible about her young life, although there is a tradition that she served in the temple.

Various stories are circulating about her further life. According to (Roman Catholic) tradition, Mary must be somewhere between 36 and 50 AD. died in Jerusalem or Ephesus (in the house of the virgin Mary). All the apostles would have been present except Thomas. When this arrived, Mary's body had already been buried, and to pay tribute to her, Thomas visited her grave alone. Thomas would then have seen the Assumption of Mary. He would have received her seat belt from Maria. The rest of the apostles did not believe this until he showed them the belt and the empty tomb.

As a 'Joseph's marriage', her marriage to Joseph is still used as a terminology for a spiritual, non-sexual marriage community. The early belief of the Oude Kerk and the church fathers, that God certainly kept the woman virgin from which her son was born, was later elaborated more and more. The belief that Mary kept her virginity before, during and after the birth of Christ is still passed on today by the Catholic and Orthodox Churches.

The everlasting virginity of Mary was also espoused by Martin Luther and John Calvin, but today many Protestant Christians assume that Mary and Joseph later also had other children together. They refer to several texts from the New Testament that talk about the "mother and brothers" of Jesus. The oldest Greek manuscript speaks of 'adelphói', where the Dutch translation (Matt. 13:55) speaks of 'brothers of Jesus'. Jerome stated that in the Aramean world cousins and second cousins were often called brother (Greek: 'adelphoi'). Lot an ah, a brother of Abraham is mentioned.

Islamic theology also states that Maryam is the mother of Isa (Jesus) and that she was still a virgin. The Quran mentions Imraan as her father.

The Judaism denies that God became man so that Jesus, son of Mary, God and man. Judaism therefore does not attach importance to Mary.

Some, however, see in the Jewish writing Talmud parallels between Mary and a Talmud woman named Miriam. This Miriam was also a Jewish woman married to a carpenter. The Talmud tells how this Mirjam had a child named Yeshu from a Greek or Roman soldier. Some people see similarities with the Christian Jesus in the Yeshu from this story and similarities with the Christian Mary in the Miriam from this story. Many Jewish scholars who have studied this deny that Yeshu and Jesus can be the same person. There are also studies on the Talmud that refute that it tells of Mary and Jesus as Yeshu or Miriam or by any other name.

"Mother Mary" is at the 12th Position in this list. 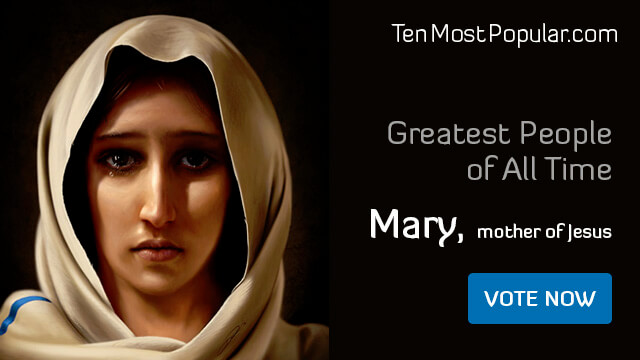