Krishna (कृष्ण, literally "black, dark, dark blue"; Sanskrit for "all-attractive") is one of the most worshiped gods in Hinduism. As such, Krishna is among others the main character in the Mahabharata, Srimad Bhagavatam and the Bhagavad Gita. In many Hindu schools of thought, Krishna is regarded as an incarnation of Vishnu, an avatara, in others as the Supreme Personality or highest manifestation of God energies, God Himself.

According to Vedic tradition, Krishna was born 5,000 years ago in Mathura, capital of the kingdom of Shurasena (in today's Uttar Pradesh) in the country of Bharat-Varsa (present-day India). He was the eighth child of Princess Devaki and her husband Vasudeva.

Krishna would have been born in a stormy night in the month of Shravan (August/September), on the eighth day after the full moon at midnight (Janmashtami) in a prison cell, and would have spent his childhood in Vrindavan (then a village, now a city). The demonic king Kansa, the brother of Devaki, wanted to kill all eight children she would give birth to.

According to his personal astrologer's latest predictions, his bad and selfish rule would soon come to an end. His sister Devaki would give birth to none other than Lord Vishnu at the age of eight. This would put an end to the series of terror years of government that have affected countless citizens and holy people. That is why he had locked his sister Devaki together with her husband in a prison cell. That is why Kansa tried to kill all eight children, just to be sure, but most certainly especially.

Krishna's father Vasudeva, however, escaped at the birth of the eighth child, miraculously with the newborn boy. Even before the king got wind of it, he exchanged the child with the newborn daughter of Yashoda and Nanda in the land of Gokula. When King Kamsa finally received the news that an eighth child was born, he tried to kill it, but the moment he wanted to grab the newborn, the girl flew up from his hands and turned into the Goddess Yogamaya. While floating in the air, she informed him that his death was inevitable by the arrival of her brother, the Supreme Personally. Kamsa then decided to do everything in his power to find and kill this child.

How Kamsa sends demons to Krishna, and how they are effortlessly defeated by Krishna, even though he is still an infant, can be read in the Krishna Book, a summary of the tenth canto of the Srimad Bhagavatam. There are countless heroic deeds of Krishna and his elder brother Balarama, who constantly eliminate demons, who target both them and their devotees and friends in the form of playmates.

On the other hand, Krishna's childhood is known as his sweet, loving period, in which he could devote much time and attention to his devoted followers. This is the Vraja Krishna of Vrindavana with his enchanting flute, who stole the hearts of the cowherd women. While defeating demons, he was able to take care of all his devotees and family members as can be found in treatises such as the Bhagavad Gita, the Srimad Bhagavatam and countless other Puranas.

Krishna's role in the Mahabharata

Later, when Krishna was chosen as the main speaker at a gathering of a large number of kings and rulers, he played a completely different role. Not much later a major war broke out in which 650,000 people died within three days. Krishna had chosen Arjuna as a highly developed soul for the science of self-realization and karma-yoga (loving service to God at the level of Brahman, Paramatma and Bhagavan) to be fully explained. For this explanation, Krishna developed a complex game with all kinds of scenarios, which is extensively told in the epic Mahabharata. One was that Arjuna and his brothers (the Pandavas) would lose a game of dice and not get a piece of land as big as a pin from the blind king Dhritarashtra, not even after the agreed twelve years of exile.

The blind king could not give a clear final judgment that was favorable for one of the parties, and therefore they had to fight it out for themselves. Both parties came to Krishna for help. A feud was inevitable, both on the basis of the positions taken by both sides and because of the will of Krishna himself. Krishna gave both army leaders the choice: either they got his full armies, or they only got Krishna, but then he wouldn't fight. The devoted Arjuna chose Krishna himself. Krishna took the humble position of Arjuna's charioteer and thereby gave him spiritual instruction. Standing on Arjuna's chariot, he therefore instructed him in the Bhagavad Gita, which consists of seven hundred Sanskrit verses. Eventually, the party of Arjuna won under Krishna's leadership. After following the lessons of Krishna, Arjuna and his four brothers achieved liberation from material existence.

King Jarasant had attacked Mathura 17 times. The brother of Krishna, Balrama, wanted to find a safe place for the inhabitants. Krishna had decided to ask the creator of the palace of the gods to make a city in one day that offered the inhabitants safety. The maker asked the god of the sea for a large island, and he asked the gods Brahma, Vishnu and Shiva for spiritual power so that he could make the city. When the city was ready, he went to Krishna again to ask what he wanted to call this city. Krishna saw that the city had many doors and that is why he called her Dwarka ("Gate"). But there was another reason: he called it Dwarka because it was also the gate to heaven for the people on earth.

"Krishna" is at the 51st Position in this list. 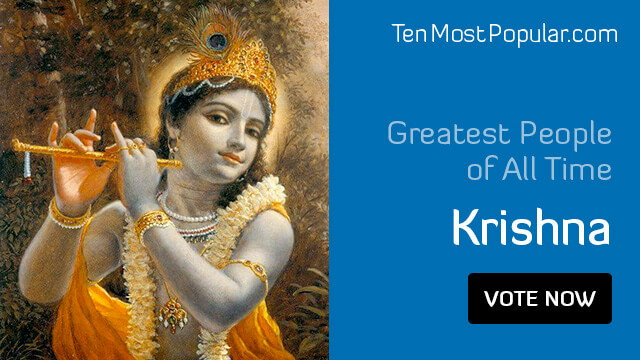