Siddhartha Gautama Buddha was a spiritual leader whose teachings the Buddhism is based. According to Buddhist tradition, he lived from around 450 BC. up to ca. 370 BC. in Nepal. Modern scholars suggest around 480-400. According to religious traditions, Gautama Buddha achieved complete enlightenment Buddhahood.

Gautama Buddha is also called the Sakjamoeni (sakyamuni) Buddha and was born as Siddhartha Gautama. The name Siddhartha means: whose purpose has been accomplished or whose every wish has been fulfilled. He is often referred to simply as (the) Buddha. Buddha means he who is awakened (enlightened). The title Buddha is given to someone who has discovered the Dhamma (the truth, the natural order of things) on his own strength, without a teacher, and has achieved enlightenment. According to tradition there have been a number of other Buddhas before Gautama Buddha (a famous list mentions 28 Buddhas). Buddha was born in a Hindu family. Buddha has in Hinduism acquired the status of ninth avatara of Vishnu.

The Buddha's life story is not generally accepted as an accurate historical representation. Rather, it is seen as a story that serves as an example and source of inspiration for achieving enlightenment in Buddhism.

Siddhartha Gautama was born in Lumbini in southern Nepal. His mother's name was Māyādevī, which also means enlightenment in Sanskrit. Buddha was born in a garden in Lumbini after a ten month pregnancy. He pointed to heaven with the index finger of his one hand and to the ground with the index finger of his other hand. His father, Śuddhodana, was the chosen leader of the Shakya clan. These Kshatriyas controlled an independent territory of which Kapilavastu (Tilaurakot in Nepal or Piprahwa in India) was the capital. The name Sakyamuni is a reference to the Shakya. Literally it means the manner of the Shakya.

Traditionally, Siddhartha Gautama was a prince whose parents had been told by various sages that their child would either become an unbeatably great ruler or reject all earthly goods and achieve enlightenment. Since his father preferred the first prediction, he was surrounded with the best earthly goods, so that he would experience no dissatisfaction or nasty things in his life. He would then not have to give up his possessions. His father built three palaces and Siddhartha Gautama spent all his time within the high walls of the palace. Thus the first 29 years of his life passed. When Buddha was seven days old, his mother died. His aunt Maha Pajapati, his mother's sister, took care of her nephew.

After 29 years, however, he started to think deeply about life and wanted to see what the real life was like outside the palace. He secretly went into the city at night, together with his servant. He was shocked to see an old man, a sick man and a dead man. Because he had never seen an old, sick or dead man because of his protected upbringing, he asked his servant for an explanation. He was told that all people grow old, contract diseases and die. Siddhartha Gautama also saw a calm and controlled monkpass. The servant explained that it was a monk who had voluntarily given up his possessions and led a life of simplicity focused on spiritual development. Shortly thereafter, Siddhartha left the palace and his family (including his young wife and child) to live as a monk in the forests of India.

In Benares he studied with Alara (Arâda) Kalama and Udaka (Udraka, Rudraka) Ramaputta, two well-known and respected masters and quickly qualified in their teachings. He found, however, that this did not offer a solution for the suffering he still experienced. That's why he went his own way and started a six-year period of self-chastisement. He lived far from society, alone in the woods, ate very little and became so thin that he nearly died.

After six years he came to the conclusion that self-torture does not lead to relief (also called nirvana) and the end of suffering. He found a middle ground between achieving sensual pleasure and self-chastisement and decided to meditate under a bodhi tree in Bodhgaya until he would attain full enlightenment or die. The Buddhacarita, the earliest biography of Buddha by Asvaghosa Brahman (c. 80-150), tells how Kâla, the good snake, predicted that he would succeed and that Mâra, the enemy of good law and lord of the world of desire, Vainly tried to disrupt his meditation with his three sons (Doubt, Fun, Pride), three daughters (Lust, Genot, Dorst) and an army of Mâras. After 49 days (seven weeks) he reached enlightenment. From that moment he was Siddhartha Gautama, the Buddha. He was then 35 years old.

He began to teach his newly found insight (the Dhamma) to others. He gave his first speech in Sarnath. During the following 45 years he traveled through the then states of Northern India. He became a highly respected spiritual leader. The kings of the two largest states (Kosala and Magadha) became his disciples, just like many others from all walks of life. Many people decided to become monk (bhikkhu) or nun (bhikkhuni) in the monastic order (the Sangha) of the Buddha. At the age of 80 he died in Kushinagar. His speeches and teachings were recited and memorized by his followers and after his death in two conferences organized by his followers for this purpose, written in the Pali canon, in the language Pali Asked originally orally transmitted words of the Buddha. The oldest known still existing copies of these texts can be attributed to the Buddha.

There are a variety of different traditional biographical sources about the life of Sidarta Gautama that sometimes conflict. These include the Budacarita, the Lalitavistara sutra, the Majavastu and the jataka stories. Of the above, the Budacarita is the earliest and full bio. It is an epic poem written by the poet Asvagosa, which can be dated at the beginning of the second century AD. C. The following biography in antiquity is the Lalitavistara sutra, of the majayana and sarvastivada traditions, dated in the third century AD. C. The Majavastu of the Majasamgika and Lokotaravada schools is another important old biography, composed progressively until about the fourth century AD. C. The biography of the Darmaguptaka School is the most complete, its title is the Abiniskramama Sutra, among other several Chinese translations between the third and sixth centuries AD. C. Finally, the Nidanakata (or Jakata) stories that are from the Teravada tradition of Sri Lanka, which were composed in the 5th century AD. C. by Budagosa.

The Say Nikaya in sutra number DN14 (also called Majapadana Sutra), and Majllima Nikaya in sutra number MN123 (Achariyabuta Sutra) of the canonical source the Jatakas: they include selected narratives that may be ancient, but they are not rigorous biographies. The Jatakas list the previous lives of the Gautama Buddha as a bodhisattva. The first collection of these can be dated among the first Buddhist texts. The Majapadana and Achariyabuta sutras relate the miraculous events surrounding the birth of the Gautama Buddha, such as the descent of the Tuchita bodhisattvafrom the sixth world deva to the mother's womb.

"Gautama Buddha" is at the 22nd Position in this list. 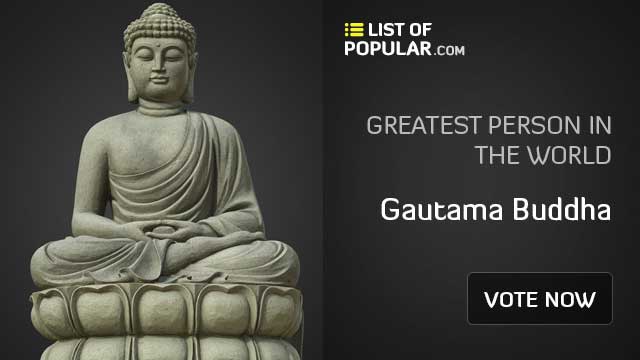 Total Votes: 64235
Votes received:809
Up votes:441
Down votes:368
0.92% Popularity
55% Up votes
45% Down votes
Go to voting page
Comments on Gautama Buddha
Submit
Cancel
17 Comments
Nomo budhay
17
6
Reply
Budha
17
6
Reply
We love Buddhism
18
9
Reply
he is most greatest person in the word
20
11
Reply
namo buddhay
15
7
Reply
Buddha At the top of all because only Buddha Teaches the way of virtue to all the world and show the forward way with peacefully
1
0
Reply
Gauthama buddha is the greatest person in this whole world .there is no one above the lord buddha
1
0
Reply
actually he should be first in the list
1
0
Reply
He is the man of peace ...Namo buddhay
1
0
Reply
Great teacher and guide for huminity ---Gautam Buddha
0
0
Reply
Awesome....gretest person in world
0
0
Reply
Icon of peace.
0
0
Reply
Namo Bhuddhay
2
2
Reply
Lord Buddha preached the medium to the people. He suggested the ways for suffering, its causes and the prevention.
2
2
Reply
Islam is best
2
3
Reply
the lair.
0
1
Reply
Ha ha ha
0
1
Reply