Fatimah (in Arabic: فاطمة الزهراء, 'light', Mecca, on July 27 of 604 in January - Medina, 28 August of 632) was an Arabic woman, daughter of the Muslim Prophet Muhammad and transmitting of the consanguineous succession of this one.

Fatima was the daughter of the Prophet Muhammad from his first wife, Khadijah. She was Muhammad's fourth daughter, after Záynab, Ruqayya, and Ummu Kulthum. At ten years of age (although other sources say she was nineteen years old), she married Ali ibn Abi Tálib, the fourth of the Muslim caliphs and the first Imam of the Shiite Muslims, son-in-law and cousin of Muhammad, with Ali who had three sons: Hasan, Husáyn and Muhsin, and two daughters: Záynab and Ummu Kulthum. Fatima gave them the same name as two of her deceased sisters to distribute the names of the Prophetic House.

For Muslims Fatima is an inspiration and her name is the most popular in the Muslim world.

She participated in several very important political actions registered in all Islamic sources. First, after the conquest of Mecca, she refused to offer her protection (as Muhammad's daughter) to Abu Sufyan ibn Harb. According to some sources, she claimed her father's property rights.

She died a few months after Muhammad's death and was buried in the cemetery of Yánnat al-Baqí. Many Shiite Muslims believe that she died as a result of an injury caused by Úmar, while she defended her husband Ali from the attacks of Abu Bakr.

Fatima was born in Mecca, daughter of Khadijah and Muhammad. There are different opinions on the exact date of her birth, but the most widely accepted opinion is that was born five years before Muhammad received the first Quranic, revelations in March that is the year 605, during the reconstruction of the Kaaba.

Fatima receives many titles from Muslims, who show their admiration for their physical and moral characteristics. The most commonly used title is "az-Zahra", which means "The one that shines" and is commonly known as Fatimah az-Zahra. You are also given the title of "al-Batul" (the chaste) because she spent much of her time devoted to prayer, reciting the Koran and other acts of worship.

After her birth, she was personally attended and cared for by her mother, Khadijah, against the customs of pre-Islamic Arabia, where newborns were sent with nurses to the surrounding villages. She spent her first youth under the protection of her parents, in Mecca, in the shadow of the tribulations suffered by her father at the hands of the Quraish clan.

According to tradition, on one occasion, while Muhammad was praying the salat (prayer) in the Kaaba, Abu Yahl and his men poured camel placenta over it. Fatima, upon hearing the news, ran to her father and cleaned the dirt while scolding the men.

After her mother's death, she felt overcome by the pain and found it very difficult to come to terms with her mother's death. She was comforted by her father, who informed her that he had received a message from Allah through Angel Gabriel, telling her that Allah had built a palace in Heaven for Khadijah.

Many of Muhammad's companions asked for her hand, including Abu Bakr as-Siddiq and Umar ibn al-Jattab. Muhammad denied everyone marriage to his daughter, saying he was waiting for a sign of her destiny. Ali, Muhammad's cousin, also wished to marry Fatima. When he went to see Muhammad, to ask for his daughter's hand, he could not vocalize his intention and remained silent. Muhammad asked him to confirm what he already suspected, if he had come to him to ask for his daughter Fatima's hand. Suggested Ali that he sold his shield, and that with the money he got paid the dowry of Fatima. Later, Muhammad presented Ali's proposal to his daughter, Fatima, and she fell silent and did not reject it as she did with the others. The Prophet interpreted his daughter's silence as a sign of affirmation and consent.

After their marriage, the couple led a humble life, in contrast to the Fatima sisters who were all married to rich individuals. Ali had built a house near Muhammad's residence. However, since Fatima wanted to be near her father in Medina, she donated her own house.

For several years after her marriage, she was doing all the work for herself. The shoulder on which she carried the pitchers of water from the well was swollen and her hands, with which she ground the wheat manually, were often filled with blisters. Fatima did housework, kneaded, baked bread and cleaned the house, in return, Ali worked outside the house, collecting firewood and food, as well as watering farmland and taking water from the wells. Their circumstances were similar to those of many Muslims before the battle of Jáybar, when the product of Jáybar was distributed among the poor. When the economic situation of the Muslims improved, Fatima won some maidens, but she treated them as if they were from her own family and did the housework with them.

An indication of their special relationship is found in the fact that Ali never married another woman while Fatima lived. Some Sunnis believe that Ali asked Abu Yahl's daughter to marry but that Muhammad did not allow him to marry her, as it could alter Fatima's welfare, although this view is rejected by some Shiite Muslims and is not considered a Hadith for the Suna.

After the Battle of Uhud, Fatima attended to the wounds of her husband and her father, and was responsible for periodically visiting the graves of those killed in battle as well as praying for them. Fatima and her husband were called by Abu Sufyan ibn Harb to intercede on their behalf before Muhammad while trying to make peace after the violation of the Treaty of Hudaybiyya. This man also asked for the protection of Fatima when he went to Mecca while he was under occupation, but Fatima, obeying her father's instructions, refused.

After the Farewell Pilgrimage to Mecca, Muhammad called Fatima and informed her that he was going to die soon, and also told her that she would be the next one to die. After Muhammad's death, Fatima was disconsolate and remained in that state until she died less than six months later, during Ramadan.

According to the Sunni version, she spent her time crying and sighing and nothing could take the pain away. As soon as she had done her housework and taken care of her husband Ali and her children Hasan and Hussein, she kept crying and saying: "Oh my dear daddy, who have you left your Fatima?". She spent 6 months this way until she was so thin that it was just skin and bones.

According to the Shiite version, Fatima died as a result of the injuries suffered when Úmar broke into his house by force, setting the house on fire and forcing its occupants to go outside. Úmar assaulted her while she was pregnant and fractured her ribcage. This version of events is recorded in the book "Al-Farook" by the Sufi scholar Maulana Shibli. Shibli argues that Úmar not only killed Fatima, but ended her unborn son's life. According to Shiite tradition Muhammad appeared to her in a dream and informed her that she would die the next day. Fatima, informed her husband Ali about her impending death, and asked that the oppressors (Abu Bakr, Úmar ibn al-Jattab and their followers) not be allowed to participate in their funeral.

"Fatimah" is at the 2nd Position in this list. 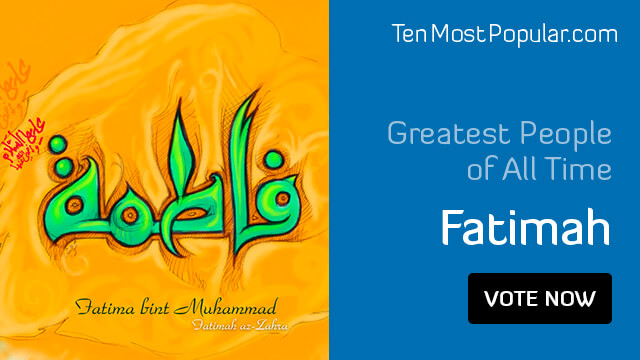 Total Votes: 64235
Votes received:5877
Up votes:5313
Down votes:564
11.05% Popularity
90% Up votes
10% Down votes
Go to voting page
Comments on Fatimah
Submit
Cancel
24 Comments
Fatima is the name of the most popular girl child of Muslim world
71
7
Reply
View 2 replies
Alhamdulillah It's realy true that hazrat fatima { radi Allahu ta'ala } is alone girl in the world who can deserv this position Assalam ya fatima tu zzahra
32
2
She was the daughter of prophet Muhammad and Khatija, wife of Ali and mother of Hassan and Hussein.
28
2
Fatima bintu muhamed scs
39
3
Reply
Love for this great person
33
3
Reply
A new state was established by you, which spread from the maraakash to the Indies and who had a tremendous impact on the views and lives of three continents - Asia, Africa and Europe.
23
3
Reply
👍
20
3
Reply
The best and ever daughter in the world
5
0
Reply
great
3
0
Reply
Girls please look out her life how she survived and you decide how to do you want to leave your life
3
0
Reply
world powerfull women and queen of heven
2
0
Reply
i love fatima yes and am muslim and PROUD
2
1
Reply
Love u sister n muslim ladies must follow you
1
0
Reply
By mistake down button pressed
0
0
Reply
رضی اللہ عنہ
0
0
Reply
Bible wisedom
0
0
Reply
Radiyallahu anhar
0
0
Reply
I know who is that this is the smallest daughter of Prophet Muhammad
0
0
Reply
She is surely the best woman in the world.
0
0
Reply
I think Jesus was better than Mohammed
0
1
Reply
I don´t even know ho is Fatimah.. xD
3
5
Reply
View 1 reply
stupid
1
0
👎👎👎👎👎👎👎👎👎👎👎👎👎👎👎👎👎👎👎👎👎👎👎👎👎👎👎👎👎👎
1
4
Reply
View 1 reply
Pagal insaan
0
0