Albert Einstein (Ulm (federal German state of Baden-Württemberg), 14 March 1879 - Princeton (New Jersey), 18 April 1955) was a German-Swiss-American theoretical physicist of Jewish descent. He is widely regarded as one of the most important physicists in history, alongside Isaac Newton and James Clerk Maxwell. He always referred to Newton as a much more important physicist than himself because, unlike Einstein, Newton also made great experimental discoveries. In everyday life, the name Einstein has become synonymous with great intelligence.

He contributed significantly to other areas of physics: he received the Nobel Prize in Physics in 1921 for his explanation of the photoelectric effect, and his description of the Brownian movement and the first fluctuation-dissipation theorem was an important breakthrough. Moreover, he published these two explanations and the special theory of relativity in his wonderful year 1905. Further work includes topics in quantum mechanics, solid theory, zero-point energy, statistical mechanics, cosmology, the theory of radiation (photons, duality of waves and particles, critical opalescence and stimulated emission, the theory behind the laser) and field theory. A unit in photochemistry bears his name, the Einstein. The chemical element einsteinium is also named after him, as are the Einsteinring in astronomy and the Einstein coefficients in optics.

Albert Einstein was born into a Liberal Jewish family in the German Empire, later lived in Italy, Switzerland and then Austria-Hungary before returning to Germany. When Adolf Hitler came to power in Germany in 1933, Einstein decided to settle in the US. In 1940 he took American citizenship and renounced his German (he retained the Swiss). He died on April 18, 1955 in Princeton of an aneurysm.

Albert Einstein was born on March 14, 1879 in Ulm, and then located in the Kingdom of Württemberg within the German Empire. He was the son of Hermann Einstein (Buchau, 1847 - Milan, 1902) and Pauline Koch (Cannstatt, 1858 - Berlin, 1920). Hermann Einstein was, among others, a bed salesman and later with his younger brother Jakob (1850-1912) a manufacturer of electrical equipment for power plants and street lighting (Elektrotechnische Fabrik J. Einstein & Cie.) In Munich. Hermann and Pauline Einstein-Koch had another child, Albert's younger sister Maja Einstein (Munich, 1881 - Princeton, 1951).

Einstein's parents were liberal Jews and therefore religiously tolerant. Einstein received elementary instruction in Jewish religion and learned to play the violin. In his later life he often played the violin for relaxation, while considering scientific problems. Around 1884, Einstein received his first compass and was baffled by the miracle of the invisible magnetic force. He was the best of his class in elementary school and very interested in exact science. As a hobby he built models and mechanical devices. From 1891 he also taught mathematics.

In 1895, the family moved from Munich to Pavia in Italy, but Einstein initially remained in Munich to finish high school. After one trimester he no longer endured the loneliness and strict school, after which he joined his family in Pavia. In 1895, although he was actually two years too young for it, Einstein took the entrance exam with special permission for the ETH, the Eidgenössische Technische Hochschule (the technical university of Zurich). He performed well in the science subjects, but failed French and History. To finish high school, his parents sent him to Aarauin Switzerland. There he came up with the following thought experiment, which anticipated his special theory of relativity: an observer marrying a light wave at the speed of light sees a standing wave. In 1896, Einstein received his high school diploma, after which he went to the Eidgenössische Technische Hochschule in Zurich. In the same year, Einstein gave up his German citizenship to avoid conscription, leaving him stateless.

At the ETH, Einstein traveled with his fellow students Marcel Grossmann, Mileva Marić and Michele Besso. He was not allowed to carry out his proposal for a test on the movement of the earth in the ether in the laboratory, but was warned that he was not experimenting enough. He thought the lectures of Professor Heinrich Weber were old-fashioned, because the Maxwell theory was not discussed. Through self-study he was introduced to the works of Kirchhoff, Hertz, Helmholtz, Lorentz and Boltzmann. He learned about Maxwell theory through a book by August Föppl. He also read about other sciences such as biology (Darwin) and philosophy. He appreciated Hermann Minkowski's math classes but was often absent.

In 1900 Einstein obtained his teaching qualification as Fachlehrer physics at the Eidgenössische Technische Hochschule. His grades were 5 for theoretical and experimental physics and for astronomy, 5.5 for functional theory and 4.5 for an essay on heat conduction (on a scale of 6). He obtained Swiss citizenship in February 1901.

In 1908, Einstein was appointed private tutor (unpaid lecturer at a university) in Bern (Switzerland). Three years later, Einstein first became an assistant professor at the University of Zurich, and shortly afterwards as full professor at the (German) University of Prague. In 1912 he returned to Zurich to become a full professor at ETH there. At the time, he worked closely with mathematician Marcel Grossmann. In 1912, Einstein began to refer to "time" as the fourth dimension, as his former professor Hermann Minkowski previously did.

In 1914 Einstein became a member of the Prussian Academy of Sciences in Berlin. The following year he regained his German nationality, and until 1933, when he left Germany due to the seizure of power by the Nazis, was director of the Imperial Wilhelm Institute of Physics in Berlin. In this period he also received the Nobel Prize for his explanation of the photoelectric effect. Attempts by, among others, Hendrik Lorentz - who was highly regarded by Einstein - to link him as a full professor at a Dutch university failed. Finally, he did become professor by special appointment because of the Leiden University Fundat the University of Leiden from 1920 to officially 1946: he gave a guest lecturer in Leiden several times a year. In 1921 he received the Matteucci Medal, in 1925 the Copley Medal.

Einstein made his first world trip in 1922. With his second wife Elsa he went to Japan by ship and also visited Singapore, Hong Kong and Shanghai. He also gave guest lectures at Oxford University, where Einstein's chalkboard has been preserved.

Departure to the USA

Einstein's pacifism, socialist sympathies, and Jewish ancestry were a thorn in the side of German nationalists and anti-Semites. After becoming world famous, this anti-Semitic hatred for him grew, and an organized campaign even arose among German physicists to discredit his theories. When Adolf Hitler came to power in Germany on January 30, 1933, the hate campaign against Einstein reached new heights. Einstein was accused by the Nazi regime of advocating "Jewish physics" (in the sense of theoretical physics) as opposed to "German" or "Aryan physics" Arische Physik, which included experimental physics. The regime was supported by Nazi-minded physicists, including even Nobel laureates such as Johannes Stark and Philipp Lenard, who attempted to discredit Einstein's theories. To this end, a blacklist was also created of German physicists who continued to teach Einstein's theories such as Werner Heisenberg.

Einstein was then in the United States, where he delivered a lecture cycle at Caltech. He decided not to return to his native country, but did visit Belgium and England, where he spent time at the University of Oxford before settling in the US for good. He gave up his German citizenship, obtained a permanent residence permit for the US, and accepted a position at the newly established Institute for Advanced Study in Princeton, New Jersey. He became an American citizen in 1940, although he still retained Swiss citizenship.

Einstein died in his sleep in a hospital in Princeton on April 18, 1955. He was hospitalized for a ruptured aneurysm (widening) of the aorta. His doctors wanted to operate on him, but Einstein refused because he didn't want to stretch his life unnecessarily, but wanted to die with dignity. His own body was cremated the same day in Trenton. Then the ashes were scattered in a secret place. Einstein did not like the worship of the general public and wanted to prevent a 'pilgrimage'. His family had authorized an autopsy beforehand, and Einstein's brain was examined by Dr. Thomas Stoltz Harvey, the pathologist who performed the autopsy. Harvey discovered nothing special about this brain and then stored it in a jar filled with formaldehyde in his laboratory. In 1999, a team at McMaster University found that the part of the brain used for mathematical thinking, spatial recognition, and motion insight was 15% wider than normal.

"Albert Einstein" is at the 16th Position in this list. 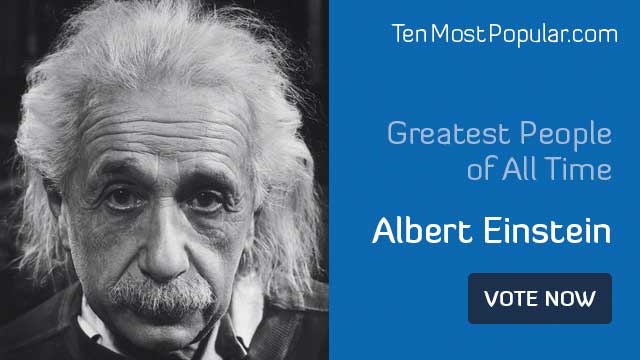 Total Votes: 64235
Votes received:926
Up votes:629
Down votes:297
1.31% Popularity
68% Up votes
32% Down votes
Go to voting page
Comments on Albert Einstein
Submit
Cancel
9 Comments
The man who said "The most incomprehensible thing about the universe is that ,it is comprehensible "
6
0
Reply
He have swag!
4
0
Reply
Best person... Who tried to understand where and why he is
4
0
Reply
Important to the world of math and science
2
0
Reply
he was amazing
0
0
Reply
He deserves to be higher up on the list, at least the top 10. Ask anyone "Who is the smartest person ever lived?" and they will respond "Albert Einstein".
0
0
Reply
He continued generations
0
0
Reply
litti for realli
0
0
Reply
nope
1
2
Reply