Abraham or Ibrahim (Arabic: ابرَاهِيم/Ibrahim), previously called Abram, is, according to tradition in the Hebrew Bible and Quran, the patriarch of the Israelites and Arabs. Because he is also considered in a metaphorical sense by Christians, Judaism, Islam and the Christianity also called the Abrahamic religions.

Sara was his half-sister and wife, Hagar and Ketura were his 'concubines'. Haran and Nachor were his brothers.

In the Hebrew Bible

In stories in the Bible book of Genesis, Abraham is described as an itinerant nomad (farmer and rancher). His father Terach withdrew from the Chaldean Ur to live in Canaan, together with his son Abram and his wife and half-sister Saraï and nephew Lot. But when they got to Haran, they stayed there.

From Abram to Abraham

Terach died in Haran. After this, Abram was instructed by God to go to a land He would show him. God would bless Abram and make him a great nation. Abram left Haran with all his housemates and everything he had and went to the land of Canaan. Everywhere he pitched his tent he built an altar to the Lord. Abram and Lot decided to separate because there was not enough land for their cattle. Lot went to the Jordan region of Sodom and Gomorrah to the east, and Abram went to live near Hebron. After many wanderings through Canaan and Egypt (with Pharaoh) and his encounter with Melchizedek (Genesis 12-15), meanwhile, Abram had grown old and had no successor. "Then the Lord brought him out, and said, Now look up to heaven and count the stars, if you can count them. And he said to him, So will your seed be!" Since Saraï (later Sara) remained childless, Abram (86 years old) fathered a son by Hagar, his slave girl/his concubine and called him Ishmael ("God will hear"). When Abram was 99 years old the LORD to him. As God, He made a covenant with Abram, who named Abrahamsince he was "to be made a father of a multitude of nations." Abraham had to call Sarai henceforth Sarah and she would be given a son "so that she may become nations". After various events, such as the destruction of Sodom and Gomorrah (Genesis 19) and a journey south to Abimelech king of Gerar (Genesis 20), Sarah bore a son, Isaac. Sara was 90 at the time and Abraham was 100 years old.

In Genesis 15, God's words about heredity are confirmed to Abram with archaic-looking rituals today, followed by the phrase, "Abram trusted in the Lord and charged him as a righteous act." (Genesis 15:6) This verse would play an extremely important role in the New Testament in the interpretation of justification by faith or by circumcision, especially with Paul.

The covenant with Abraham, confirmed as a covenant feature in Genesis 17 by the repetition of the promises and by circumcision, became a decisive factor in the later history of the people of Israel and in full Biblical and extra-biblical argumentation. Already with Isaac and at the end of the book of Genesis the covenant was regarded as an oath. Express divine interference was supported by renaming Abram to Abraham (Genesis 17:5), referred to in 1 Chronicles and Nehemiah. This renaming demonstrated, on the one hand, the full sovereignty of God and His power over history, and on the other, His special responsibility for the people thus selected and characterized. The mark of the covenant was circumcision (compare Genesis 17:10-14).

The stories of Abraham also anticipated the different ways in which God could approach a person: Abraham could come into direct contact with God - as later Moses did. God appeared to Abraham in a dream, in a vision in human form with guidance (the "three men" at the oaks of Mamre) and through intermediary divine messengers. Abraham also had prophetic gifts and was called a prophet in Genesis 20:7.

On the one hand, the accounts of Ishmael in the Hebrew Bible show that he is a real son of Abram, who was blessed as such and received promises from numerous descendants (Genesis 16:10, 21:13,18, 25:12-18). (Arab) Muslims believe they are descended from Ishmael - whereby Jews, Christians and Muslims can all be traced back to Abraham as the primal father of all believers. On the other hand, the stories make it clear that the line promised was through Isaac son of Sarah (Genesis 21:1-8). Ishmael and the other sons of Abraham (with his second concubine Ketura) namely Zimran, Joksjan, Medan, Midjan, Jishbak and Suach (compare Genesis 25:1-6) played no role in the succession - focus point from the Biblical perspective. Their descendants were not further mentioned, unlike the line through Isaac.

A central story in Abraham's life is what is known in the Jewish tradition as the "binding of Isaac" - on the altar of burnt offering. In this story, Abraham had to sacrifice his son Isaac to God as a test of his faith. When he was about to do this, an angel stopped him and a ram was ready to take the place of the human sacrifice.

At the beginning of the story, it was made clear that it was a thought experiment: "Some time later God tested Abraham" (Genesis 22:1-2) is the key to reading the entire text. From the beginning, Isaac's joint promises to Abraham and the later people of Israel were at stake. The perfect solution was demonstrated: on the one hand, Abraham surrendered without reservation or doubt to God's will - which was charged to him as a great act of faith (Genesis 15:6). On the other hand, God saved Isaac from death through an angel sent by Him - which became an archetype of threat and salvation to the people of Israel. What later the Israelites experienced in the form of the exodus from EgyptAs a deliverance from a land of slavery, and later in the protection that the people received during the wanderings in the desert, Genesis 22:1-19 portrayed it as an enigmatic, offensive, and in-depth primal narrative.

Abraham himself was described in the story as "the ideal Israelite," saying "you have listened to me [God]", a phrase frequently used in the calls to live God's laws in the book of Deuteronomy. Abraham had followed the precepts, commandments, rules, and laws of God (concepts that stand elsewhere for the revelation of God's law on Sinai or for the Torah as a whole). Genesis 18:19, a statement of God to himself at the meeting with Abraham at the oaks of Mamre, shows that precisely for this reason Abraham was chosen to command his sons and further descendants to keep the way of YHWH and to do justice and justice to do. Abraham thereby adhered to the Torah as a way of YHWH even before it was revealed by God to Moses. Each time these mentions of Abraham mentioned the blessing that all people (nations) would receive through Abraham.

Sarah died at the age of 127 in Hebron, in Canaan. Abraham died when he was 175 years old. He was buried by his sons Isaac and Ishmael, which is said to be the present Cave of the Patriarch in Hebron.

Abraham in the Quran

In the Quran, Abraham is the messenger of the Suhuf-i-Ibrahim, prior to Mohammed and the Quran. The Quran emphasizes to be a continuation of the earlier message that Abraham received. Abraham is emphatically called a Muslim and a Hanif, and the discussions surrounding his faith as to whether he was a Jew or a Christian are completely rejected. The Quran calls him monotheist and also the father of monotheistic peoples.

The story of Ismael (his first son) is to be found in Surah De in de Rangen Beldenden (Abraham in the Ranks) who has to offer Abraham according to God's command. Because Ibrahim wants to fulfill that mission, he is eventually exempted by God. The Feast of Sacrifice in Islam commemorates the sacrifice of Abraham.

According to the Biblical timeline, in 2038 BC, Abram be born. The name change to Abraham would have occurred in 1939 BC, and he would have died in 1863 BC.

Two researchers, L. Thomson (North Carolina, 1974) and John van Seters (University College, Toronto, 1975) independently came to the scientific finding that, based on their study of the socio-cultural and legal background that the stories about the patriarchs, these would be in line with the early documents of the 1st millennium BC. They point to significant inconsistencies in the Bible and turn against "fundamentalists" who argue that Biblical stories could serve to preserve the history of the Middle Eastto reconstruct in a way that one does with the archives of Mari or equivalent archaeological sources, which date from these early millennia themselves. According to some, the Old Testament was not believed to exist until the 10th century BC. are in writing, others keep it on the 6th century BC.

"Abraham" is at the 10th Position in this list. 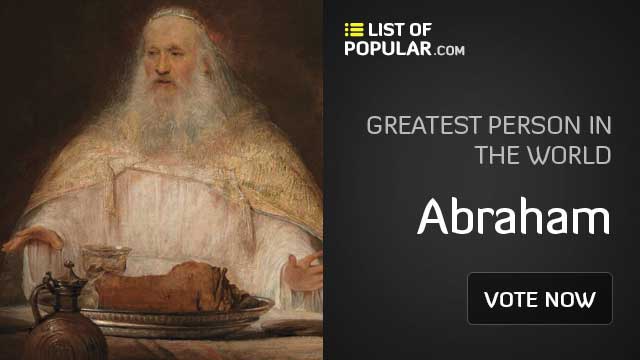