FacebookTwitterWhatsAppEmail
Sungha Jung (born September 2, 1996 in Cheongju) is a South Korean fingerstyle guitarist, who was known as an early teenager, especially through his videos on YouTube.

He started playing guitar at the age of 9. The fingerstyle he taught himself from his father and, among other things itself. After he first started with light songs and initially only reenacted compositions, he later began to arrange and compose himself. Since his increased prominence Jung occasionally collaborates with other musicians, with whom in the past also some performances took place, for example with Sérgio Mendes, Patti LaBelle and Jason Mraz. With 2NE1 he recorded acoustic versions of two of her songs.

Sungha Jung plays songs of different styles on his western guitar. He partly arranges the pieces himself, some of which he composes himself. Since September 2006 he uploads videos. The approximately 600 videos on YouTube are very successful, especially in South Korea. In September 2008, Yoko Ono shared on her blog a video guys from the Beatles song All You Need Is Love with the comment "John Lennon would have been happy that you performed his song so well." In October 2008, when Jung was twelve years old, "Pirates Of The Caribbean" was uploaded and in November 2012 had already more than 35 million views. In February 2009 he gave his first professional solo concert in Seoul. After appearances in Frankfurt and Bangkok followed in 2010 a North American tour with Trace Bundy. Jung was the first Korean who reached with his Youtube channel more than 100 million views. In June 2010, he released his first album, "Perfect Blue", which by the German musicians Ulli and Thomas Kessler was produced. In September 2011, his second album "Irony" was released. On April 15, 2013, the third album "Paint It Acoustic" came out.

He bought his first guitar from his own pocket money for $60. It was a kind of toy for him. When his father noticed his progress, he bought a better guitar, a Cort Earth900. However, this was bigger and he could not keep it comfortable, but still could play well. Sungha Jung wanted a handmade guitar for his size, which was not easy to get. The South Korean company Selma Guitar became aware of him and built it for him. This guitar became known as the signed guitar, because Thomas Leeb wrote on it, "Keep on grooving, to my friend, Thomas Leeb".

"Sungha Jung" is at the 21st Position in this list. 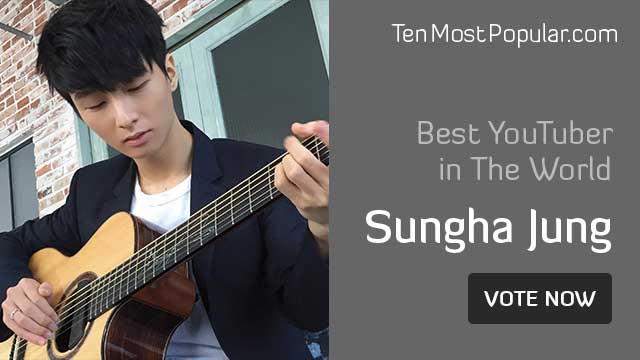