FacebookTwitterWhatsAppEmail
Philip Michael "Phil" Lester (born January 30, 1987 in Rawtenstall, Lancashire) is a British YouTube creator, vlogger and radio host. He became known through his YouTube channel AmazingPhil. Together with his best friend and roommate Dan Howell, he has been hosting the radio show Dan and Phil for BBC Radio 1 since January 2013. In addition to frequent collaboration on their own channels, both have since May 2, 2014 a common YouTube channel called DanAndPhilGAMES, On October 8, 2015, Lester and Howell released their first book, The Amazing Book Is Not On Fire.

Lester grew up in Rawtenstall, Lancashire. Together with his older brother Martyn he attended Bacup and Rawtenstall Grammar School. He graduated from the University of York with a degree in English literature and linguistics and took a postgraduate course in the Department of Theater, Film and Television. Since 2011, he lives with his best friend Dan Howell. They lived in Manchester for a year, but have lived together since 2012 in London.

Inspired by famous channels like "Lonelygirl15", Lester uploaded his first video titled "Phil's Video Blog" on his YouTube channel AmazingPhil on March 27, 2006 at the age of 19. On March 14, 2017, its main channel reached 4 million subscribers. His second channel LessAmazingPhil, which he has been operating since 2008, cracked the 1 million subscriber mark in June 2016.

In cooperation with the YouTube channel My Damn Channel Lester and Howell created the video series Super Amazing Project in which they imagined supernatural events and discussed. Already in October 2014, both declared their work on this project as finished, to dedicate themselves to the broadcast of BBC Radio 1 from now on.

In September 2014, Lester and Howell released their first video on their gaming channel, DanAndPhilGAMES, which had 2,165,000 subscribers in May 2016. Since 2015, Lester and Howell also operate a channel called DanAndPhilCRAFTS, where they upload ironic craft videos as April Fools' Jokes on April 1 of each year. In May 2016, his channel had nearly 597,000 subscribers and 3,671,000 views.

"Phil Lester" is at the 18th Position in this list. 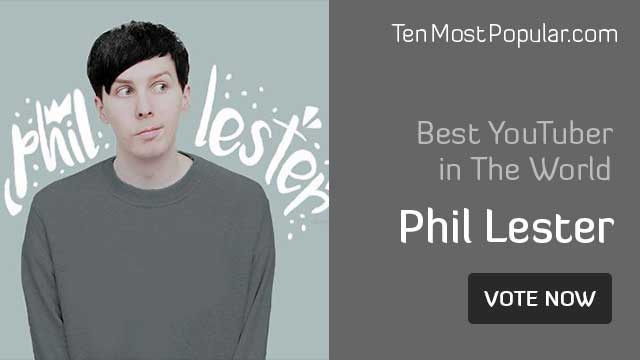