FacebookTwitterWhatsAppEmail
Steven Allan Spielberg (Cincinnati, 18 of December, 1946) is an award winning filmmaker, film producer, writer and American entrepreneur. Spielberg is the director who has more films in the list of the 100 Best Films of All Time, made by the American Film Institute. He is considered one of the most popular and influential filmmakers in the history of cinema. To date, the gross income of all its films, worldwide, is over $8.5 billion. A Forbes calculates Spielberg's wealth at $3.6 billion.

Spielberg won the Academy Award for Best Director twice for Schindler's List and Saving Private Ryan, also won the Academy Award for Best Picture for Schindler's List. His most famous works are Jaws, Close Encounters of the Third Kind, Raiders of the Lost Ark, ET the Extra-Terrestrial, Indiana Jones and the Temple of Doom, Indiana Jones and the Last Crusade, Jurassic Park, Schindler's List, Saving Private Ryan, Catch Me If You Can, War of the Worlds, Munich and Lincoln.

Steven Spielberg is the son of Jews Leah Posner Spielberg Adler, restorer and concert pianist, and Arnold Spielberg, who was an electrical engineer involved in computer development. He was born in Cincinnati, but lived most of his life in Phoenix. As a child, she went to California in the care of Zalman and Pearl Segal after her parents' separation, while her three sisters stayed with her mother in Arizona. Being the older brother of three sisters, he often used them as guinea pigs in his home movies. Like the vast majority of filmmakers, he began filming with a super-8 camera still in its infancy. Of Jewish family, Spielberg suffered prejudice, often of the own neighbors.

Like other talents in the area, Spielberg has never been an applied student. At the time of entering to the college did not obtain place in the course of cinema of University of California. He finished studying English literature at another school.

At 13 years of age Spielberg won his first short film contest with the film Fugue of Hell. The film lasted 40 minutes and portrayed facts about war. At 16 he made his first Super-8 movie, called Firelight, which was shown in a local theater room that had been rented by his father. In the same year, 1963, he made his professional debut with the short film Amblin, which tells the story of a couple of young people in the Mojave Desert. This short film lasted 24 minutes, was shown at the Atlanta Film Festival and was awarded at major festivals such as the Venice Film Festival. At that time, the young and award-winning filmmaker decided to pursue a career and tried to enter the University of Southern California's renowned film department where he was not accepted, going to study at California State University where he made five films.

He is married to actress Kate Capshaw. He has six children, one of them with his ex-wife, the also actress Amy Irving. Capshaw starred in the movie Indiana Jones and the Temple of Doom, a Spielberg movie.

In early 2006 Spielberg sold DreamWorks to Paramount Studio, but remained as its chief executive. In September 2008, DreamWorks, Viacom Inc. and Universal Pictures were charged with copyright infringement and a breach of contract for producing Paranoia without the permission of plot owners, according to the suit, Spielberg, founder of Dreamworks, is cited as defendant. The film earned about $80 million at the North American box office.

According to the process, filed by the Sheldon Abend Revocable Trust, the base film Hitchcock (Rear Window) was Killing of a window, tale Cornell Woolrich. Hitchcock and the actor James Stewart obtained the rights of adaptation of the story for the cinemas in 1953. The process claims that DreamWorks should have done the same.

"Steven Spielberg" is at the 15th Position in this list. 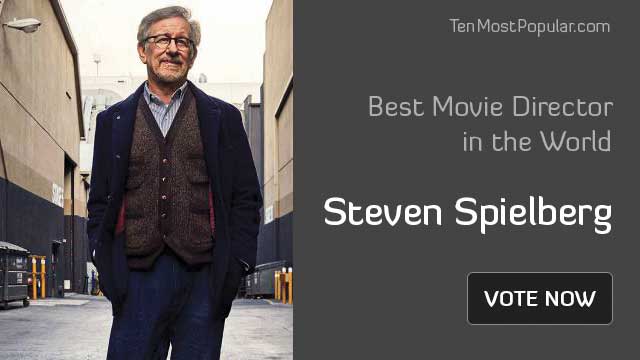