Daryush Shokof (born June 25, 1954 in Tehran as Ali Reza Shokoufandeh) is an Iranian philosopher, artist, independent filmmaker and writer who lives in Germany.

Daryush Shokof immigrated to the United States in 1979. In the 1980s he studied physics and mathematics. He also studied at the New York Film Academy. In 1981 he took part in an art exhibition for the first time. This took place in the New York gallery Gorky. He had the first exhibition in Europe at the March gallery in Cologne.

Between 1981 and 2003 Shokof painted pictures which he was able to show in around 60 exhibitions worldwide. 20 solo and about 40 group exhibitions, including with Andy Warhol, Bruce Nauman, Jeff Koons, Chuck Close, Roy Lichtenstein, Ed Ruscha, Jim Dine, Robert Mapplethorpe, Louise Bourgeois, Rodney Graham, Heim Steinbach and John Chamberlain. His last retrospective with more than 100 paintings by Daryush Shokof was at Galerie 360 Degrees, a project by L'art Visit, in the building of the former Royal Railway Directorate 2003 in Berlin.

In 1990 he made his first experimental short film "Angels are Wired" in Prague. After a few more short films, he made his debut film "Seven Servants" with Anthony Quinn. The film was nominated for the Golden Leopard at the Locarno Film Festival in 1996 and won awards at other festivals such as Berlin, St. Petersburg, Toronto and Montreal. His film "Venussian Tabutasco" was founded in 2004 as part of the second Berlin Asia-Pacific Film Festival premiere (BAPFF) as a world premiere.

To date, Shokof has produced and directed eight feature films and more than ten short films. His film dramas "Hitler's Grave" and "Iran Zendan" were released in 2010.

On May 24, 2010, Shokof disappeared at Cologne Central Station, where he wanted to board a train to Paris. On June 5, 2010, he was at the Cologne Rhine discovered by passers-by. He said he had been kidnapped by four Arabic- speaking people who had locked him up and drugged him. After completion of the investigation informed the competent prosecutor Cologne in March 2011 that inconsistencies in the information Shokofs serious doubts about the alleged instances of kidnapping have raised. So there are no traces of drugs in the intensive forensic medical examinations or the like has been found at Shokof. The prosecutor refrained from filing a criminal complaint for simulating a crime.

"Daryush Shokof" is at the 1st Position in this list. 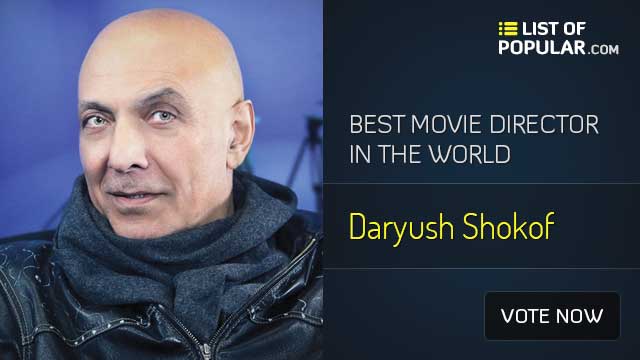 Total Votes: 310
Votes received:96
Up votes:95
Down votes:1
45.24% Popularity
99% Up votes
1% Down votes
Go to voting page
Comments on Daryush Shokof
Submit
Cancel
28 Comments
knock out originality
4
0
Reply
You would never see an Iranian in this position simply because all Iranian directors were hailed as Filmmakers to remedy fanaticism of religion. Without an exception all of them . Not even one is a world class FREE minded artist. They simply are not winning prizes for being brilliant Filmmaker or advanced artists but simply political comment makes. This guy is all about arts incredible visionary mind and originality. The only one from Iran which is also really the only one alone in this regard worldwide. I can't compare anyone to him though he even made himself politically known to the world by having made 2 most important political films as well; Hitlers grave and Iran Zendan
4
0
Reply
odd man out. why?! his films will stay after all movies have been made and seen and forgotten
3
0
Reply
Far off. One refreshing mind with amazing ideas and brilliant techniques of making his movies stand atop. I agree Shokof is a wide apart kind of artist who makes equally wide apart movies ahead of what is main stream but interesting enough his films linger on one's mind for all their originality FOREVER
3
0
Reply
most original mind
3
0
Reply
he proved money is not any viable reason for excellence in the arts, thoughts, philosophy and cinema. He has made over 20 films with which he educated the world of cinema in 20 different ways how not to be business as usual. Many great filmmakers learned. Many are still learning.
2
0
Reply
the most original mind on planet today
2
0
Reply
please next film.
1
0
Reply
a real mindblowing brain. maximalist at its best.never bound to limits and yet most original.
1
0
Reply
because he is not just a director. he changed a lot of how we changed in last 40 years. globally. also in cinema with his amenic filmmaking methods. he deserves to be here. whoever did this ranking knows.
1
0
Reply
there could be perhaps 6 people in the whole planet that have his visions, fantasies and ideas but none are filmmakers, so i would say he is exactly in the right position in this right ranking.
1
0
Reply
not just a filmmaker ,but lots more
1
0
Reply
movies cqhnged forever with his movies. simple. Originalest on the planet
0
0
Reply
strange but true that none of his films were ever publicly screened, and he still gets to be in this position?! However; i for one saw atleast è films by shokof and easily agree he is the most original in whatever he does. tHAT IS WHAT EVERYONE KNOWS WHO KNEWS ABOUT ARTS AND CINEMA. He is unmatched.Even as a philosopher
0
0
Reply
up,up,up, up there andddddddd still flying
0
0
Reply
find another who has simply achieved what he has regardless of movies, arts and or..............................creativity, originality...........................
0
0
Reply
not ordinary. extraordinary
0
0
Reply
bravado for being out of this worldado
0
0
Reply
not from this planet
0
0
Reply
never mind why- he just is. way beyond
0
0
Reply
boundless, fearless, and fun.
0
0
Reply
doubtlessly uinquest
0
0
Reply
Amazing work , cant wait to work together in the future.
0
0
Reply
delightfully unusual. surprise element out of this planet
0
0
Reply
raging poetic extraordinary funny and unlimited.
0
0
Reply
even more entertaining than hitchcock
0
0
Reply
original, influential, imitless. all good reason for being here
0
0
Reply
not ordinary.
0
0
Reply