Dracula still operates his hotel Transylvania with his daughter Mavis and son-in-law Johnny. He is sad, however, since he has always been single since the death of his wife Martha. To cheer him up, Mavis books a cruise for them all. Dracula immediately falls in love with human Ericka, who is the captain of the cruise ship. However, it turns out that Ericka is the granddaughter of Abraham Van Helsing, the archenemy of Dracula. Van Helsing hides on the ship and plans, with the help of mysterious equipment, to bring down Dracula and his friends as soon as the ship runs into the harbor in the lost city of Atlantis.

During the cruise Dracula tries again and again to approach Ericka, because he knows nothing of their relationship to Van Helsing. This is initially still in league with her great-grandfather and tried many times unsuccessfully to kill Dracula. Over time, however, she also falls in love with Dracula. When the ship finally enters Atlantis, which has since been converted into a huge casino, Dracula Ericka admits his love, but is rejected by her.

Ericka holds on Atlantis a mysterious object, which is named only as an instrument of destruction and brings it to Van Helsing. He uses it to summon a giant kraken that attacks Dracula and his friends. Ericka, however, decides at the last moment for Dracula and saves his life. She asks Van Helsing to leave him and the other monsters alone, but he continues his attacks and now has Ericka on the target.

To placate the Kraken, Johnny plays encouraging songs on a mobile DJ console. After he also plays the song Macarena, the Kraken calm down and leaves the monsters in peace. All guests on the boat celebrate and start dancing, and even Van Helsing cannot help himself. As he almost falls down while dancing, Dracula catches him. Van Helsing is touched and apologizes to the monsters.

Back at the Hotel Transylvania, Dracula makes a marriage proposal, which she accepts.

The music in the film is by Mark Mothersbaugh, while the Dutch DJ Tiësto also contributed some compositions. The film was released on July 13, 2018 in the United States and on July 16, 2018 in Germany.

Critics gave the film mixed reviews. On Rotten Tomatoes they were able to convince 60% of critics and received on Metacritic Metascore of 54 out of 100 points. The consensus on Rotten Tomatoes is that the film delivers exactly what the fans expect. This meant 97 minutes full of fast-paced gags and colorful animation.

The big point of criticism, however, is still the over-predictable as well as little-touching plot, which "while holding some dynamic-fun episodes, their emotional beats treated but astonishingly step-motherly," said Diekhaus. The Schausplatzwechsel could have offered exciting and unknown worlds, but one did not proceed imaginative or animatorisch outstanding. On a positive note, Hotel Transylvania 3 - A monster holiday For the most part, they did without "exaggerated hectic action scenes", which later led to the fact that the spectacular-heavy showdown was even more superfluous. Likewise praised is the beginning, full of wonderfully weird ideas and funny details. In conclusion, Diekhaus, the film is about "cinematic fast food, to which one wasted just a few thoughts shortly after eating".

Andreas Staben of film starts joins Diekhaus and says that the film convince precisely in the moments in which the action does not matter. However, Staben finds that the balance between relaxed entertainment and exciting variety is quite good due to the change of scene. The numerous visual and ingenious jokes can score points, with director Genndy Tartakovsky "his lusts for the Abgefahren-Überdrehten here even more free rein." Apart from "sympathetic tolerance message and some original loosening up" the film put however also on less successful elements, why some lengths would develop particularly in the middle of the film.

"Hotel Transylvania 3: Summer Vacation" is at the 7th Position in this list. 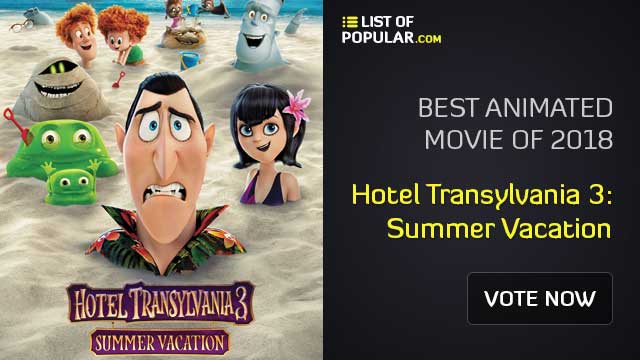