Old McDonald Had a Farm

The first Finnish recording of the song was made by Cooers Cow in 1952. The best-known version has been recorded by Reino Helismaa on February 17, 1952, and according to the Sound Record Database, Helismaa would have made Finnish words, but there are several lyrics in different names versions.

The origin of the song is unclear. The first credible record is in the 1917 Frederick Thomas Nettleingham songbook. There the farmer's name is McDougal, and the farm is in Ohio (the ee-i-ee-io acoustic constant may have been garbled). The roots are seen in the song of the English composer Tom Durfey from 1720, which reads one verse "Boo here and boo there and boo everywhere". The first surviving recording of Old MacDonald's Snake and Farm was made by country violinist and singer Gid Tanner for Columbia Records in 1927. Since then, many well-known performers such as Frank Sinatra, Elvis Presley, Ella Fitzgerald, Kelly Family or Nikki Yanoff.

The song was later interpreted by the Piccolo Coro dell'Antoniano.

The classic version of the Cetra Quartet was also used as the theme song of the homonymous transmission conducted by Giorgio Celli and broadcast on Rai from 17 June to 2 September 1991.

The piece is characterized by a simple and linear melodic line. The structure of the piece is similar to that of many folk songs and nursery rhymes, with a series of accompanied strophes which, during their enunciation, take up part of the previous stanzas, becoming increasingly longer and often difficult to remember.

In the usual version sung today, the lyrics take into account an animal being interchangeable and sound each.

For example, one function uses a cow as an animal, and moo as a cow sound will:

The first known version of the song according to the Traditional Ballad Index is the one reported in the book "Tommy's Tunes" of 1917, a collection of songs from the First World War by FT Nettleingham. In this book the rhyme is reported with the title "Ohio (Old Macdougal Had a Farm)", and has a very similar text though with a slightly different refrain.

The first official recording of the song with the title and current text is by the Sam Patterson Trio, published by the Edison record label in 1925. This was followed by the version by Gid Tanner & His Skillet Lickers, (Columbia Records, 1927) and "McDonald's Farm" by Warren Caplinger's Cumberland Mountain Entertainers (Brunswick Records, 1928). The new text of the song, which from then on will become the standard one.

The song Menti brulicanti, theme song of the television program by Antonio Ricci of Canale 5 Striscia the news of the 2004-2005 period interpreted by Gabibbo, makes a crippling several times of the song of the Quartetto Cetra saying ia-ia-io.

"Old McDonald Had a Farm" is at the 1st Position in this list. 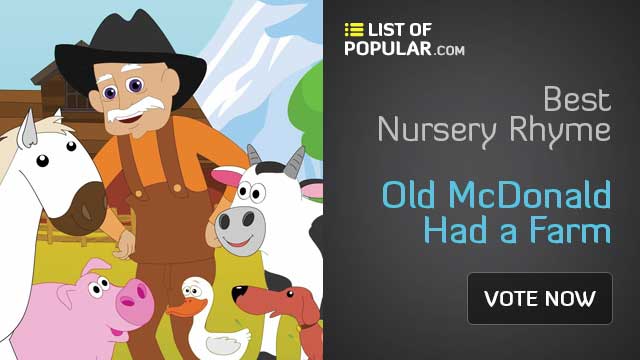