FacebookTwitterWhatsAppEmail
BMW (an abbreviation for Bayerische Motoren Werke, or in English, Bavarian Motor Works), is a German automotive company that produces cars and motorbikes. BMW was founded in 1916 by Franz Josef Popp. BMW AG is the parent company of MINI and Rolls-Royce car brands formerly Rover. BMW is known as one of the high-performance luxury car companies, and also one of the first car companies to use ABS technology.

BMW started its business after a restructuring from the 1917 aircraft engine manufacturer Rapp Motorenwerke. The end of World War I in 1918, BMW was forced to stop producing aircraft engines because of the Versailles Agreement. The company switched to producing motorbikes in 1923 after the agreement was relaxed, and began producing cars in 1928/29.

In 1992, BMW acquired an industrial design studio company Design works in California USA, and acquired it in 1995. In 1994, BMW purchased the British automotive company Rover Group (at which time there were brands of Rover, Land Rover and MG as well as rights to brands which are no longer manufactured, namely Austin and Morris) and have them for 6 years. In 2000, Rover suffered heavy losses and BMW sold it. MG and Rover brands were sold to Phoenix Consortium to form MG Rover, while Land Rover was taken over by Ford. BMW finally established its own brand which he named MINI, which was launched in 2001.

"BMW" is at the 1st Position in this list. 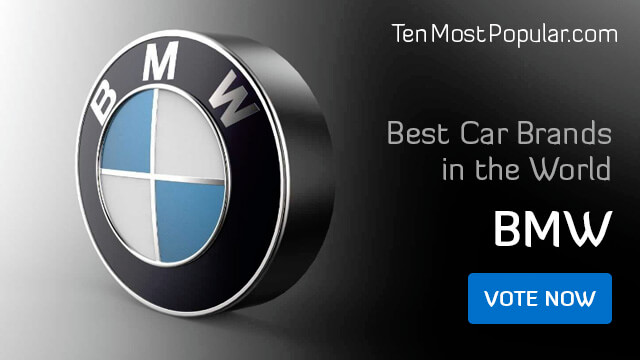