mallpox or variola was an extremely contagious and life-threatening virus that has plagued mankind for centuries. For example, in the last three thousand years one in ten people have died of smallpox virus. Those who survived an epidemic often had sufficient defense afterwards, but contact with new nations could then be disastrous, as was the case in America through the Colombian exchange.

The disease was caused by the smallpox virus. There are two types: the less dangerous Variola minor and the usually deadly Variola major in non-vaccinated people. There are also various related animal viruses, in particular the cowpox virus, which causes vaccinia (cowpox). Going through cow pox gives a person protection against smallpox. So people could protect themselves against this through deliberate infection with cowpox, the term vaccination is therefore derived from the Latin word vacca (cow).

Since the second half of the 1970s, the disease has not been prevented due to an extensive worldwide vaccination campaign. Smallpox was the first virus eradicated by modern science, and also the only one, until the rinderpest was declared on October 14, 2010.

This was only possible because:

The genetic structure of the smallpox virus is now fully known and appears to be very scientifically interesting when studied. The virus is still being preserved in some laboratories. The last known case of smallpox in the world occurred in England in September 1978, when Janet Parker, a photographer at the University of Birmingham medical faculty, contracted the disease and died of it. A smallpox research project was going on in that building at that time. The exact contamination route has never been found. A few years before that, in 1972, the last epidemic of wild pox in Europe occurred in Yugoslavia.

Smallpox was epidemic and killed large numbers of victims in the Middle Ages and beyond. The disease was a major cause of death, around 30% of infected people died from it, including various monarchs. Joseph Stalin contracted the disease in his youth and had the scars left on photos retouched. George Washington, Abraham Lincoln and Emperor Kangxi of China have also had the disease. The disease was characterized by a high fever and large numbers of blisters on the skin, which, unlike chickenpox, were concentrated mainly on the limbs.

One could say that smallpox has radically influenced history. The Spaniards could easily take possession of the Aztec and Inca kingdoms because the Spanish conquerors were accompanied by smallpox, thereby decimating the Indian population, who had no resistance whatsoever. When Hernán Cortés landed on the Mexican coast, he fought a rival army of conquistadors, which contained an infected soldier. This soldier infected one of Cortés' own soldiers. The soldier died when Cortés' army left Tenochtitlan had to fight, but in the skirmish the Aztecs became infected. When the city fell a year later, a huge epidemic had occurred that had killed most of the population. The survivors were too weak to defend themselves.

After the fall of Tenochtitlan in 1521, the virus moved south to the Inca Empire. The Incakeizer Huayna Capac became infected and died of the disease, which broke out a civil war between his sons Atahualpa and Huascar. In the meantime, smallpox spread at a record pace via the advanced road network. Smallpox and civil war further weakened the Incas so that Francisco Pizarro could repeat Cortés' stunt, in 1533 he conquered the Inca Empire with a tiny army.

The subsequent smallpox epidemics continued to plague the indigenous population. 60 to 90% of the Inca population died of smallpox and entire areas became depopulated. Due to other diseases and secondary causes such as faminea large proportion of the people who had survived smallpox died. The virus also spread to North America, which was also hit hard. The urban network around the Mississippi was destroyed by the disease before even a single European had entered the area: so many people died that the remaining inhabitants left the cities and adopted a nomadic lifestyle. This allowed Europeans to maintain their strength despite their smaller numbers, but they had to import slaves from Africa to work on the plantations. Eventually this led to the fact that the current American population is for the most part either of European or African origin.

As mentioned earlier, there are two types of smallpox viruses, Variola minor and Variola major. There are also several variants of the latter form. In most cases, the course of the disease was as follows: after the infection, the virus migrated via the respiratory organs to the lymph nodes, where it multiplied. In this initial phase, the virus invaded the cells, after which lysis took place after approximately 12 days: the infected cells were massively destroyed. The virus was released into the blood and multiplied a second time, now in the bone marrow, spleen and lymph nodes. Around this time the infected person became ill. The first symptoms were those of a severe flu : muscle and joint pain, fatigue and high fever (at least 38.5 degrees), nausea and vomiting. The patient was the most contagious in this initial phase of the disease.

After this phase the virus attacked the skin cells and around day 12-15 a rash emerged, starting on the forehead and covering the entire body for the following 24-36 hours. Often this was accompanied by a temporary reduction of the fever and a revival of the patient. In a normal Variola major case, the rash developed into vesicles filled with a turbid pus-like fluid. However, this was not a real pus, but destroyed skin tissue. The blisters felt firm and were slightly raised in relation to the skin. Sometimes they contain a central slump that looked a bit like a small navel. In this phase the fever often rose again and the patient felt sicker again.

During the second week of illness, the blisters slowly emptied and dried out, leaving scabs. These scabs fell off and left scars. From that moment on, the patient was no longer contagious and often also symptom-free.

The mortality of the normal type was around 10%.

Sometimes the blisters grew in contact with each other and merged into larger slices, separating large pieces of epidermis from the dermis. The patient continued to feel sick for longer, even after the rash disappeared. The risk of death was much greater (up to around 60%). If large areas of skin were destroyed, this had to be treated in the same way as is necessary for second-degree burns.

Modified Variola major arose when an already vaccinated person became infected. This person did fall ill, but the course of the disease was much milder. The fever was lower and the rash less severe. This variant was sometimes confused with chickenpox or another harmless infection, which could be a fatal mistake. Not for the patient himself (this type was rarely fatal), but for any unvaccinated people in his environment.

Flat- type Variola major usually occurred in children who became infected. Due to an unknown cause, these patients developed a significantly more serious course of the disease. The first symptoms were more severe and the fever significantly higher, with the patient developing toxemia. Blisters formed that were not firm, but felt soft, contained little liquid and could contain internal bleeding. The blisters also did not protrude above the skin, but were more or less sunk into it. The mortality was very high: 96%.

Sometimes, in around 2% of cases, a patient developed the haemorrhagic form of Variola major. In that case there were no blisters, but internal bleeding on the inside of the skin. The skin therefore turned black, which has given this type the nickname 'black pox'. Various other organs also started to show internal bleeding, in particular the spleen, kidneys and muscles. The epicardium, the testes, the liver and the bladder could also be affected. The patient suffered from platelet, thrombin and globulin deficiency. The patient usually died suddenly around the fifth to seventh days of the disease. Thrombocytopenia could occur at a later stage, but most patients did not reach this stage and had already died. The hemorrhagic form had a mortality rate of almost 100%: it was therefore almost always fatal.

An attack of smallpox sometimes led to complications. Usually these were respiratory infections such as bronchitis or pneumonia. In some cases, the skin became infected. In these cases, the fever remained high. Another complication described is encephalitis. When blisters formed on the eye, this could lead to blindness. The blisters almost always left unsightly scars.

Treatment of smallpox was supportive, there was no real cure for smallpox. The only real treatment against smallpox was preventive vaccination with the cowpox virus, which made defense against the smallpox virus. In many cases, however, vaccination led to side effects, which in some cases even ended fatally. This outweighed the risk of actually getting the disease.

During the Second World War, Japan, the United States and the United Kingdom investigated the possibilities of using smallpox as a biological weapon. During the Cold War, the United States and the Soviet Union in particular explored the possibilities of this. Certainly after stopping the vaccinations, the disease could in theory cause great damage to an unvaccinated population. The downside, however, was that the own population was also not vaccinated.

On the island of Vozrozhdeniya in the Aral Sea there is an old laboratory that has been used for the development of bioweapons, including smallpox. In the seventies would have been a minor epidemic because a woman had touched plankton was infected with smallpox from the laboratory. Due to the drying up of the lake, the island has grown solid on the mainland and people and animals can reach it. Although there are probably no more samples of the smallpox virus, the island was still contaminated with other diseases, particularly anthrax. Ten underground anthrax storage sites have now been completely cleaned and 100-200 tones of anthrax bacterial waste have been removed. It is not clear how much waste has been left on the island. It is likely that the island floor is still contaminated.

Recently, smallpox again been in the spotlight as a possible agent for an attack with biological weapons by terrorists. The question of whether the last cultures should be destroyed or not is now less relevant because it will probably be possible to make the virus in the foreseeable future, even if it is no longer stored anywhere.

"Smallpox" is at the 40th Position in this list. 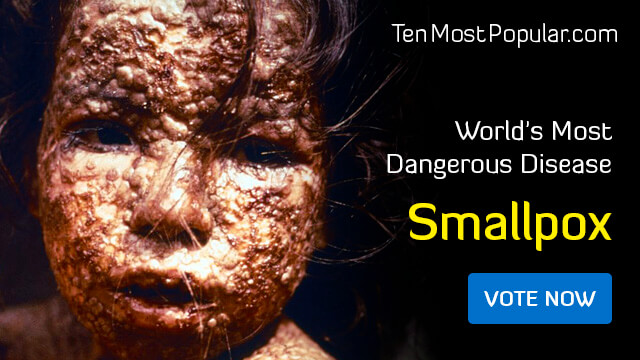