Transmissible spongiform encephalopathy (TSE) is the name for a series of brain diseases (encephalopathy), in which there is a spongy change in the brain tissue. Diseases are found in both humans and animals. Prions are assumed to be the cause (hence the name prion disease). The TSE are among the protein misfolding diseases. TSEs are always fatal, so far there are no therapeutic options.

The causative agent of these diseases is prions, an exceptional class of infectious agents of a protein nature, which do not contain nucleic acids in their structure and thus differ from other pathogens of infectious diseases.

To date, it has been found that, in addition to the short-lived proteins that the body uses as an energy resource and as building material for new cells, there are proteins that have quite different, and still largely unexplained, functions. They are associated with the emergence of slow prion infections. Based on the fact that these diseases are infectious in nature and the infectious agent is transmitted from the source to the susceptible organism, WHO experts use the term pathogen in relation to prions.

It is suggested that pathogenic prions are related to the cause of some other human diseases: chronic progressive childhood encephalopathy/Alpers disease, spongiform myositis with prion-associated inclusions. Amyloid changes and clusters of normal prions are found in the tissues, although pathogenic prions have not yet been found.

In 1920, the German neurologist GG Kreuzfeld and in 1921 another German neurologist A. Jacob independently described the symptoms of the disease, which was later recognized as the first prion disease of the person, was named after their surnames and was subsequently added to list of prion diseases. In 1954, the Icelandic scientist Byrne Sigurdsson presented the results of his many years of research on scrapie - diseases of sheep in Iceland, which were manifested by impaired movement coordination, paralysis, an intolerable itch and always ended in death, first referred them to a group of slow infections and drew attention to such ailments with a characteristic pathomorphological substrate - spongiform encephalopathy. For many years, American virologist Carlton Hayduszek studied mysterious chicken pox and in 1965 informed the medical community that it was infectious and had managed to prove it. In 1982, the American biochemist Stanley Prussiner successfully proved that the biological structural basis of the so-called "undetectable transmissible agent" of scrapie is the pathological (infectious) isoform of the cellular protein P (or Prrsc). Scientist has created a new term "prion" (using a combination of letters from English. proteinaceous infectious particles ("proteinaceous infectious particles") in order to emphasize the specificity of the infectious agent, which is fundamentally different from viruses and viroids in their biological characteristics.

The urgency of the problem of prion diseases is due to the fact that they are extremely dangerous for human and animal life. These ailments are found in all countries of the world, and the agents of scrapie and cow rabies from the UK have been imported to a number of countries in Europe, the Middle East, Asia. Modern quarantine measures to eliminate epizootic are time consuming, cause enormous economic damage to agriculture, and have a negative impact on the social situation. Two researchers on the problem of prion diseases - K. Gaydusek (1976) and S. Pruziner (1997) were awarded the Nobel Prize in Medicine.

Pathogenic pathogens are prion isoforms and modified host protein molecules that do not have nucleic acid but are characterized by pathogenic pathogens. Prions consist only of altered (conformational) protein molecules. The absence of nucleic acids in the prions determines the unusual nature of some of the properties. They are very stable in the environment - from all living prions die last: withstand boiling for 30-60 minutes, drying, freezing, ultraviolet and gamma irradiation, chemical treatment with alcohols, formaldehyde, acids, are not hydrolyzed by enzymes. The gene that encodes the prion protein is not contained in the prion but in the cell. Prion protein, when introduced into the body, activates this PrNP gene and causes the induction of synthesis of a similar protein. However, prions, for all their structural and biological origin, have a number of properties of ordinary viruses (virions). They pass through bacterial filters multiply on artificial medium, reprodukuyutsya concentration to 10 -10 per 1 g of brain tissue, adapted to the new owner, alter pathogenicity and virulence, reproduce the phenomenon of interference, characterized shtamovymy differences ability to persistencein the cell culture obtained from the organs of the infected organism can be cloned.

The mechanism and factors of transmission

A vertical pathway through the placenta is also possible. Of particular epidemic danger is the form of the course of slow infections (for example, with scrapes, cow disease, etc.), in which latent virus-bearing and typical morphological changes in the body are asymptomatic. Prion transfer is possible in the case of the consumption of cut meat of diseased animals or, more commonly, those that were in the incubation period when they have no symptoms of the disease, as well as during the opening of dead animals. Given the high thermal resistance of prions, conventional cooked cooking of meat does not eliminate the pathogen. Infection can also occur with parenteral administration of hormones made from organs of infected animals (pituitrin) or humans (gonadotropin). Slaughter workers are also at risk of infection, m' combines during slaughter of animals in the incubation period and contact with their tissues and organs. Features of the epidemic process among consumers of meat of infected animals have not been sufficiently studied, and the very fact of infection of humans from cows was proved only in the early 90s of XX century.

Particularly vulnerable are recipients of transplantation of internal organs, those who undergo various medical manipulations, in which devices or mechanisms can be contaminated with the tissues of infected donors, recipients of some medicines containing hormones, veterinary and medical surgeons, pathomorphologists, pathomorphologists wood processing industry, etc. Immunity due to disease is not produced, prion diseases always end in death.

Routine paraclinical methods are little-informative. Serious diagnostic support is provided by CNS MRI. It shows hyperintense signals in the cerebral cortex, basal ganglia and thalamus. The characteristic changes in the form of a "hockey stick" are described - an increase in the intensity of the signal in the shell and the center of the caudal body resembles this object. Just as characteristic is the symptom of "honeycombs" - corresponding to the picture of an increase in signal intensity in the thalamus.

One of the rather sensitive specific express methods for the diagnosis of prion diseases is lymph node biopsy and Congo-red staining to detect amyloidosis. In the presence of amyloidosis, it is possible to experimentally infect monkeys or mice with a suspension prepared from the brain or lymph nodes taken from deceased humans or animals. From 4-14 weeks disease prions can be found in the spinal cord, brain and other organs. Prion can be detected in the biopsy of the pharyngeal tonsil, as well as in a brain biopsy with immunohistochemical typing of proteins. Histopathological examination of the CNS results in spongiosis with the vacuolation of neurons, astrocyte and glial proliferation without signs of inflammation and demyelination, amyloid prion protein plaques. In the case of prion-associated myositis with inclusions histologically revealed necrotic myopathy with the presence of vacuoles, which in frozen sections contain spiral convolutional filaments.

Effective etiotropic and pathogenetic therapy for prion diseases has not been developed. In the early stages use symptomatic remedies to correct behavior disorders, sleep disorders and myoclonia (amphetamines, barbiturates, antidepressants, benzodiazepines, other neuroleptics), in later - supportive therapy.

It is suggested that drugs that bind and stabilize the structure of the cellular prion isoform may reduce prion expression and delay the onset of disease. The search for chemical agents that would destabilize the structure of pathological prion isoforms. Chemical effects on endocytosis, exocytosis, intracellular transport, and specific prion destruction may also be effective. However, the prognosis for prion infections is still unfavorable.

There are no specific prevention tools. When working with patients during invasive procedures, as well as in contact with their biological fluids, it is necessary to observe the rules provided for the work with a pathogen of a special degree of danger (as with HIV), using special protective clothing (gloves with a metal layer, mask, protective glasses, apron). This also applies to persons who are in contact with potentially potential sources of infectious prions and are at risk (veterinary and medical surgeons, pathomorphologists, veterinarians, meat processing workers, etc.). Corpse deaths of prion diseases should be cremated.

The three most realistic methods of disinfecting medical instruments contaminated with prions are:

In infectious animal amyloidoses, epizootic surveillance is of utmost importance, which includes the prevention of the introduction of a pathogen with imported infected animals, with natural meat and even culinary processed meat products. In order to limit the spread of the pathogen among animals, it is necessary to identify the patients as soon as possible and to destroy (with immediate cremation) not only them but also all the flock in which the animal was sick. Protein concentrates of animal origin are strictly forbidden. Another way to prevent prion diseases is to breed pets that are genetically resistant to prions.

"Prion Diseases" is at the 2nd Position in this list. 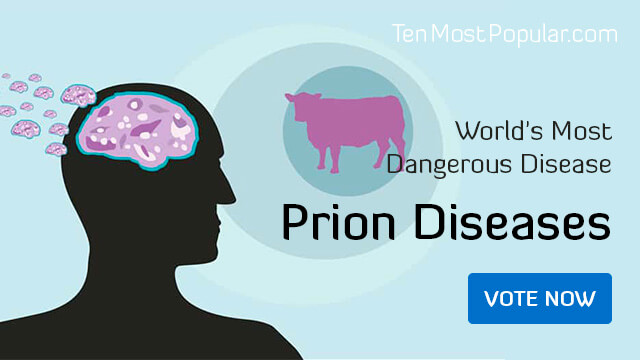