FacebookTwitterWhatsAppEmail
Huntington's disease, chorea Hunting or Cairo chore is a disease that attacks the nerves. this disease is caused by genetic factors, so it can be inherited from parents to their children. this disease affects about 1 in 20,000 people in Western Europe and 1 in 30,000 in the United States. The name of this disease was taken from George Huntington who first explained it in 1872. The gene of this disease is dominant so that children of parents who suffer from this disease have a greater chance of suffering from "Huntington" disease which is 50%. Until now there is no medicine that can cure this disease but only in the form of reducing symptoms and controlling the behavior of patients.

Symptoms of this disease appear at every age, but on average at the age of 35-44. In the early stages the sufferer will experience poor memory, do abnormal movements which will gradually become clearer and thus affect normal activities such as eating, dressing and sitting quietly. The following is a summary of the symptoms:-

Physical symptoms:- Unconscious movement of fingers, legs and face, To canggungan, Loss of balance or coordination, Slurred speech, Clench the jaws or teeth of the grinder, Difficulty eating, Stumbling or falling, Difficulty writing.

Emotional Symptoms:- Hostility, Lack of energy, No interest in life, Depression. In further development this disease can cause hallucinations, without reason for aggression and paranoia.

"Huntington's Disease" is at the 27th Position in this list. 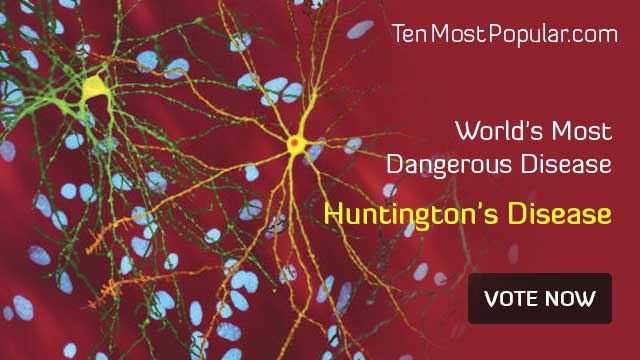