The virus itself is called the Human Immunodeficiency Virus (HIV) which is a virus that weakens immunity in the human body. People affected by this virus will become susceptible to opportunistic infections or easily exposed to tumors. Although existing treatments can slow down the progression of the virus, but this disease cannot really be cured.

Scientists generally think that AIDS comes from Sub-Saharan Africa. AIDS has now become an epidemic. AIDS is estimated to have infected 38.6 million people worldwide. In January 2006, UNAIDS in collaboration with WHO estimated that AIDS had caused the deaths of more than 25 million people since it was first recognized on June 5, 1981. Thus, this disease is one of the deadliest outbreaks in history. AIDS is claimed to have caused 2.4 to 3.3 million deaths in 2005 only, and more than 570,000 of them are children. One third of these deaths occur in Sub-Saharan Africa, thus slowing economic growth and destroying the power of human resources there. Antiretroviral treatment can actually reduce mortality and severity of HIV infection, but access to treatment is not available in all countries.

"AIDS/HIV Infection" is at the 4th Position in this list. 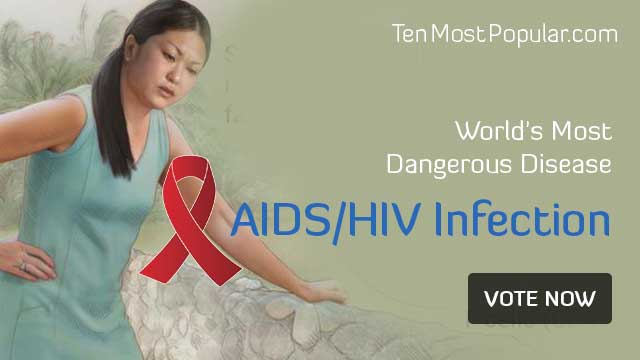