FacebookTwitterWhatsAppEmail
African trypanosomiasis or sleep disease is a parasitic disease of humans and other animals. This is caused by the parasite of the Trypanosoma brucei species. There are two types of parasites that infect humans, Trypanosoma brucei gambiense (TBG) and Trypanosoma brucei rhodesiense (TBR). Tuberculosis causes more than 98% of reported cases. Both are usually transmitted through the bite of infected tsetse flies and are most common in rural areas.

Symptoms of the first stage of this disease are patients with fever, headache, itching, and joint pain. These symptoms begin about one to three weeks after the patient is bitten by the tsetse fly. A few weeks to a few months later, the second stage starts with signs of confusion, weak coordination of the limbs, numbness and insomnia. Diagnosis of this disease can be detected by parasites in the removal of peripheral blood or in the spleen node fluid. Lumbar puncture is often needed to distinguish between the first and second stages.

Prevention of severe diseases is done through screening of at-risk populations through blood tests for TB. Treatment is easier if the disease is detected earlier and before neurological symptoms occur. The first stage of treatment is using the drug pentamidine or suramin. The second stage of treatment uses eflornitin or a combination of nifurtimox and eflornitin for TBG. Although melarsoprol works for both stages, it is usually only used for TB because of serious side effects.

The disease occurs routinely in a number of Sub-Saharan African regions, with populations at risk of contracting about 70 million people in 36 countries. Since 2010, the disease has caused around 9,000 deaths, lower than 1990, which was 34,000 deaths. Currently, approximately 30,000 people are infected, with 7,000 new cases of infection in 2012. More than 80% of these cases occur in the Democratic Republic of Congo. The three largest outbreak events have occurred in history: one case from 1896 to 1906 occurred mainly in Uganda and the Congo Basinand two cases in 1920 and 1970 in several countries in Africa. Other animals, such as cattle, can carry disease and get infections.

"African Trypanosomiasis" is at the 9th Position in this list. 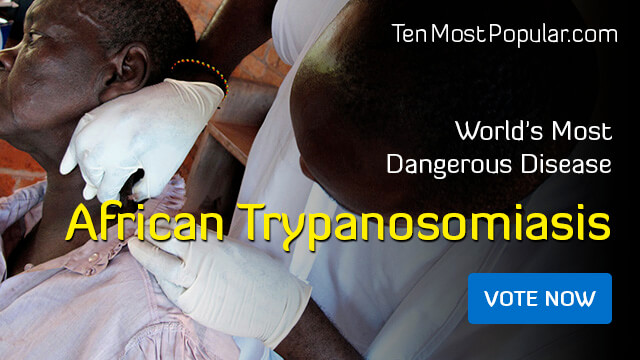