Know more about Spanish - Español language: history, origin and number of speakers in the World

Spanish (español) or Castilian (Spanish: castellano) is a Romance language and, in terms of native speakers, the most spoken language in the world after Mandarin. For 406 million people, Spanish is the native language, while another 180 million speak Spanish as a second language.

The historical origin of the language is in Spain, but most native speakers are nowadays in Latin America. In Spain itself, other Romance languages ​​are spoken in addition to the regional variants of Spanish: Galician, Catalan, Astur-Leonees, Aragonese and Aranees. The Basque, which is spoken in a small part of northern Spain, no romance and even Indo-European language.

In Spanish itself there are two names for the language that are each other's synonyms: español (Spanish) and castellano (Castilian). The second name goes back to the fact that Spanish was the language of the Kingdom of Castile during the Middle Ages. Today, the name español is used the most, primarily in Latin America, but also in Spain. According to official authorities, this name is also preferred. In most of South America and parts of Spain where another language is also spoken, the term castellano is more common.

According to the Real Academia Española, the term castellano is preferred when it comes to the language of the medieval kingdom of Castile or to the dialect of present-day Castile. The word is further used to designate the national language of Spain in relation to the languages ​​that have an official status in addition to Spanish in their respective regions. In practice this concerns Catalonia, Valencia and the Balearic Islands, where (variants of) Catalan is spoken, the Basque country where Basque is spoken, and Galicia where Galician is spoken. The Spanish constitution of 1978 also indicates the language with castellano and not with español.

In Dutch the language is referred to as Spanish, although Castilian also exists as a name.

Spanish comes from the vulgar Latin , the language of the Romans, who ruled the Iberian Peninsula for 700 years. Under the influence of Celtiberian, Basque, Visigothic and later also Arabic, the language developed from Latin. Striking differences are the disappearance of the Latin cases, the softening of consonants (vita became vida) and the diphongonging of short stressed vowels (terra became tierra, ponte became puente).

Political crumbling on the Iberian Peninsula and the different substrates led to the emergence of various related languages ​​such as Portuguese and Galician, which still exist today, and Mozarabic, the Spanish-related language spoken by the Spanish Christians who lived in an Islamic area. The Catalan has not developed from the Spanish, but is separately formed from Vulgar Latin. The first texts in Spanish date from the 9th century. The Cantar de mio Cid, from the 12th century, is one of the oldest long texts in Spanish.

The first dictionary was written in 1492, the year in which Christopher Columbus discovered America, signifying the start of the spread of Spanish as a world language. (The countries that are nowadays Spanish are commonly referred to as Hispanidad.) Since then, pronunciation and vocabulary have developed differently in the old and the new world. In the same year the Jews were also driven out of Spain, so that the Jewish Spanish, better known as Ladino, developed into a third variant.

In the seventeenth century, the language in Spain underwent a number of sound shifts that largely ignored Latin American Spanish and Ladino. As a result of this development, the current Spanish of Hispano America is closer to the Spanish in Europe of 1492 than to that of today. The Real Academia Española was founded in 1713, promoting the unity of the language within Spain. The current standard language is largely based on the dialect from the Toledo area.

In Spain the other languages ​​were banned in 1714 with the rise of the Bourbon House dynasty. Successive despots have more or less actively pursued these other languages ​​in different periods, as a result of which they gradually lost to speakers. The last in that row was the dictator Francisco Franco (himself a Galician by the way), who burned entire foreign-language libraries and had the Guardia Civil write fines for anyone who spoke a language other than Spanish. Since the restoration of democracy in 1975, the other languages ​​in Spain have again been given an official constitutional status and these languages ​​have clearly been revived.

Within the Roman language family, Spanish belongs to the Ibero-Roman branch, which includes, for example, Portuguese, Asturian, Galician and Ladino. These languages ​​are traditionally spoken on the Iberian Peninsula and are so interrelated that a speaker of one of these languages ​​can understand the other languages ​​fairly well. The Portuguese and Spanish appear regarding grammar and vocabulary very similar. It is estimated that 89% of these two languages ​​have the same vocabulary.

Spanish has different variants in both Spain itself and Latin America, which sometimes differ considerably from each other.

The north-south distribution stands out in Spain itself. Spanish from northern Spain is generally considered the purest. Northern Spain is the only area where the difference in pronunciation between the y and the ll is maintained, although it is also disappearing there. The differences in accent between the different regions are striking and make it easy to recognize someone's origin. The Andalusian accent is characterized in that the c (or the z) and the s are both pronounced as s (seseo), except in Granada and surroundings where they sound exactly like c (as the English th) (ceceo), known abroad as the 'dirty' statement. Another characteristic feature of the southern accent is the swallowing of consonants (España is often pronounced as Ehpaña).

The Spanish of Latin America differs in terms of vocabulary, pronunciation and grammar from that of Spain. Latin American Spanish is mostly yeísta, meaning that there is no difference in pronunciation between y and ll. In most Latin America both are pronounced y (Dutch: j), while in Rioplatensian Spanish Argentina and Uruguay as sh are pronounced. Llamar (call) in Argentina and Uruguay as sjamar and in the rest of Latin America as jamar. Just as in Andalusia, there is no difference between s and c in Latin America. Because of this, some linguists believe that the Spanish of Latin America is strongly influenced by the Spanish of Andalusia. However, it is more likely that this change occurred autonomously: after Latin America was conquered by the Spaniards, generations of Indians have learned Spanish as a foreign language, with the difference between ll and y and between s and c being eliminated. In the Spanish-speaking Caribbean and the Canary Islands, mutual influence through mass emigration and remigration in the 20th century clearly noticeable by Canarians. The southern accent and the southern vocabulary have had a huge impact on Caribbean-Spanish, which therefore has a strong resemblance to Canarian-Spanish. Furthermore, in Andalusia, in the Canary Islands and in Latin America, the word vosotros (you) with associated forms is never used. For this one uses ustedes that also the plural form of "you" acts. In Spain, ustedes only have this formal meaning.

The pronunciation and spelling are, in comparison with that of many other languages, fairly simple. The spelling is almost phonetic : for the most part there is a one-to-one relationship between the script and the pronunciation.

Whoever learns the basic rules of spelling and pronunciation, can pronounce any text without any problems after some practice. There are of course different dialects and regional languages with their own pronunciation.

The alphabet has 27 letters, namely the usual 26 letters plus Ñ. The letters K and W do not appear in native words.

The letter combinations CH and LL were previously considered to be separate letters, which came after C and L respectively in the alphabetical sorting (so a word with 11 came after the words with, for example, lu-). Both have been officially deleted from the alphabet by the Real Academia Española, so words with these letter combinations are now sorted letter by letter.

Spanish is an official language in the following countries (Note: Not all residents indicated per country have Spanish as their mother tongue):

Of the above countries, most are monolingual, with only Spanish as the official language. Exceptions to this are Bolivia (with Quechua and Aymara that are also official), Equatorial Guinea (French), Paraguay (Guaraní), Peru (Quechua and Aymara) and Spain itself (Catalan, Galician, Basque, Aragonese, Asturian and Aranese). In other countries there are sometimes large communities that use languages ​​other than Spanish as their mother tongue or colloquial language (examples: several Indian languages ​​in Mexico and Guaraní and Quechua in Argentina).

Spanish has around 40 million speakers in the United States. The majority of these speakers are immigrants, but there is also a part that descends from the Spanish-Mexican population who lived in the southwestern United States when it was captured by the Americans. In Puerto Rico, Spanish is recognized as an official language and the New Mexico Constitution states that the state is bilingual through the use of English and Spanish. Furthermore, Spanish is spoken by significant communities in Brazil, Belize, Guyana, the Philippines, Morocco, Western Sahara and theNetherlands Antilles. Spanish is not official in any of the aforementioned countries and territories. Also in Andorra and Gibraltar, bordering on Spain, Spanish is not recognized. Catalan and English are the official languages ​​there.

"Spanish - Español" is at the 2nd Position in this list. 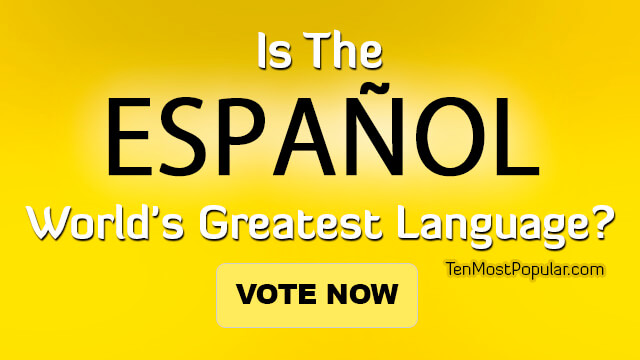