The English is an Indo-European language, which because of its close relationship with languages such as Frisian, (Lower) German and Dutch to the West Germanic languages is considered. The language originated in England during the Anglo-Saxon era and is now the lingua franca in large parts of the world, as a result of the military, economic, cultural, scientific and political influence of the British Empire during the 18th, 19th and early 20th centuries and the influence of the United States from the beginning of the 20th century to the present. English is nowadays widely used as a second or official language in the Commonwealth countries and is the official language of many international organizations. It is one of the six official languages of the United Nations.

Modern English is sometimes described as the first global lingua franca and is the most important international language for communication, science, aviation, tourism, radio, diplomacy and in the business world. The expansion of the language from the British Isles around the world began at the same time as the growth of the British Empire, and at the end of the 19th century the language was truly spread worldwide. The language is dominant in the United States and the growing economic and cultural influence and status of this country as a world power since the end of the Second World War has also strengthened the position of the English language worldwide, making it a true world language.

A good knowledge of English is required in a number of work areas and professions such as medicine and computer science, as a result, at least one billion people master at least the principles of English.

Linguists like David Crystal point out that one of the consequences of the growth of English (like other languages spoken globally) is that linguistic diversity is being lost in many places around the world, particularly in Australasia and North America.

Originally the English language originated from many dialects (Old English), which were brought to England by the Anglo-Saxon settlers, starting in the 5th century. The language was strongly influenced by the Old Norse language of the Vikings. After the Norman conquest of England in 1066, Old English developed into Middle English. Part of that change was the large use of loan words from the Norman vocabulary and the use of Norman spelling rules. Contemporary English developed from there, and continued to record foreign words, especially from Latin and Greek.

English has its origins in the Germanic languages spoken in Great Britain, in particular the language of the Angels, Saxons and Jutes. It is strongly influenced by Old North (thanks to the many Vikings who settled there between 800-1000) and especially the Old French (after the conquest by the Normans in 1066). The grammatical structure of English is therefore still predominantly Germanic, with the exception of some sentence constructions derived from the Romance languages, but of the total English vocabulary much (around 60%) is derived from Old French and Latin. English is therefore sometimes referred to as a bridge language between the world of Germanic and Romance languages.

English is usually periodized as follows:

The English language has been the world's most influential language since the 20th century. This is partly due to the British expansion in the 19th century, which means that English is still the main (official and administrative) language in many former colonies, but mainly because of the culturally and scientifically dominant United States.

The common English-speaking countries and their customs are sometimes referred to as Anglo-Saxon, to avoid confusion with the other meaning of "English", "from England".

English is spoken as a second language by a very large part of the world's population. Considering only the first language speakers, English is surpassed by both Mandarin and Spanish. The language acts as a lingua franca in communication in science, technology and international political and economic traffic throughout the world.

English is also their second language in the Netherlands for many people and for some a first language. In Flanders it is the third language. In secondary education English is a compulsory leaving examination.

English has a very large vocabulary compared to other languages. This is partly due to the fact that there are often two words for one concept: a Germanic and a Romanian (for example, the words freedom and liberty both mean 'freedom'). The difference in use is largely determined by the register: the Germanic words are preferably used in daily life, the Romanian synonyms in official written language. The total number of words in the English language is the subject of discussion, but according to the Oxford Dictionary there are at least 500,000.

Following an investigation conducted on 80,000 words in the Shorter Oxford Dictionary (third edition) in 1973, the origin of the English words is estimated as follows:

A large part of the English vocabulary is of French or langues d'oïl origin. These words were adopted in English via the Anglo-Norman language spoken by the upper class in England in the centuries following the Norman conquest of England. Words of Norman-French origin include competition, mountain, art, table, publicity, police, role, routine, machine and force. In the course of time, these words have been further English, so that they fit better with the English rules in the field of phonology, pronunciation and spelling.

Some French words were only adopted later, from the 17th to the 19th centuries, when French was the dominant language of Western international politics and trade. These words can normally be distinguished because they have retained the French rules for pronunciation and spelling including diacritics. They are often phrases instead of single words. Examples of this are façade, table d'hôte and affaire de cœur. Typical of these words and phrases is that they have retained their original French spelling and pronunciation, because historically the emphasis was on French origin to emphasize that the user of the words was well-educated and well-traveled, which indicated a higher social status of the user.

It Dutch also made a significant contribution to the English language, especially words that deal with shipping. Some fairly common English (often American) words with a Dutch origin are: cookie (cookie), cruise (traversing), dike (dike), Santa Claus (from Sinterklaas), waffle (waffle) bourse (fair) and yacht (yacht (boat)). The word apartheid is also a word that has moved from Dutch to English via South Africa.

"English - English" is at the 1st Position in this list. 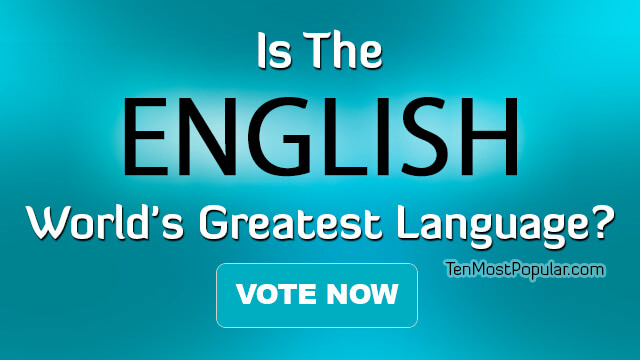