Chinese or Chinese language is a collective name for a group of languages that together form the Sinite branch of the Sino-Tibetan language family. Usually Chinese is understood to mean standard mandarin, the official language of the People's Republic of China, Taiwan, and one of the official languages of Singapore. That standard language is based on the Beijinghua, the Beijing dialect of Mandarin, the largest of the Chinese languages. In fact, Chinese can be considered as a macro language spoken by around 1.22 billion people, particularly in China, Taiwan, but also in other countries of the Far East, including Malaysia, Thailand, Indonesia and Singapore. The language is also spoken by many overseas Chinese.

The Chinese languages have been around for a long time, writings from more than 2500 years ago and Chinese characters on oracle bones that are even older have been found.

There are around 12,000 modern Chinese characters (Hanzi). There have been many more in the past. The Kangxi dictionary, written during the Qing Dynasty, contains 47,035 characters. The recent Hanyu Cidian covers around 56,000 characters, but there are also characters that have since fallen into disuse.

Many characters can have several meanings per se, but usually a word consists of two or more characters, or it can be determined from the context which meaning is meant.

The average Chinese knows about 4,000 characters, 6,000 characters is considered the minimum to be able to sign up for a university education, highly educated Chinese know about 7,000 to 10,000. The complex effect of this script means that many residents of Chinese-speaking areas cannot or insufficiently read or write. According to the CIA-The World Factbook, 14% of the Chinese are illiterate.

Due to the high degree of difficulty of the Chinese script, the communist regime in its early years wanted to abolish it and replace it in its entirety with Hanyu pinyin. However, that brought about the problem that everyone had to be able to read and understand Mandarin properly. Written Chinese would also become very difficult to read due to the many homophones who know the language. Ultimately, therefore, the plan was abandoned. However, the simplified characters were introduced in the 1950s of the 20th century to make writing easier. Opinions are strongly divided as to whether or not Chinese has become easier with this simplification.

A text written in Chinese writing can be understood by any literate Chinese, although two spoken versions of the same text can be completely incomprehensible. If the Latin alphabet had actually been introduced, each language would have its own spelling and written texts would not be understandable.

Whether or not the Latin alphabet could have been an option is still a point of discussion. Just like in Vietnamese, people would be forced to work intensively with combined diacritics. The many homophones in Mandarin Chinese would make a text even more complicated to understand.

To illustrate a famous Chinese tongue breaker. This makes it clear that the characters look different, mean something very different but are pronounced in the same way. It is a short story in classical Mandarin, written by Chao Yuen Ren (1892-1982), a Chinese-American linguist as an argument against the romanization of Mandarin. The text is written with only characters that can all be translated as 'shi'. Only the intonation differs.

There are different ways to transliterate Chinese. In the past Mandarin mainly used the Wade-Giless system, nowadays Hanyu pinyin (also known as pinyin) is used in mainland China, a system that was introduced in 1958. In Taiwan, a mix of all kinds of systems is used, which can seriously complicate reading street signs. For dialects other than Mandarin, there are other romanization systems.

Some examples of the grammar:

Although Chinese is always written in hanzi, the Chinese languages have many common loan words. Most of the loan words originated in the 20th century, when China was confronted with technical and scientific modernization and much was influenced by English. Many loan words are translated by using a hanzi that has roughly the same sound. For example, "sofa" is translated as 沙發 (pinyin: shāfā). 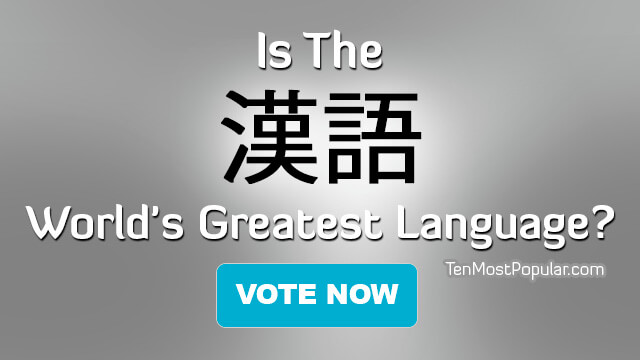 Total Votes: 5143
Votes received:104
Up votes:101
Down votes:3
1.99% Popularity
97% Up votes
3% Down votes
Go to voting page
Comments on Chinese - 汉语, 漢語, 华语, 華語, or 中文
Submit
Cancel
1 Comments
As a language, it is the largest number of people in the world using this, one-fifth of the world's population as a native language.
0
0
Reply